“We take seriously the mission of being a truly great public university.” 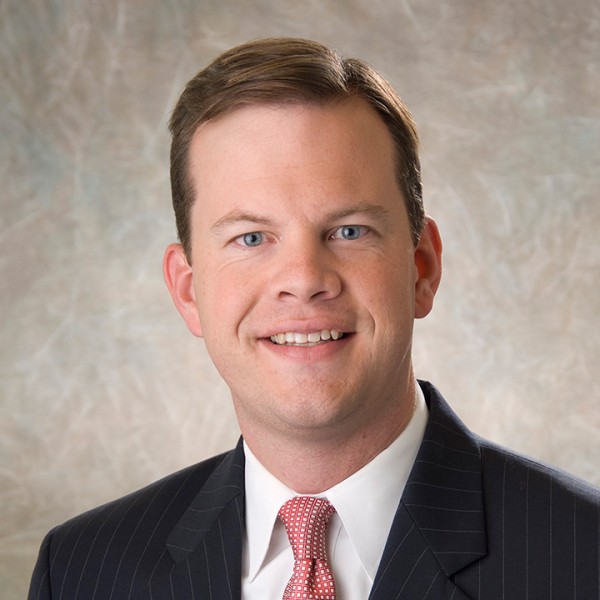 While my story is not worthy of this impressive group of board members, I am honored to be able to share it. It is not a unique story but one shared by many young men and women who have been deeply impacted by our great University. It involves lifelong friendships, experiences that stretched my horizons, mentors who helped shape my career, and lessons about the importance of giving back. But for me, it started with my father.

I am the ninth generation of Simpsons who have lived in North Carolina. I am the first generation to be raised outside of Iredell County, north of Charlotte. You see, other people talk about their family tree — I have more of a family trunk.

I am only the second generation to graduate from college. My father, Dr. Larry Simpson ’69, was the first. He left his family at the farm and at the mill in the town of Troutman in Iredell County and came to Chapel Hill in 1965. Carolina made a big impression on my dad and shaped his career. It not only set him on his path to a medical degree but also gave him his greatest hobby — following UNC athletics. He loves to tell the story that he only missed one home basketball game in Carmichael all four years he was in Chapel Hill — and that one game was when he had to study for a science test and Bobby Lewis ’67 scored 49 points (which is still the most ever scored by a UNC player). He vowed never to miss another game.

After graduating and going to medical school, my dad became a small town family doctor in Asheboro. His No. 1 passion and hobby was taking my mom, my sister and me to Carolina sporting events. Some of my earliest memories involve tailgating with my family outside of Kenan Stadium on beautiful fall afternoons. And I remember vividly attending the first game in the Smith Center in 1986; it was also the first of many Carolina-Dook games I would share with my father.

So my trajectory to Chapel Hill was not guaranteed, but it certainly got a big boost from my dad’s passion for the Tar Heels.

My path to Carolina was actually cemented during the summer after my junior year in high school, when I attended Governor’s School at Salem College. There I met Aaron Wright ’97, a basketball star from Franklinton, who had a similar story to mine — growing up in a small town with a father who was a UNC alum. We bonded over our shared experiences attending Dean Smith’s Carolina basketball camp as kids. And we decided that summer that we wanted to go to Carolina together. We ended up living as roommates all four years of college.

Heading into my senior year, I was 100 percent focused on attending UNC. I only applied to one college — it was Carolina or bust for me. Thankfully, the competition in Randolph County was a little different than that in Wake and Mecklenburg, and I was accepted.

As a freshman in the fall of 1992, I somehow had the good fortune of landing on North Campus in Graham Dorm in a room with an A/C unit. (Aaron somehow had a doctor’s note that said his asthma required him to have A/C. Thankfully, no one asked him how he became an all-state basketball player with such a bad case of asthma. And who was I to question a doctor’s note.)

My first-year experiences were like those of many other Carolina students: (1) the feeling of being overwhelmed with the size of the school for the first several weeks on campus; (2) figuring out how to balance tougher classes with the freedom to play pickup basketball all afternoon at Cobb courts and Woollen Gym; (3) meeting really smart, interesting people with incredibly different backgrounds from mine and realizing that we usually could find a lot in common; and (4) for those of us attending Carolina in the early ’90s, the quintessential late nights with DJ Joe Bunn.

My freshman year concluded in the spring of 1993 on a high note as Coach Smith brought home his second national title. I was one of 20 people crammed into a tiny Granville Towers dorm room. Following that famous Chris Weber timeout, we exploded out of Granville and stormed Franklin Street to celebrate. I had a prime spot for the next five hours watching the celebration from my perch on top of the bus stop outside of School Kids Records.

The summer following my sophomore year was very formative for me and helped introduce me to both the General Alumni Association and to my future career in N.C. public policy. I was fortunate enough to be selected as an Institute of Government intern and had a chance to spend the summer in Raleigh learning about state and local government. We were each paired with a summer job with a UNC grad, and I was lucky enough to get to work with Wake County Manager Richard Stevens ’70 (’74 MPA, ’74 JD). At the time, Richard was also a trustee at UNC and had just rolled off serving as chair and longtime treasurer of the GAA. Before that summer, I had career goals to move to D.C. to work on federal or international policy issues. But Richard opened my eyes to how you can make a difference in public service closer to home — at the state, local and university levels.  e also took me on my first trip ever to the N.C. General Assembly. Little did I know that summer that Richard would go on to become a lifelong mentor to me (and now a colleague at Smith Anderson) and that I would be visiting the General Assembly many more times in the years ahead.

I followed up that formative summer, with what became my favorite semester in college. But it was not in Chapel Hill. I participated in the Honors Program semester abroad at the London School of Economics with poli sci Professor Jeffrey Obler. Our small group of 20 UNC students managed to cram our classes at LSE into the middle of the week so we could have long weekends to explore Great Britain and continental Europe. It was a game changer for me in terms of broadening my horizons.

I returned back to Chapel Hill for the spring semester of my junior year to live in a giant 12-bedroom duplex at Ashley Forest off of what is today Martin Luther King Boulevard. I thought that duplex should have been condemned when we graduated, but somehow it is still housing Carolina students today.

The 11 other guys I lived with were some of my best friends from my first two years at Carolina, and they remain some of my closest friends today. Our families travel together, many of us have UNC season football tickets together, and last April we all gathered together at The Carolina Inn from around the country to be close to Franklin Street to cheer on the Heels on their way to another national title. It was 24 years after we stormed Franklin Street as freshmen, and I can attest that celebrating a UNC national title that way never gets old.

My junior year also introduced me more deeply to the General Alumni Association through my participation in the Order of the Bell Tower. I met the one and only Doug Dibbert ’70 and had a chance to work in the Chancellor’s Box during football games. My favorite OBT memory was from a celebration at the DuBose House at Meadowmont that involved Charles Kuralt ’55 as the emcee. Rather than spend the evening with all the VIPs in attendance, Kuralt chose to stay outside all night, smoking cigarettes and telling his own UNC war stories to the handful of Carolina students at the event. It was a memorable evening.

My senior year involved a lot of pickup basketball, my fair share of trips to He’s Not Here, the grand opening of Top of the Hill, some great public policy classes (that was my major) and my first foray into the N.C. legislative process. I took Professor Thad Beyle’s N.C. politics class, and that spurred me to get an internship at the General Assembly with then-Speaker of the House Harold Brubaker (who happened to represent my hometown of Asheboro).

That internship in the speaker’s office turned into a full-time job after I graduated in the spring of 1996. There I had a chance to witness many great Carolina graduates working in public service. Watching the GAA’s very own Senator Tony Rand ’61 run a Senate Rules meeting was the equivalent of a doctoral level class in the legislative process. I also witnessed how much senators Rand and Marc Basnight cared about UNC. The investments they made then have helped shape the world-class University we have today. (For that, we all owe you a big thank you, Tony).

After a brief flirtation with the idea of going to law school at UVA, Richard Stevens and then Law School Dean Judith Wegner helped me come to my senses, and I returned to Chapel Hill to attend law school.

Law school was an entirely different beast compared to undergrad. I still found time to play pickup basketball at Woollen Gym, but such breaks were much more the exception than the rule. My single worst memory of law school involved cite checks for the Law Review. As an undergrad, I only knew Davis Library as the quiet library (compared to the Undergrad) where I could escape to the fifth floor and study during exams. I sure did not know that Davis had a basement — but I do now. I spent a beautiful fall Saturday in the basement of Davis library — missing a Carolina football game so I could check for proper citations to Native American treaties of the 1800s. Needless to say, it is not one of my favorite Carolina memories.

While law school was rigorous, it also exposed me to a whole new group of future Carolina leaders. People like board member Greg Parent ’92 (’98 JD), who was a 3L class leader my first year in law school.

My Carolina law school class of 2000 is a great example of Carolina students who have gone into public service to give back. My classmates include Emin Toro ’00 (JD), a emigrant from communist Albania who went on to clerk for U.S. Supreme Court Justice Clarence Thomas, former state senator and U.S. Senate candidate Cal Cunningham ’96 (’00 JD), current state Senator Warren Daniel ’00 (JD), and current state Representative Ed Hanes ’95 (’00 JD). And that list doesn’t even cover the many other classmates who are serving in local office and with charitable organizations.

That sense of public service and the importance of giving back to our community, state and nation is something that helps make Carolina stand out among its peers — we take seriously the mission of being a truly great public university.

I pray that it will always be that way.