“I had six younger siblings that were watching me” 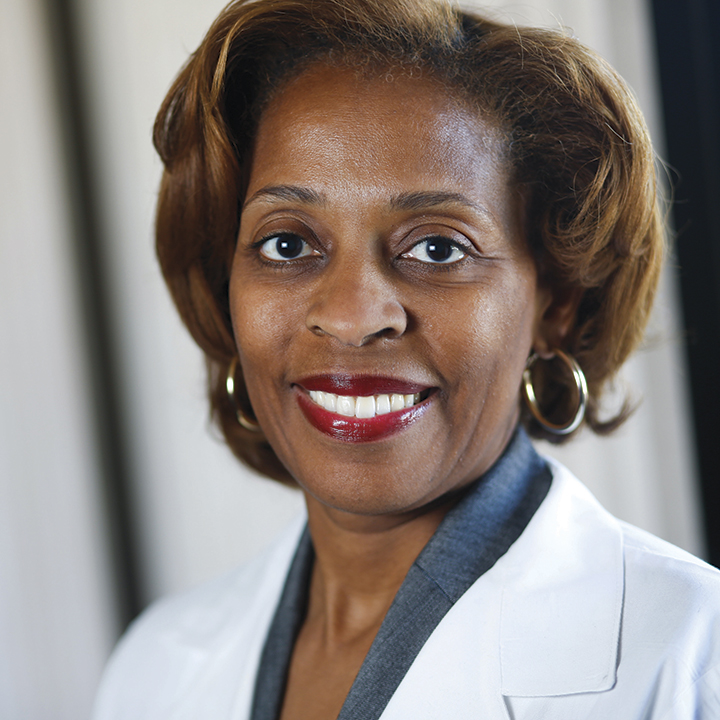 Good morning, everyone. I have a lot to say, but I’m going to keep it short. Many of you don’t know me, and a lot of you do know me. There has been a lot of talk about my five degrees. I do have five — they were hard-earned, and they’re all from UNC.

My Carolina story — folks might look at me now and say, “Wow — look at what she’s done and what she’s accomplished.” My accomplishments start way back, and they weren’t always easy.

I am a product of that great state of Mecklenburg County. I grew up one of 10 kids. I’m the fourth-oldest. I have seven sisters and two brothers, and one of my brothers is deceased now. I grew up in a family that was very poor, very underprivileged. I had a father who had a third-grade education who I didn’t realize was illiterate until I was about in middle school. I thought sitting in his lap and reading the paper to him was showing him how smart I was. But I didn’t know. I also had a mother and have a mother who is a wonderful lady who had all those kids, but she only had a ninth-grade education. She was a domestic housekeeper for most of my middle school and high school years. When I was younger, she stayed home. And my life had a lot of turmoil. My dad was very abusive. He was a long-distance truck driver, and so that’s when we got a lot of our peace growing up.

One of those places that I found peace was at school. School is where I seemed to flourish, spent most of my time and enjoyed it. But I was one of those kids that Dr. [Jim] Johnson talked about. I was not “college ready.” And nobody was really interested in me being college ready. We were just surviving. So by the time I got to high school, I figured I would just go to the community college. Central Piedmont Community College was kind of like the mecca in education in Charlotte at the time. I grew up during the time of desegregation — a lot of busing starting, a lot of riots in Charlotte. But those things were kind of peripheral, because we were living day to day.

When I got to high school — before I got there, I was a sickly kid. I had severe asthma, I had severe allergies, and I was severely anemic. That was a great combination for spending most of your time in the emergency room, where I spent a lot of time. But the great thing about then was there was no such thing as inhalers. They gave you a shot of something called adrenaline. I didn’t realize what “high” meant until after I got a little older and I realized I was just as high as some of those guys that were standing on the corner — alcoholics that I knew — walking to and from school. But it was a great feeling, and it certainly made me feel better and breathe better.

But once I got to high school, I decided I would be a dental hygienist. I met this guidance counselor, and she said, “I think you’re gonna go to college.” I said, “Yes, I’m going to college, I’m going to go on to Central Piedmont Community College.” She says, “No, you’re going to college.” I had no idea what that meant, because nobody in my family had gone to college, and that was probably as foreign as being in another country to me. So she insisted that I take the PSAT, which I did. I must have performed well, because she then insisted that I take the SAT, which I did. I received college applications from most of the major universities in the state and some out of state and I had kind of made up my mind that I was going still to Central Piedmont Community College. So I applied to college — I applied to only one. I guess you can guess what that was. And I was accepted.

And I came to UNC as a 17-year-old freshman, not college ready. My first two years at UNC were very challenging. The first year, I had 18 hours my first semester. My counselor at the time was the dean of a college, and I said, “I have 18 hours — isn’t that a bit much?” He said, “Oh, no, you can do it! It’s great — you’ll do fine.” Needless to say, I did not do fine. It was not a good experience, but I did it, I made it through, and my second semester, I got pneumonia. I spent a week in the infirmary with pneumonia, and there was snow on the ground. I remember when I came out I said, “I’ve got to go back to class now, and I’ve got to get my act together.” So I struggled through that semester and made it to my sophomore year, still struggling, but realized this place called Carolina was fun. I then decided that I should have a good time. If I was going to work that hard, I might as well have a good time doing it. I learned how to go to parties, learned how to play backgammon and spades and learned how to stay up all night and show up to class late. I wasn’t college ready.

After my sophomore year, something hit me. I don’t know exactly what that was. I prefer to think of it as being God saying, “OK, I’ve had enough, I have a plan for you, and you haven’t been following it too well, so it is now time for you to follow it.” I thought about where I come from. I thought about that I was one of 10 kids with a very difficult background and that I was the first one in my family to go to college. I had six younger siblings that were watching me. And so I decided to get my act together.

From that point forward, I took about 18 hours a semester. I made only A’s and B’s. I got to my senior year and decided that a BA in zoology was great, but I really didn’t like animals that much. I liked them OK, but not that much. So I met a friend who had a friend who was in dental hygiene school. See, I had forgotten about dental hygiene school. I said, “That’s what I was gonna do when I was in high school!” And she said, “Well, you still can! You need to go talk to the director.” So I did. I went to the director. This was the spring of my senior year in 1982. I went to talk to her, and she said, “Give me your stuff.” I got her all of my applications, all of my “stuff,” and I was accepted into the dental hygiene program at UNC School of Dentistry.

When I was accepted, I was also diagnosed with something called Behcet’s Syndrome. I got really sick to the point where I couldn’t see very well; severe, severe headaches. They had to bring a guy down from Johns Hopkins to diagnose me. But somewhere between the steroids and all the prods and poking, I got better. I finished dental hygiene school. At the end of dental hygiene school, I got a letter from the admissions director at the dental school. It said, “If you want to go to dental school, come down and see me.” I took the letter and stuck it in my book bag and said, “Well, I absolutely love dental hygiene.” It was the best thing I could ever think of. They told me that when I was doing dental hygiene that after about five years, you burn out. And then you have to go back to school. If you look at my background now, it’s kind of funny. But then, I was like, “I’m not going back to school after five years!” So I went down and talked to him, got my stuff and was accepted into dental school before I graduated from dental hygiene school.

So I did dental school and after dental school, did a residency in hospital dentistry, did a fellowship in that program, got a master’s in public health and then, after that, got a Ph.D. in oral biology. It’s like I caught the bug.

Carolina has always been home to me. It was a place now where I could see why it is the place that it is. I was constantly challenged by people. I was not allowed to look at myself any different from anybody else who was here. I was given the same opportunities, and I was pushed to be better than I ever thought I could be.

Once I finished my Ph.D., I was offered a job as chair of hospital dentistry and chief of oral medicine. I did that for 11 years. Then some folks in Nashville, Tenn., came knocking. How they found me, I’m still not sure, but they wanted me to be the dean of the dental school in Nashville. So I’ve been in Nashville for probably two years and about three months. I didn’t think there would be another place on this earth that I would like living in or at other than Chapel Hill, but Nashville is coming up. They’re making a mark.