“A university’s greatness may be measured more by its impact on the world around it than by the erudition of the scholarship within.” 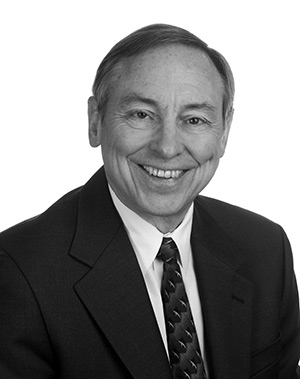 I’m not a Tar Heel born, nor a Tar Heel bred, so I have listened with awe and admiration to other board member stories of extended family connections to the University. My story is very different. I could even be called an “Accidental Tar Heel.”

I grew up in Nashville, Tenn., grandson of Pennsylvania coal miners and son of a minister, first in his family to attend college, who moved to the South to help Methodists desegregate. I went to a large public high school where 97 percent of my class continued to higher education — but I had never heard of Carolina. My class had three foreign exchange students, and I wanted to spend a year abroad. I got to go, but to Germany, although I had never had a day of German class in my life.

Lacking language skills, I subscribed to Time magazine to keep abreast. That October was the Cuban Missile Crisis, and the November issue describing Soviet missile removal also had an article about UNC. Some quotes: “the conscience of North Carolina,” “the most enlightened state campus in the South,” “something in the air,” “tolerance.” The final sentence: “Chapel Hill is the right place for ‘a man with a purpose.’ ” Sight unseen, I applied from Germany.

Nine months later, I was part of the Freshman Honors Program. We lived together in Craige and had special classes taught by full professors (no TAs). It was the year the Beatles first came to the U.S.

I had great friends, great profs — but I’d made a terrible mistake. Where were the girls? An hour away at some place called W.C. (Woman’s College)! Time magazine had said “the right place for a man with a purpose.” I had missed an important nuance.

Freshman year was Dean Smith’s third year as head coach, and basketball was just beginning its comeback, with Billy Cunningham ’65, the “Kangaroo Kid,” leading the way.

One searing memory of my freshman year was walking to geography class, on the Playmakers Theatre steps, and learning that President Kennedy had been shot.

But the broader political dimension that year was civil rights. It’s hard today to appreciate fully how different Carolina was then: overwhelmingly white, no black scholarship athletes, marches down Franklin Street protesting segregated restaurants. Students and professors being arrested, and alumni urging that they be disciplined. Student Body President Mike Lawler ’63 took a courageous stand: No student organization funding could be spent at any establishment that did not serve all students.

My sophomore memories include the debate team and student politics.

The debate team traveled to national tournaments in Atlanta, Chicago and New England, and my partner Bob Powell ’67 and I did OK.

Back on campus, a strong two-party political system produced heated campaigns for student government offices. I joined the Student Party (and was its unsuccessful candidate for student body treasurer). UNC also was active in the National Student Association, and I attended regional meetings and was a delegate to its convention.

A landmark Tar Heel event occurred during my sophomore year, in January ’65: Dean Smith was burned in effigy. While the burning followed a basketball loss, I suspected Dean’s civil rights activity also had something do with it. Despite passage of the federal Public Accommodations Act, The Pines restaurant refused to serve Negroes. The previous semester, Dean Smith and pastor Bob Seymour accompanied a black student there. The basketball coach could not be turned away. The Pines was integrated.

My junior year brought a lot of change. I was a resident adviser in Morrison, along with Mel Watt ’67, and we had great advisees like Bland Simpson ’70.

The most significant month of my junior year was March. The Speaker Ban Law remained in effect despite many efforts to end it. Meetings with lawyers produced a plan. A scholarly Marxist history professor, Herbert Aptheker, was invited to speak. When Student Body President Paul Dickson ’66 began to introduce Aptheker, Campus Police Chief Arthur Beaumont stopped him, citing the law. So Paul and Aptheker crossed the wall to the Franklin Street sidewalk (technically off campus) and spoke. These events led to a federal lawsuit — Dickson v. Sitterson, 3/31/66 —  which resulted in the law being struck down as unconstitutional. As head of the Carolina Political Union, I was one of a dozen students who personally signed the lawsuit as a plaintiff.

Later that spring, my debate partner Bob Powell was elected student body president, and I became “special assistant to the president.” That summer, I was an N.C. Center for Education in Politics Congressional intern. But before going to D.C., I went to Mississippi to be a poll watcher for the Mississippi Freedom Democratic Party. After a 20-hour drive, we arrived in a small town in the Delta. Our first news was that James Meredith had just been shot on his March Against Fear less than 40 miles away.

My senior year was great. Bob Lewis ’67 led the 26-6 Heels to the ACC Championship and Final Four, turning the corner for Dean Smith, who also signed Charlie Scott ’70 that year as our first black scholarship athlete.

The Vietnam War was a huge issue, and we worked to increase anti-war opposition. Bob became one of more than 200 student government presidents from across the country who signed a letter to LBJ. It got national publicity as an indication that antiwar sentiment was becoming mainstream.

But the most dramatic event of my senior year came in February ’67. It started with a 3 a.m. phone call from Al Lowenstein ’49 saying: come to D.C. — fast. I was one of the 10 governing board members of the National Student Association. A disgruntled former employee had told Ramparts magazine the ridiculous story that the National Student Association was secretly funded by the CIA, and the board needed to respond.

A day or two later, we were stunned to learn that the impossible was, in fact, true. Each year, one or two key staff persons had been induced to sign secrecy oaths, then told of secret funding for NSA international activity and a good part of its budget. This was part of the Cold War battle for the hearts and minds of student leaders from developing nations, many of whom would become future cabinet ministers and heads of state.

We had to confront this history, stop further NSA information going to the CIA and try to avoid financial collapse. A meeting with the CIA had to occur. Somehow, I ended up being the board member who went. I went with Washington lawyer Joseph Rauh out to CIA headquarters in Langley, Va., where we were taken up the director’s private elevator to meet Director Richard Helms. What’s the head of the CIA like? Helms was surprisingly low key and business-like, and I’m still amazed that we emerged with an agreement that 1) the story would be told, 2) no more NSA information would be provided, but 3) the agency would provide transition money to keep NSA afloat while it sought alternative funding. I was 22 years old, and I returned to Chapel Hill, chagrined that I had been so totally duped.

The final significant event of my senior year was much happier. On Jubilee weekend, a music group called the Association was performing their hits, including one called Along Came Mary. For me, it turned out to be Along Came Laurie. It was my first date with Laurie Gray Williams ’68 who, five years later, became my wife at a ceremony here in the Botanical Garden. We just celebrated our 40th wedding anniversary, and we are delighted that our daughter-in-law, Shannon Smith Van Loon ’00, is a Carolina grad from High Point — and a GAA life member!

Two final thoughts. When Doug approached me about this board, I resisted. I was totally busy, no time to take on anything else. I even asked how many meetings I could miss without getting kicked off. Now, I try never to miss a meeting. I know I don’t contribute much, but I never fail to come away without feeling inspired, awed and energized by learning what the University is doing and being reminded how the values learned here became pillars in my life.

A second thought is also from (wise man) Doug, who told me, “Everybody says the three years fly by so fast.” They have. My advice: Take advantage of every minute of GAA board activity you can! You’ll never regret it.

I asked my editor son to read this. “Dad,” he said, “there’s nothing here about how Carolina shaped you or what life lessons you learned.”

So herewith my four personal takeaways from Carolina:

1) A university’s greatness may be measured more by its impact on the world around it than by the erudition of the scholarship within.

2) Public life is a constant struggle to improve the human condition, and those resisting will almost always be more numerous and powerful than those advocating change.

3) It takes action to implement idealism, and action is often personally uncomfortable, and can be risky: physically, fiscally, professionally and personally.

And my fourth and final life lesson from my time here …

Basketball is really, really important to a rich and balanced life!

And thank you so much for listening to this “accidental” Tar Heel.