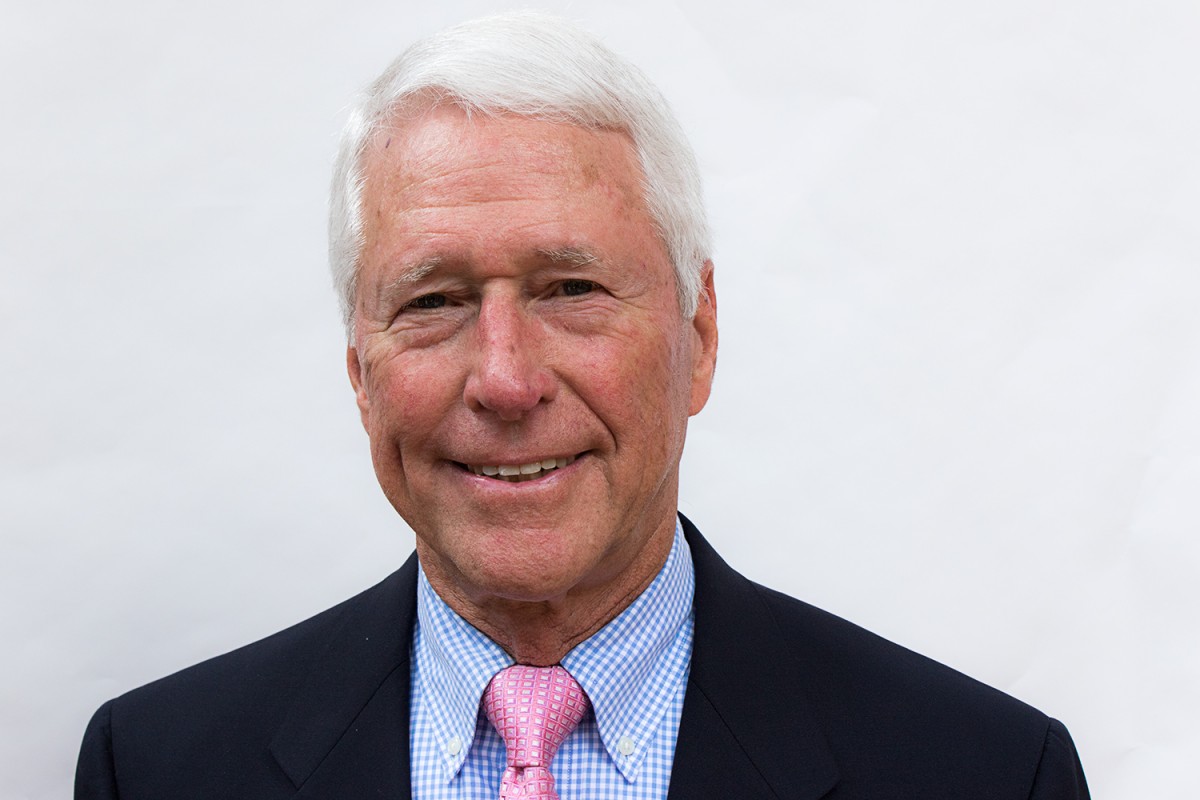 I’d like to begin with the most important part of this presentation. Please join me in recognizing and complimenting our president and his staff for their very valuable and professional service to this association and the University.

Carolina … priceless gem. It really is, you know. About five years ago, Jack Betts [‘68] stepped up and delivered a wonderful account of his life and times at Carolina. I was taken with the detail and the experiences he described. I immediately was carried back to those early days of my own in Chapel Hill. Life is so complex and demanding these days, but I find that if I focus my thoughts on yesteryear by myself or spend time talking with a friend from those earlier days, the vivid memories become clear, and the precious detail is once again captured and enjoyed. That’s it. That’s all it takes to see ourselves and our friends once again … as it was then.

Friendships — that may be the most valuable result of being and studying at Carolina. Real friends. The kind that you can see and enjoy anytime; the kind who really care about you and you about them; the kind you can see after five or 10 years, and it’s as if you had never been apart.

My story begins with my first trip to Chapel Hill. My father, who had attended the first two years of medical school at Carolina (that’s all they had back then), finished his last two years at Vanderbilt. He had made several other stops before coming to teach at the School of Public Health here in Chapel Hill. Little did I know what was in store when I showed up that first time I came to Chapel Hill. I was 2 days old. Guess you could have called me the new kid on the block at 210 McCauley Street — just about two blocks and around the corner southwest from the Carolina Inn. So I spent the first couple of years of my life on McCauley Street and being around and on the campus. OK. I guess I have to say it. I was born in Duke Hospital! They took good care of me.

My family came to live in Raleigh as I started the fourth grade, and by the time I was in my early teens, I was coming with a carload of buddies to football games at Kenan Stadium as often as we could. Another early memory was coming to the Morehead Planetarium, which was relatively new in those days, and marveling at the presentations there. The lights would go down, except for those illuminating the silhouettes of familiar buildings in the town surrounding the planetarium, and the narrator commenced with a distinctive and pleasing voice to provide a captivating look into the heavens. I was fascinated. Years later, I would be invited to apply for the astronaut program but did not pursue that opportunity.

In the fall of my senior year in high school, I applied for the Navy ROTC program, was accepted and was assigned to my first choice of schools — the University of North Carolina. In late August of 1957, I reported for duty at the Armory, that brick building with a flagpole on the corner of McCauley Street and South Columbia Street. I was a midshipman 4th Class, the bottom rung of the ladder, as I began my courses of study at the University.

My freshman year was fun and exciting — a new world of activity. Lots of old friends who were from Raleigh (and Garner) and new friends made easily. I had elected to major in chemistry to pursue the requisite courses that would lead to an MD as well as satisfy the prescribed courses such as math and physics for the NROTC program. It was an ambitious start. I lived in Steele dormitory, just down the steps from South Building. Perfect location — two minutes to the snack bar in the basement of Lenoir Hall, three minutes to the library to study and four minutes 48 seconds to get to the Armory for that eight o’clock class every day. Later that year, I pledged a fraternity — Phi Delta Theta — and I lived there for the next three years. Yep, a block and a half from my first home on McCauley Street and across the street from the Armory. I felt right at home. Close to chemistry labs at Venable Hall, just a few steps to the Armory, next door to the pharmacy school library, where we had a great atmosphere for learning. The girls from Whitehead dorm across the street also seemed to like the pharmacy library for studying. It’s a good thing we weren’t distracted by their presence.

I believe I had a fairly good work ethic, and that helped. I was in an atmosphere that was friendly and encouraging to do the right thing. I guess we were all a product, individually, of our family and community upbringing, which carried over to our behavior on this campus. For me, Carolina was a haven for learning, for a variety of activities if so desired, and a multitude of friends. Academically, the naval science course was probably my most demanding: 80-plus pages of reading and a quiz every day during most of that first year. That had to be a priority since I had made the commitment to the program. Spanish class, my third year of taking that language, turned out to be one of the most useful and practical tools I acquired, and I used it in travels during my career in the Navy. Many trips to the Mediterranean Sea with port visits in Spain and Majorca, and the Italian language was easy to pick up with a Spanish background. My last three years on active duty, I was stationed in Puerto Rico where Spanish is still the native language.

In general, while I did have some science and math, I credit my liberal arts background for preparing me to write and speak effectively in a military world where those communication skills became quite important. I have frequently been asked whether I would rather have attended the Naval Academy. My answer has always been a resounding “no!” I certainly respect the education and preparation for a naval career provided by the academy, but here in Chapel Hill, I had excellent professional guidance and a whole lot more.

I look back on my professors with respect and appreciation for their contributions to my growth and understanding. My favorite “professor,” if you will, was Walter Rabb, head baseball coach at Carolina for many years. Playing with him as a mentor — learning baseball — how to win and how to lose, how to think and react and take charge, how to know yourself and your limitations, and how to improve yourself when needed — were all important tools that could be applied to many of life’s challenges. He was wise and, as with the physical skills, he imparted many principles of common sense that were good for a lifetime. I’ll always remember many home games when then-Chancellor Robert House [class of 1916] would sit in the dugout with the team and was “just one of the boys.” He seemed to have fun, and we enjoyed his company.

We played at Emerson Field, which was situated on the corner diagonally across from Woollen Gym. Our 1960 team, on which Vaughn [Bryson ’60] and I played together, was fortunate to make it as the first Carolina team to advance to the College World Series. In today’s parlance, I guess you could say we made it to the “elite eight.” It was a great season for our team, but we lost our first two games in the double elimination tournament in Omaha and dropped out of the race for the national championship. My desire to play baseball did affect my academic pursuits — because of the heavy load of chemistry labs in the first two years, I decided to switch majors — from chemistry to English — to eliminate the labs and enable me to have more time for baseball. At the time, it seemed like the thing to do.

It has been many years since I left these familiar and comfortable surroundings. Because of the nature of my work with the Navy — the demands on time and the travel to faraway places for extended periods of time — I have been unable to return to Carolina as often as I would like. I did return in 1989 to speak at the commissioning ceremony for the Naval ROTC, and in 1992, I was invited to participate in a football halftime ceremony commemorating the 50th anniversary of the NROTC unit here in Chapel Hill. The game that day was Carolina vs. Navy. I was in my white uniform and was walking down through the campus toward the stadium. A couple of guys came up and recognized the Navy uniform. They said, “Well, I guess we know who you are pulling for in the game today.” I said, “Yes, I’m pulling for my team … Carolina. This is my school!” The reply was, with a chuckle, “Cool, man!”

I am thankful for the opportunity to have participated in the General Alumni Association. Returning to the campus, sharing in the activities and mission of the GAA certainly provide a sense of belonging. Being with old friends and making new ones, as I said earlier, make up the glue that holds us together. My compliments, again, to you, Doug [Dibbert ’70], and to your exceptional staff for your collective efforts in this regard.

In my 32 years in the Navy I have traveled rather extensively. I have been as far north as the Arctic Circle, as far south as Brazil, as far east as Istanbul and as far west as the Indian Ocean. I have encountered friends from Carolina in Istanbul and in the South China Sea and many others in between. Friends who know or others who learn that I have attended school in Chapel Hill, without exception, smile and have compliments for Carolina, whether they have been here or not. The word is out: Our reputation is strong. Let me take this a step further. In the early ’70s, I lived in San Diego for three years. Wonderful place to live. My family was happy; I was doing well in my work. Life could not have been better. I moved away from San Diego but have been back many times since. Whenever I arrive in San Diego, I get out of the car or plane, take a deep breath and have a wonderful feeling of satisfaction … of just being there, of just being.

There is another place that evokes that same kind of warm, comfortable feeling. I can tell you that whenever I drive up the hill and arrive … here … in Chapel Hill, on this campus, I have that same feeling. It is, indeed, a priceless gem.