“A Tale of Two Carolina Stories.” 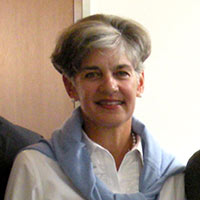 Let me set some context. … My high school years spanned 1968 to 1971. The fun part of my high school years included being head cheerleader, homecoming queen and participating in student government. The more serious part involved trying to work through racial tensions in my hometown of Wilmington and, like so many others, trying to understand the Vietnam War. While I learned a lot in high school about life and conflict and government, I didn’t get a lot of “book” learning.

I came to Carolina in 1971. I was the younger sister of a Morehead Scholar. I was anything but …

Pretty much overnight, I turned in my saddle oxfords and cheerleading uniform for Birkenstocks, bandanas and hippy skirts and arrived at Granville Towers. My musical tastes included Jimi Hendrix, Janis Joplin and the Grateful Dead.

Given my tendency toward “hippie-ness,” my college experience may have been somewhat different from some of yours.

The first word on my first blue book exam in American history was “juxtapose.” I had no idea what juxtapose meant, so took my 17-year-old self with tears in my eyes to my professor, Peter Filene, and asked him. He kindly explained.

I received an AB on my transcript for calculus — which I probably tried to pass off to my parents as my professor’s equivocation about whether I got an A or a B. But what it really meant was Absent from Exam, and it fit into my GPA as a 0.

I received some great feedback on an art history paper. My professor said that I had a “pseudo sophisticated” writing style. I think that meant that I tried to put at least one SAT word in each sentence. I kept that paper until recently.

Just imagine being my parents. … My report card includes classes like Children of the Kibbutz, Guerilla Warfare, Women’s Fear of Success and classical guitar. I participated in consciousness-raising sessions both on campus and off campus at He’s Not, holding a foosball table with my consciousness raised by Miller Light.

I was a groupie for Arrogance, a band that played at the Cat’s Cradle. I had a huge crush on lead singer, Don Dixon. Dancing on bar tables was not unknown to me. And for those of you who were here then, I was a hostess at Tijuana Fats on weekends.

I worked in Wilson Library. I transliterated Russian script to English letters and filed Russian texts and recorded them in the card catalogue. The lady I worked for was also a great darts player at another of my consciousness raising sites, The Cave. Though I am not sure why they gave me this job, I also babysat at University Presbyterian Church. What is the miracle of all this? My parents kept paying my tuition.

Here are some of the things that I learned.

I learned that juxtapose means compare and contrast.

I learned that you write better if you skip the SAT words.

I learned that interactions with people who are different from you exposes you to different ideas and you grow from that experience.

In other words, I grew up here.

After graduation, I got in an orange VW bus — of course I did — and drove to California. Two months later, I was back in Chapel Hill and worked again in Wilson Library. I was the secretary for the head librarian — great use for a psychology major, right? After I had been in my job for a few months, he dictated (tape-player, not shorthand) a note for me to type to his former secretary and said to her, “Wish you were here!” I changed jobs soon thereafter.

I followed my psychology degree to work in the N.C. Men’s Prison System for two years. Here’s one of many stories I could tell from that experience: A young man serving time in Raleigh wanted to be transferred to the minimum-security Orange County prison unit so he could be close to home and go back to school; I believed him. I advocated for the move. He escaped.

I had decided that prison work wasn’t for me, and my GPA, as you can imagine, was not going to get me in to graduate school at Carolina. So, I left the fold to get an MBA from Wake Forest. There I learned that I had a pretty good grasp of numbers and finance. I really enjoyed my studies and graduated near the top of my class. What a difference a few years will make. And it required a new pair of shoes.

Things have a way of working out. I interviewed with this company called Ciba-Geigy and found out that only women were being interviewed for the position of financial analyst. I got the job. Turns out, my first job in this company, that would span the next 26 years of my life, was an affirmative action position. That gave me an extra dose of motivation.

My two children came along during the early years of my career. During those 26 years, I worked and lived in Greensboro, Baton Rouge and commuted to and from New York for two years. My industry was agribusiness, so I spent a lot of time in corn-growing states. Imagine the joys of a farm implement/pesticide trade show in the Twin Cities in January.

I traveled to our home office in Switzerland over 70 times. I’ll toot my horn just once, to show that even a lousy student with a diploma from Carolina can have some measure of business success. Just before I retired, I was recognized in the Basel, Switzerland, newspaper as the highest-ranking woman in our 20,000-person company.

My company experience caused me to travel to all the continents except Antarctica — not a lot of agriculture in Antarctica. I met people from all over the world who I still consider friends. And I believe that diploma from Carolina helped open many doors for me. I learned to learn. I learned how much I didn’t know. I was humbled.

A few years ago, I started taking online classes at Carolina. I’ve made A’s in all of them to the chagrin, I am sure, of my fellow, and much younger, classmates. My husband decided to determine how many A’s I need to get my cumulative GPA up to a 3.0. I decided I don’t have enough runway left.

A word about my family. Tolerant, loving and kind. They are always and forever at my core.

And now for my current pair of shoes: My husband (and best friend) and I recently hiked the 500-mile French Way of the Camino de Santiago, a centuries-old pathway through the north of Spain. There we saw evidence of UNC — perhaps we saw what we wanted to see — but a small blue foot painted on a rock, (missing the tar on the heel, but hey, it’s Spain!), a Carolina blue and white flag, and a house painted Carolina blue. We were sure they were signs calling us home.

Over the years, I’ve served on the UNC Board of Visitors, Steve and I chair Lineberger Comprehensive Cancer Center’s board, we serve on the executive committee for the Global Leadership Council, and we have mentored students in the entrepreneurship program. So, even though my term at the General Alumni Association is ending, we will still be hanging around campus, doing what we can. Thank you for the privilege of being and insider in the Carolina family.

I hope you now understand why I called this “A Tale of Two Carolina Stories.” And if any of your children or grandchildren bring home less than stellar report cards or take classes that are a bit out of the mainstream while at Carolina, remember my story. Things have a way of working out.