“What I’ve come to learn about this place – more than anything – is that your Carolina Experience never ends.” 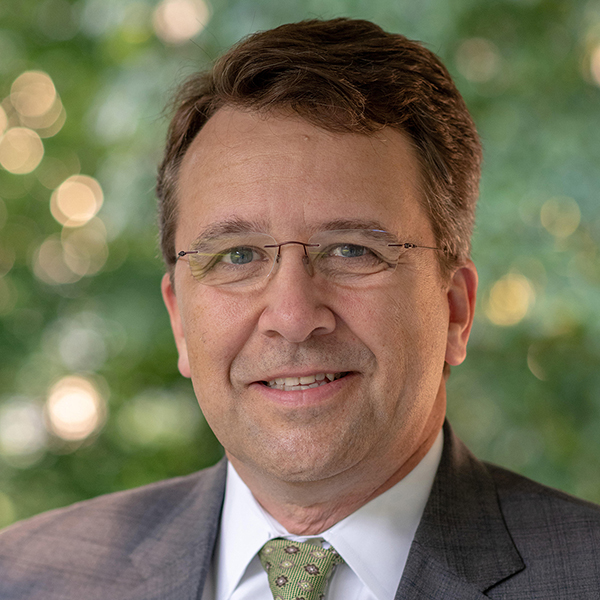 I was born – a Razorback … That may be heresy in these parts, but I hope you won’t hold it against me.

Anyone who grows up in Arkansas is a Razorback by default. I was born in what some here might call “the other” Fayetteville … I grew up in Little Rock, and my family is still scattered around the state. It’s a beautiful state, and I would recommend that all of you pay a visit sometime.

As you may suspect, Arkansas is not a major pipeline to Chapel Hill – I was the only freshman from Arkansas in the fall of 1983, and I know of only two other undergraduates who enrolled during my time here.

How I found my way to Chapel Hill was, at least in part, a function of my age. While I attended high school in the early ’80s, the cottage industry of college rankings and publications emerged – giving a lot of ideas to a kid from Little Rock with a case of wanderlust.

As a high school newspaper editor and an aspiring journalist, I was looking for a university with a great journalism school and a first-rate student newspaper where I could grow my abilities. When I found Carolina and everything else that it offered, I was hooked – even though I had never seen the place before.

You see, I was admitted off the waiting list and didn’t gain final admission until June. I never saw the campus until I arrived to move in. By today’s standards, that decision-making process sounds pretty cockeyed. That’s because, in hindsight, it was a little cockeyed. But it worked.

Move-in day as a freshman didn’t exactly unfold the way that the admissions staff would have drawn it up. Chapel Hill hit 105 degrees that day. Three of the four elevator banks in Ehringhaus broke down. And, of course, our fifth-floor suite did not come with air conditioning.

With almost a week before classes started, I went searching for The Daily Tar Heel office. The paper had a huge back-to-school issue to fill, so it needed a lot of copy. I met Lisa Pullen, the University desk editor with the sweet smile and the lethal red editor’s pencil. She didn’t know a thing about me, but she gave me a chance. I wrote a couple of stories for that back-to-school issue before ever setting foot in a classroom.

I was in Blue Heaven.

Once classes started, I did attend them – most of the time. My studies split largely between the J-School and the social sciences, and in both places I found some of the best teachers on the planet.

There was always the tempting call of too much fun to be had. I was a regular at basketball and football games, and I accepted more than my share of offers to go to a concert or hang out with friends on Franklin Street. And one of the few times I played golf included one of the greatest shots of my life. While playing Finley with a big group of friends, I drained a 40-foot putt for birdie. What made that so unusual was that the ball hit the bottom of the cup at 2 o’clock – in the morning. I couldn’t see a thing.

But the bulk of my time outside of my studies came in the form of a second education in the offices of The Daily Tar Heel, especially the year that I served as its editor-in-chief.

The DTH was a decrepit classroom – crammed full of third-hand office furniture, leftover pizza boxes, a couple of beat-up boom boxes. It was also packed with a fabulous group of dedicated student journalists – all of us trying to figure out how to get schoolwork done in as little time as possible because the paper demanded so much of them. I have no doubt that’s still very much the case today.

There are a number of stories from those days that stand out in my mind. Divesting the University’s portfolio from companies that did business in South Africa was big in those days, including South Building sit-ins and a shantytown on Polk Place. Student politics was as lively as ever, and the Helms-Hunt race and Iran-Contra generated a steady flow of letters to the editor.

Most of those stories take a back seat in my mind to the institution and the people who gave so much to make it work.

One of the most alluring things about working for The DTH involved the rituals of the newsroom.

There is no better learning lab anywhere on campus. At The Daily Tar Heel, you learn about deadline pressure, accountability, the power of persuasion, teamwork and leadership – all of it before you take on the responsibilities of a career, a family or a mortgage. I’m convinced it’s a big reason why so many former DTH staffers have gone on to successful careers in many fields of endeavor.

So, when I think about The DTH, I think first and foremost about the people. Keep in mind that The DTH does not attract your mainstream Carolina student – even by the standards of the typical college student, you have to be a little twisted to put up with the demands of the paper and the mix of personalities. Just ask any University administrator who has to deal with them.

There was our sports editor, Scott Fowler – a diligent, low-key personality and all-around nice guy who just cranked out one great piece after another. He’s now a columnist for The Charlotte Observer.

There was our resident provocateur, Jim Surowiecki – one of the smartest people I met at Carolina who was always good for an op-ed column that could keep the letters to the editor space filled for a couple of weeks. He’s now the financial page columnist for The New Yorker.

Much of our staff got their fill of journalism at The DTH and focused their talents elsewhere. Among the editors on my team was Sallie Krawcheck, a former CFO at Citigroup before joining Bank of America, where she’s now a contender to become its next CEO. I like to think of myself as her first boss.

Some of us – including me – continued in journalism for a few years before changing careers.

And there are a select few who continue to lead the charge for journalism in the face of daunting economic pressures. Sadly, the numbers of print journalists has shrunk in part because of the state of the industry.

Even as we hear about the painfully slow demise of the newspaper industry, The Daily Tar Heel and the J-School continue to draw some of the best young journalists in the country.

Thanks to the dedication of those students, The Daily Tar Heel is better than ever. Under the leadership of our own Andrew Dunn, The DTH has embraced web technology in ways that enhance communication and information for students. I’ll give a plug for Andrew here and encourage you to pick up a copy while you’re here or visit The DTH website to check it out for yourselves. Their work is very impressive.

I want to close with a few thoughts about what Doug calls our Carolina Experience.

Since graduation, I’ve moved around quite a bit – Washington, D.C., a year in England, five years in Houston, graduate school in Austin, and for the past eight years, my wife, our two boys and I have lived in Atlanta. Through all of those moves, I’ve enjoyed a number of fringe benefits, courtesy of my association with Carolina.

First, your affiliation with Carolina is a terrific calling card whenever you move to a new town. People know Chapel Hill is a special place, they know other Tar Heels, and they generally like ‘em.

There’s another benefit that’s more enduring. This one occurs to me in part because I spent seven years writing about higher education issues, so I’ve visited a lot of campuses and talked to a lot of people about their colleges and universities.

I can’t think of another major university in which people show more pride in the institution. I’m not talking about athletics – every school’s teams have avid supporters who want their guys or gals to win. I’m talking about the University, the campus, its leadership, the faculty, and the students – the people who create the Carolina Experience.

You can call me a romantic about this stuff – Lord knows, my wife does. And she’s usually right.

For some time, I thought my years on campus marked a period of transition at UNC.

Of course, when any of us look back on our time here, it’s hard to see it as anything other than the golden era of the University. If you take the wider view — as we’ve been able to do through our involvement on this board — it’s clear that this University is changing all the time.  Even as it celebrates its traditions, this is such a dynamic place, and one that we all cherish for being a part of it.

What I’ve come to learn about this place — more than anything — is that your Carolina Experience never ends. And that, my friends, is a glorious thing.