“What is most compelling about this place is … the idea that Carolina represents.” 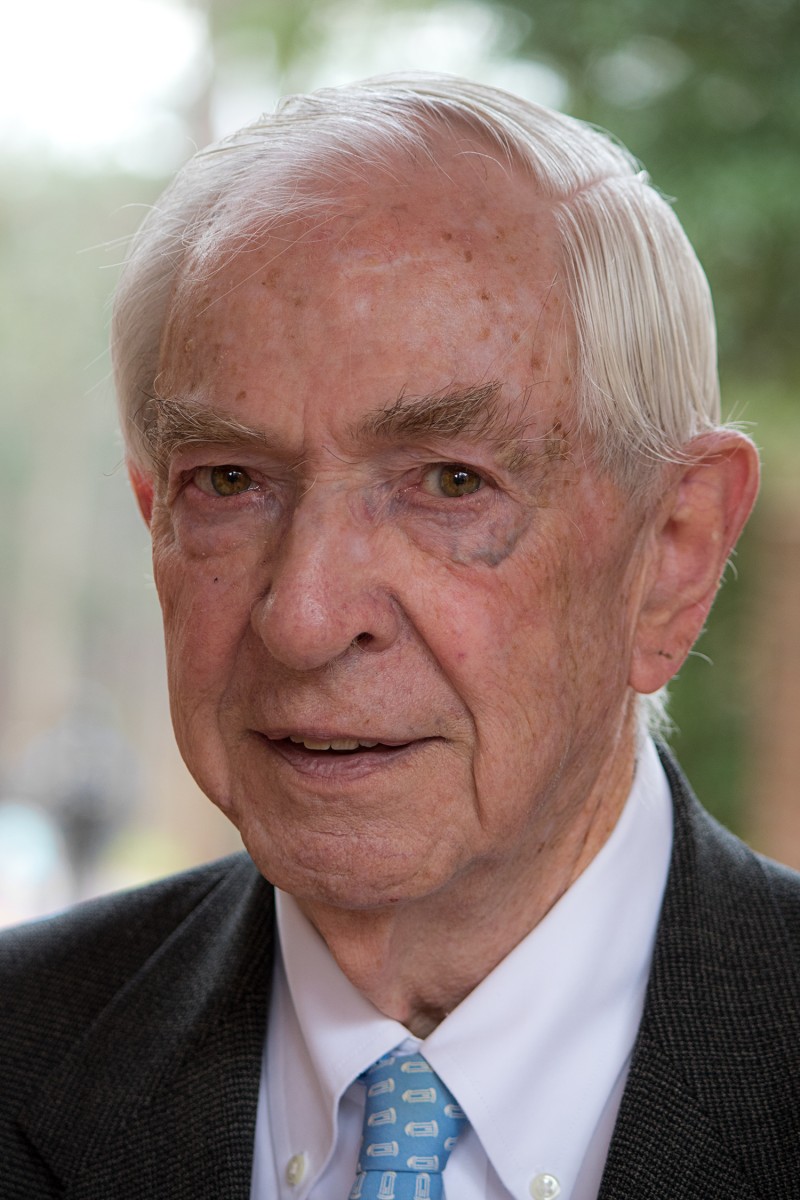 My Carolina story — as I know is true of others in this room — began even before I was born. My father came to Carolina in 1922. He was not the first in his family to go to college, but he was the first graduate of his rural Guilford County high school to go to the University. Here he encountered a bantam-weight ex-Marine history professor named Frank Graham (class of 1909) who would influence the rest of his life and mine.

I graduated from high school in early May in 1953. Several weeks later, I was a freshman at Carolina. I had two reasons for entering in summer school. One was a high school classmate who wanted to finish college in three years. He did not want to go off to college alone. And it seemed to me that it would be a good idea for me — like him, the graduate of a relatively small high school — to enter in the summer when the numbers and the challenge might not be as great.

I found that the numbers were smaller but the challenge perhaps more than I expected. Many of the students in my classes were graduate students, and others were teachers taking advantage of their summer break to upgrade their credentials. Almost everyone around me seemed older and wiser. One of the wiser ones was my first contact with the Fayetteville Mafia — Norwood Bryan ’56 — two days younger than I but already a rising sophomore. He had a red MG. There were few MGs of any color in Statesville. Indeed, there were none at all. Norwood became my good friend and introduced me to folks like Joel Fleishman ’55 (’59 JD, ’60 MA) and Terry Sanford ’39 (’46 LLBJD). Perhaps my future was decided at that moment.

I discovered in that class that my University faculties were different from my high school teachers. The class in which Norwood and I met was taught by a distinguished professor who on the first day told us of his anger that the title “doctor,” which academicians such as he had won through scholarship that could be traced back centuries, was also awarded to medical people who only a few years before had essentially been butchers and sorcerers. My Georgia mother came from a family that included several legendary physicians. I had never heard the profession so described. Most of my Carolina classroom experiences were not so jolting. Most were good — even great — and my life was enriched by teachers like Frederic Gill, Bill Poteat, Lyle Sitterson ’31 (’32 MA, ’37 PhD), Jessie Rehder ’40 and Alex Heard ’38. Fifty years after leaving Alex’s classroom, I would learn that we were cousins.

To be here in that environment and in the time of the advent of desegregation and the rise of the civil rights movement and to watch my native state — and my University — come to confront extraordinary social change was a compelling life experience.

If there was not much deliberation in whether to come to Carolina, there was even less in what would be my major or what would be my career after college. I had been editor of my high school newspaper and had enjoyed that, so I thought I might want to be a journalist, but I loved history and did well in it, so that became my major. It was, incidentally, the closest I ever came to career planning. The Good Lord and my friends looked after me from then on.

For a couple of years, I worked on The Daily Tar Heel. I was not very much a part of The DTH crowd — some of whom were in the office almost all their Carolina career — but I was the beneficiary of working at times with Rolfe Neill ’54 and Ed Yoder ’56 and Charles Kuralt ’55 and others who went on to distinction in their profession. The association with Kuralt led to a later life friendship that I will always treasure.

I had earned my monogram in high school in track and had won the senior class track award, and my father had been a successful runner at Carolina, and his old teammate Dale Ranson ’24 was the track coach when I came to campus. Coach Ranson was more excited about the arrival of Jim Beatty ’57, but he was encouraging to me. I, however, was not as committed as I should have been and in the end let extracurricular of other kinds and some attention to academics take me away from track. I can honestly say that it was the one life decision that I truly regret. Happily, I had two sons who turned out to be much better athletes and whose success I could enjoy, and I have a granddaughter who may become the first female quarterback in Carolina history.

My memories of people who have helped enrich my Carolina story do not end with graduation nor with this meeting today. I only regret that I cannot name them all. They are at every turn in my life among them: Doug Dibbert ’70, whom I first knew as an emerging student leader who is now my unofficial caregiver, and then there is the one Tar Heel who is certifiably even more heavenly blue than I — Ray Farris ’62 (’67 JD) — who came to share an apartment with me in his first summer after graduation and has been an important part of my life ever since. Most important of all, of course, has been my Carolina spouse.

I am indebted to all of them for including me in their life stories and sharing mine with me.

Along the way, I learned that other people have loyalties to other institutions and may even be said to love those places. Yet there does seem something special in the continuum of Carolina stories and Carolina families. Those stories are sometimes humorous, sometimes uplifting … and sometimes they are bittersweet.

My son, Tommy, was a Tar Heel through and through, though he never attended Carolina — unless you count Dean Smith’s basketball camp. He went to Lees McRae because he knew that there he could be a member of the varsity basketball team. It is game he loved as much as any person I have ever known. As a college senior, his team played the Carolina freshmen, and Tommy took one shot from beyond the three-point line and sunk it beautifully. Tommy died suddenly seven years ago, and at the memorial service his brother reminded all of us how proud Tommy was that he was 100 percent from the three-point line in the Smith Center. I never enter that arena that I do not look at that spot on the court. That is a part of my Carolina story as well.

How do I sum it up? Well, some of you have heard me tell of bringing my grandson to his first Kenan Stadium game. Afterward, we walked across campus in a perfect autumn dusk. Tuscan stopped me, looked up at me and asked, “Poppa, is this a special place?”

Well, the strength of our individual Carolina stories is that they are a part of the greater story of a very special place, and yet the true strength here is not the Hill, not the Well, not the buildings nor the trees nor even the memories.

What is most compelling about this place and its story and the stories that all of us carry with us is the extraordinary idea that Carolina represents. The idea born in the early hours of a new nation. The idea that a state could create a place of learning that would be both excellent and accessible. It is that idea and the lives of those who have served it — some in ways none of us will ever know — it is that idea that is our strength.

If those who do not love this place or who would seek to weaken it were to somehow prevail and close it down, if even the poplar were leveled and ground into sawdust, the idea would still be here, and we would build it once again. You can never kill the idea. You can never erase all the stories gathered around it.

The richest part of my life story is the opportunity to be a part of those stories.