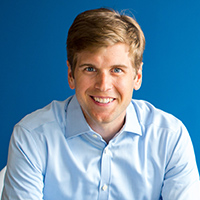 I’m here today to share my Carolina story, and I gotta say, Jill, thank you for inviting me to do it. It has been very fun this week to just reflect on some of the memories and also think about some of the seeds that Carolina planted in me that are blossoming or may blossom in the future.

My Carolina story begins at Morehead Scholars weekend, which was held during a very nice weekend where the citizens of Orange County were conducting, I think, what was the largest anti-Iraq War march down Franklin Street to the Weaver Street Market in Carrboro. I just thought, “Oh, my God, this is what everybody outside of Chapel Hill always said about this place!”

The protests aside, the sunny setting of Chapel Hill and the warmth of the people of Carolina made a big impression on me. I felt welcome and at home. Not to speak ill of another school, but I looked at another school right down the road, and just comparing it to Carolina, I thought, “You know, Carolina is a place where it is better to be than to seem.” I also did not mind the 61-to-39 girl-to-boy ratio that was then prevailing among undergraduates.

I arrived in August 2003 and was excited to start the conventional four-year college experience. I was assigned a room in Ehringhaus, 25 minutes away from anything, which was a character-building assignment because it was 90 degrees, it felt like, every day. My first weekend I desperately called home and begged, “Bring any air conditioners we have!” I ended up with five different fans that my roommate and I placed around the room.

The heat was good in that it gave me an incentive to get out of my dorm room and meet other people. That first semester, I pledged Chi Psi, which was a wonderful community of guys, many of whom are still some of my best friends today.

Academically, I shied away from political science after I got an “F” on my first assignment. I was in the late Professor Joel Schwartz’s class. I thought I’d turned in a well-written, 10-page paper on the Medicare Act of 1964, and after a conference in his office, he made it very clear that I did not understand the Medicare Act. So I decided I could be right or I could get the joke. So I rewrote the paper and lauded the Lyndon B. Johnson vision in courage and it turned into an “A.”

I had some other great experiences. During the summer of 2004, I had a transformative Morehead Public Service summer where I worked at a much-lauded youth-training center in D.C. that turned out, kind of beneath the surface, to be woefully ineffective. I would say it didn’t diminish my ideals, but it really raised my appreciation in the importance of effective leadership and strong execution when trying to confront problems in the public domain.

My sophomore year was particularly fun year for everybody at Carolina. It was 2005 — an epic basketball season — Raymond Felton, Reyshawn [Terry], Rashad [McCants] and Sean May won the national championship in St. Louis. I got to be there. That was pretty hard to beat!

In other ways, though, my Carolina experience was not entirely conventional, though, because I didn’t pick political science. I picked economics, which had the advantage of being a little bit more laissez-faire on class attendance, which freed me up to skip class and get a little more engaged in things off campus.

My sophomore year, I launched a media business that was a lot of fun, but it sort of gently failed. It got me addicted, though, to the game of entrepreneurship. So a few weeks after closing it, I launched my next venture.

I did some things in politics. Patrick Ballantine’s [’87] on the phone — I got to work on his campaign, as well as to help Fred Smith, who was the Republican nominee for governor after Patrick ran. I got to ghost-author Fred Smith’s biography.

During that time, I started keeping an office off campus, which, looking back, is a little bit of a not entirely normal activity, and I was spending more and more time in the world of business and public service.

My junior year, Carolina had a new business plan competition called the “Carolina Challenge.” Joel Sutherland [’07] and I pitched a software company concept. Our idea won the “Carolina Challenge,” and that got us excited about launching the business into a company, New Media Campaigns. Six months later, we had an offer to sell it to a Boston-backed company for a stock deal that represented 8% of their company. Joe and I thought long and hard about it and ended up deciding to stay the course. And the good news is that the business is still operating today. Joe runs it in Carrboro. The bad news is that the Boston-backed company was called HubSpot, and this morning I checked on it, and it was worth $17.5 billion. So maybe I should have gotten to more of the economics classes after all.

So during my time, these two threads — the normal college life and the more entrepreneurial life on campus — intertwined in numerous ways, sometimes conflicting, sometimes productive, almost always interesting.

As I reflected back on that this last week, I thought, “What seeds did Carolina plant in me for service?” The first seed was the importance of service. At the beginning of my journey, I was thinking about comparing Carolina and other schools and thinking what would be the best school for me. While I was at Carolina, I had these wonderful interactions with John Sanders [’50 (’54 JD)], who would take me to dinner a couple of times each month, and Richard Stevens [’70 (’74 MPA, ’74 JD)], who really saw the University as a beacon for the state, and certainly Chuck Lovelace [’77 (’79 MBA)], whose interest in students and building Carolina far exceeded the expectations of his job. I think that the ethos of those men and their commitment to the institution planted a seed that was: Your contribution matters a lot more than any benefit you get. I thought [School of Social Work] Dean [Gary] Bowen [’76 (MSW)] captured this well as he talked about the Blueprint for Next pillar “Of the public, for the public.”

The second seed was a desire to weave together different domains. I think that was shaped by the intersection of my coursework at Carolina, and I was able to connect that to life beyond the campus, and back and forth.

The third seed was a love of learning and applying learning. Doing a bunch of activities off of campus allowed me to ask the question, “What can I take from this class and apply it?” It also created a love of learning that is still valuable today, as I think about how can I use the body of knowledge other people have created to improve this thing I’m doing in practice.

Then the final seed was confidence. The affirmation of the different professors and staff who mentored me gave me a sense of confidence that allowed me to say, “Hey, I’ll skip normal working and go straight to business school.” And then when I graduated from business school to say, “Even though I’ve never had a real job, I’ll start Three Ships,” which has been quite a journey that I’m very happy I embarked on 11 years later.

In closing I will say, thank you, Jill, and thank you, Doug, for inviting me to reflect on the journey. Looking back, today I’m even more grateful for the way that institution has shaped me, and I’m sure each of us, in important and  significant ways. I’m also grateful that I ended up finding a Carolina girl to marry. We now have three young boys, who we hope will one day be Carolina students, and one more on the way.