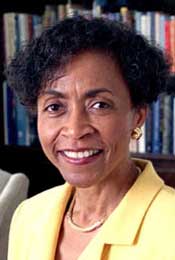 Bernadette Gray-Little, UNC’s executive vice chancellor and provost for the past three years, has accepted the chancellorship of the University of Kansas, effective Aug. 15.

Gray-Little, a native of Washington, N.C., joined the UNC faculty in 1971 and rose to chair and director of undergraduate studies for the psychology department and later director of the clinical psychology graduate program and senior associate dean for undergraduate education in the College of Arts and Sciences. She was executive associate provost for two and a half years before becoming dean of the college in 2004.

Bruce W. Carney, Samuel Baron Distinguished Professor of physics and astronomy at UNC, will serve as interim provost. A national search will be conducted for a new provost, Thorp said. Carney has been interim dean of the College of Arts and Sciences since July 2008.

Dr. Shelton Earp ’70 (MD, ’72 MS) has been named to lead a 17-member committee that will conduct a national search for Gary-Little’s successor. UNC also has engaged R. William Funk and Associates, a Dallas-based firm specializing in searches at the senior leadership level for major colleges and universities, especially those that, like Carolina, are members of the Association of American Universities.

Earp, who has served on previous chancellor, provost and dean searches, is a professor of medicine and pharmacology at UNC, where he is Lineberger Professor of cancer research and director of UNC’s Lineberger Comprehensive Cancer Center.

Thorp said the search committee was working toward his goal to name a new chief academic officer by next spring. The committee is expected to recommend a final slate of candidates to Thorp, who would forward a recommendation to the Board of Trustees for approval.

Gray-Little’s appointment was announced May 29 by the Kansas Board of Regents. She will become the 17th chancellor at Kansas, succeeding Robert Hemenway, who is retiring after holding the office since 1995.

“She rose to the top of an exceptionally talented and competitive pool of applicants,” said Regents Chair Donna Shank. “Dr. Gray-Little’s outstanding record of academic excellence and impressive administrative leadership throughout her notable career, along with her inspiring enthusiasm and character, make it clear that she is ideally suited to propel KU to even loftier heights.”

When Robert Shelton announced he was leaving the provost’s office in February 2006, Gray-Little was chosen to succeed him just 12 days later. Then-Chancellor James Moeser said he had never seen such unanimity among trustees, vice chancellors, deans and faculty over her selection. “It became clear that one person stood above all others,” Moeser said at the time.

On a campus that places a high value on deliberative procedure and on faculty involvement in searches, Moeser had expected to launch a national search for a new provost, the University’s chief academic officer. But as he began floating names, Bill Roper, dean of the medical school and CEO of UNC Health Care, said that Carolina could search nationally but that six to nine months later Gray-Little would be provost.

One memorable moment in her Carolina career came in 2005, when she spoke at the dedication of the Unsung Founders Memorial, the monument in McCorkle Place to slaves and free persons who had helped build the University.

She said that she knew little of her ancestors, some of whom were enslaved on South Carolina plantations, because anonymity was forced on them. She spoke eloquently about “the irony of this moment,” that long before persons of color were allowed to study or teach at this University, they contributed their labor and service to the campus.

The monument, she said, “will help to make us and everyone who comes after us, aware and thankful to those who did some of the heaviest lifting, offered the bravest kind of service, and contributed some of the finest physical details to our University.”

Gray-Little received her bachelor’s degree from Marywood College in Scranton, Pa., and her master’s and doctorate in psychology from St. Louis University. Her postdoctoral research in cross-cultural psychology was funded by a fellowship from the Fulbright Foundation for study in Denmark. She also has been a Social Science Research Council Fellow and a recipient of a Ford Foundation Senior Scholar Fellowship through the National Research Council.

In her work in the College of Arts and Sciences, she helped overhaul the undergraduate advising system and oversaw the Office of Undergraduate Research, the Honors Program, the James M. Johnston Center for Undergraduate Excellence, a curriculum review and the beginning of the First-Year Seminar Program.

She was one of four recipients on May 9 of the GAA’s 2009 Distinguished Service Medal. The award is given for service and commitment to the University and the alumni association.

Assisting Earp on the committee will be Lissa Broome, Wachovia Professor of banking law, who will serve as vice chair. Joining them are faculty members:

Also serving on the committee are: