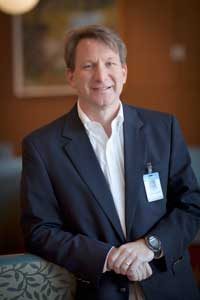 Dr. Norman “Ned” Sharpless ’88 will become only the third director of the Lineberger Comprehensive Cancer Center in January.

Sharpless, who studied math as an undergraduate and received his degree in medicine from UNC in 1993, will succeed Dr. H. Shelton “Shelley” Earp ’70 (MD, ’72 MS). Earp will continue as director of UNC Cancer Care, a role in which he coordinates cancer care and research across UNC’s School of Medicine, the University and UNC Health Care System.

“Ned is a star in the world of oncology,” said Dr. Marschall Runge, executive dean of the School of Medicine. “He is a unique individual who has made major contributions to understanding the fundamental aspects of cancer biology. He is not only a renowned physician and researcher but a great leader, as well.”

Sharpless, an honors graduate who was a Morehead Scholar at Carolina, currently is the Wellcome Distinguished Professor of Cancer Research, professor of medicine and genetics and the Lineberger Center’s deputy director. He is a practicing medical oncologist and was trained at the Dana-Farber Cancer Institute and Massachusetts General Hospital. He leads a well-funded 20-person cancer research laboratory, and his program uses genetically engineered mouse models to study cancer and aging. His more than 100 fundamental and translational scientific articles have been published in the world’s most prominent medical journals.

Sharpless also is an inventor; his 12 patents form the core intellectual property for two Research Triangle start-up companies he co-founded. He established and co-leads two major UNC Lineberger initiatives — one that tests innovative therapies in preclinical models of cancer and another that coordinates a large faculty team using massively parallel sequencing technology for the benefit of individual patients with cancer.

“Ned is a creative force with an encyclopedic knowledge of clinical oncology and a remarkable grasp of the core sciences, cancer biology and genomics,” Earp said. “His stature as a nationally recognized clinician scientist, his energy and his North Carolina roots make him the perfect choice as the next leader of North Carolina’s public comprehensive cancer center.”