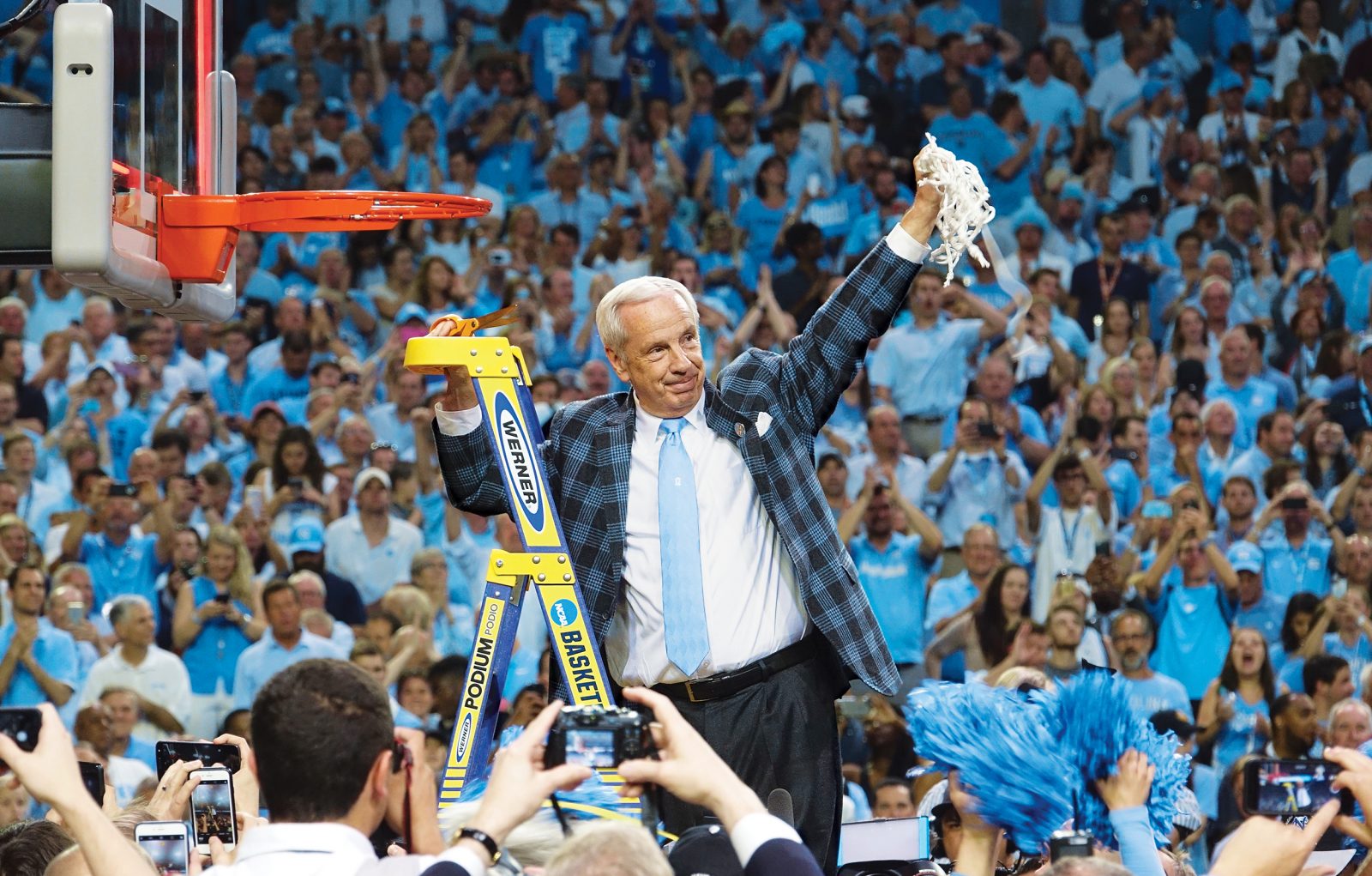 Coach Roy Williams ’72 cut the net after the Tar Heels defeated Gonzaga for the NCAA championship in 2017. (Photo by Jason Kilar ’93)

He always said he’d go on coaching Carolina as long as his health allowed, but deep down, Roy Williams said Thursday, he knew the end would come when he no longer thought he was the right person for the job.

Williams ’72 (’73 MAT), who led Carolina to three NCAA championships, said he thinks that day has arrived, and he is retiring after 33 seasons and 903 wins as a college basketball head coach.

“It’s been a thrill. Been unbelievable,” he said through tears on Roy Williams Court in the Smith Center. “It’s coaching, and that’s all I ever wanted to do since the summer after my ninth-grade year in school.”

But after his first-ever sub-.500 team lost six games that were decided on last-second shots in a 2019-20 season haunted by injuries, “it sort of ate at me all summer.” In the pandemic-wracked season just concluded with a first-round loss in the NCAA Tournament, he said: “I just never got the team where I wanted it to go this year. We got better all season long but not to the level some teams have been. I didn’t push the right buttons.

“I no longer feel that I am the right man for the job.”

Williams just concluded his 18th season as the head coach at his alma mater. In addition to NCAA titles in 2005, 2009 and 2017, he led the Tar Heels to a 485-163 record, two other Final Fours, nine ACC regular-season championships and three ACC Tournament crowns. He was inducted into the James Naismith Hall of Fame in 2007.

UNC Athletics Director Bubba Cunningham said later Thursday at an evening news conference that he would not set up a formal search committee to find a new coach and that he and Chancellor Kevin Guskiewicz would vet candidates and make a recommendation to the Board of Trustees. Cunningham said that he and Guskiewicz would seek advice from a broad range of people with deep knowledge of college basketball and that they intend to fill the position quickly.

Loyalty as a hallmark

In the early 1970s, with his playing days over after his freshman year, Williams pleaded to sit in the grandstand during practices and, toward his own dream of being a coach, take notes from the master class Dean Smith was teaching. He went back home and made it happen — coaching high school basketball and golf near where he grew up in Asheville. His basketball record was under .500.

But Smith called him back in 1978 as a part-time assistant coach paid $2,700 a year. Williams drove around the state delivering film of Smith’s weekly show to TV stations to make ends meet.

As he moved closer to the head coach’s seat on the Carolina bench, the Heels were winning big, and Williams was there when they beat Georgetown for the national title in 1982.

“I could never match what Coach Smith did, but every day I tried as hard as I could,” Williams said.

There is little drama as he retires at age 70 after 48 seasons as a coach, third all-time in wins by a Division I head coach — at least, not by the standard set when he pried himself away from glory years at the University of Kansas in 2003.

Loyalty, Williams’ son Scott ’99 once said, “is a two-headed beast in this case. One’s a Jayhawk, and one’s a ram’s head.”

When Williams got Smith’s blessing to succeed Bill Guthridge in 2000, he pondered and then stuck with Kansas, where he was an adored and proven winner. Loyalty to his players won out; a media report said, “The announcement probably means Williams, who will turn 50 on Aug. 1, is out of Carolina’s picture for good.”

Remember that in 1991, Williams had said: “The guy that takes Coach Smith’s place really has to be a little bit of an idiot.”

He never seemed to mind the name-calling, judging from the frequency with which he applied words like that to himself when things weren’t going well.

When the three-year term of Matt Doherty ’84 ended in frustration for the Carolina program, Williams was through second-guessing himself. Another week to think it over — his family tugging him to the east, and this time the answer was yes.

“Here was a guy that went away to do his own thing,” Williams explained. “The family said, ‘Why don’t you come back and be a part of the family business?’ And the guy said, ‘No, I’ve got this going, and I’m really pleased. I’m really happy here. This is what I want to do.’

“And then three years later, the family business was in more trouble, and they said, ‘Why don’t you come on back? We need you back here.’ ”

He had turned down several jobs to stay at Kansas. And he’d had it made there.

Williams said on Thursday that the second time around, Smith told him, “We wanted you the first time, but we need you now.”

Back home, he said, “I want it to be The University of North Carolina’s basketball program that Frank McGuire and those guys before him built and that Coach Smith made the best.”

Williams is second in NCAA history in 30-win seasons, 12 of them. He has the sixth-highest winning percentage in NCAA history, .774. He coached 32 NBA first-round draft picks, 52 players who played in the NBA and four National Players of the Year. He was consensus National Coach of the Decade, 2000-09.

Williams said he was approaching the near future with trepidation because he’s never known anything except coaching. He said if he could find a way to be of service to the University, he would do it.

“He kissed midcourt after the win over Duke in the regular season finale this year, and maybe then we suspected,” Adam Lucas wrote for goheels.com. (Williams said he was not planning retirement when he planted that kiss.)

“But as sad and uncertain as it is for the rest of us, it is so happy for Roy and Wanda Williams [’72]. They lived and breathed and represented Carolina every single moment of the last 18 years. There wasn’t a second that he wasn’t thinking about what was best for the Tar Heels first. That’s going to be very, very difficult to replace. That would be the case in any University job, even more so in a head basketball coach.”

Michael Jordan ’86, for whom Williams was an assistant coach, said: “To choose your own path, to walk away from the game when he wants, it’s great he now gets to spend more time with his children and grandchildren.

“I’m sad that he’s leaving, because he has meant so much to basketball.”

Most recently, Roy and Wanda Williams made quite a move off the court: the largest of several gifts back to Carolina over the years, $3 million to support scholarships for athletes, Carolina Covenant Scholars and Chancellor’s Science Scholars. Athletics Director Bubba Cunningham said the Williamses gave gifts “annually.”

He received the GAA’s Distinguished Service Medal in 2010.

LeVelle Moton, N.C. Central head coach since 2009, tweeted: “When I was hired, the first person to reach out & offer support was Roy Williams. Over the years, we became great friends. Thank you for ur support, friendship, and making our game better. You will be missed. See u on the golf course my man.”

There was nothing “normal” about Williams’ past two seasons. The Tar Heels suffered their first-ever losing season under his leadership in 2019-20, and then, amid the daily frustrations of the COVID-19 pandemic protocols, they were 18-11 but lost in the first round of the NCAA Tournament.

“Basketball can be the greatest game in the world, and when you lose, it’s like somebody reaches in and grabs your heart and shakes it right in front of you, just taunts you a little bit,” Williams said after that loss on March 19. “But coaching basketball, that’s pretty daggum good.”