Like most students, Jeff Taylor ’87 was a basketball fiend during his Carolina days. Even now, like many fans in the States, he can wax poetic about the NCAA and the NBA, but after spending...

Dr. Ned Sharpless ’88 is on the move again. Chosen to head the National Cancer Institute in 2017, the former director of the Lineberger Comprehensive Cancer Center is set to become acting commissioner of the...

A Quick Q&A With: Donovan Livingston ’09 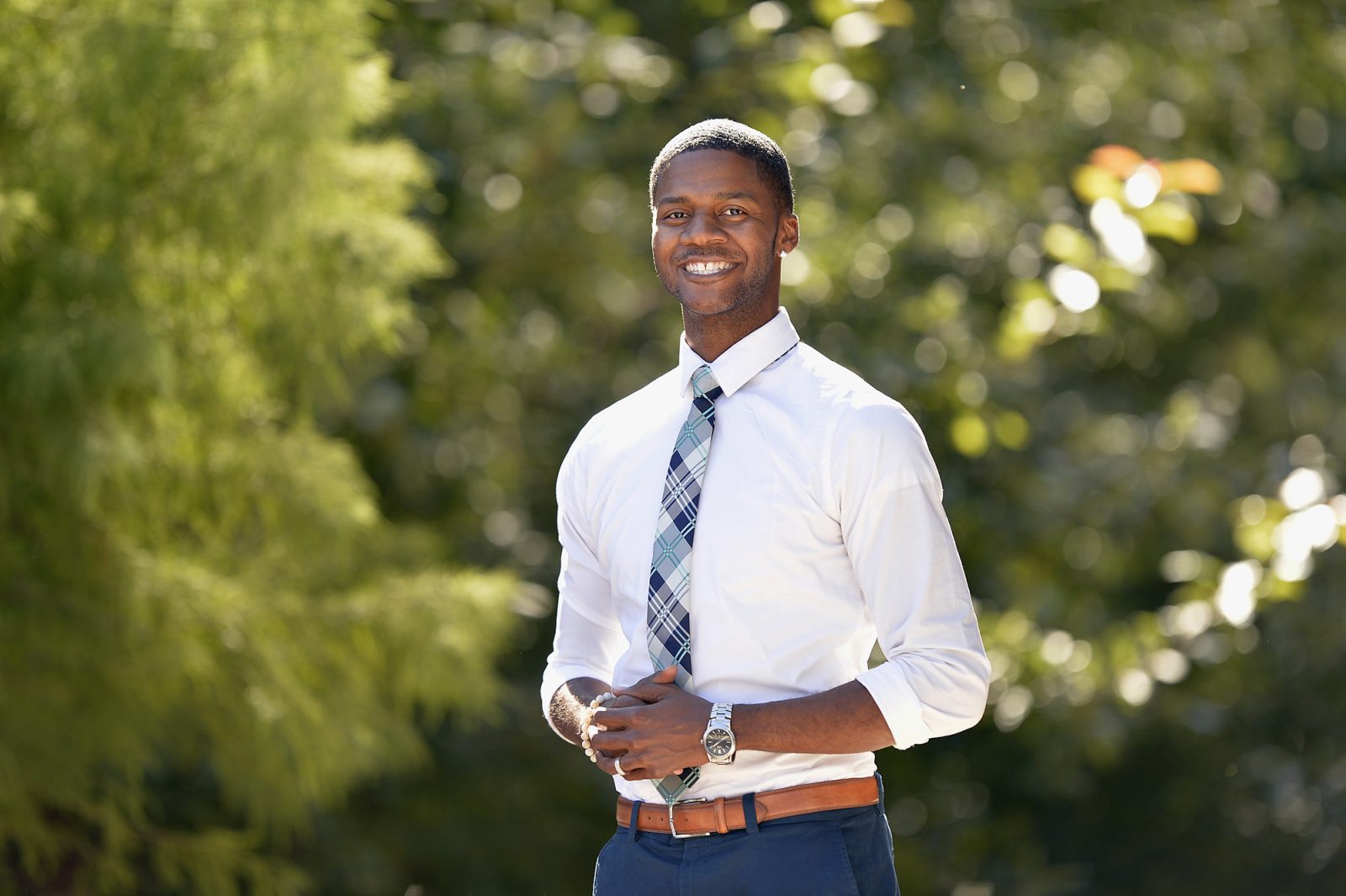 Donovan Livingston ’09 makes his case for lifting up youth through education in his poem, Lift Off, which he delivered at Harvard. (Photo by Grant Halverson ’93)

‘We must stop treating our experiences in school as if they happen in a vacuum.’

Donovan Livingston ’09 has returned to Carolina’s campus several times to speak and mentor students, but he says his Sept. 16 visit felt decidedly different. It struck him as soon as he walked into the Frank Porter Graham Student Union, where he delivered the keynote address at UNC’s first Bell Student Leadership Symposium, sponsored by UNC Student Affairs.

“It’s where I first performed spoken-word poetry here,” says Livingston, a history major who became a global sensation in May 2016 when a video of his poetic commencement remarks at Harvard’s Graduate School of Education went viral, shared more than 13 million times online.

Livingston says that poetry made him feel connected not just to the University but also to the Chapel Hill community. As a mentor to at-risk high school students of color, sharing his drive for equality in education, “it changed everything for me,” he said. “It allowed me to be my most authentic self.”

Listen to Donovan Livingston ’09 perform his poem Just Like Your Mama.

Livingston makes his case for lifting up youth through education in his poem, Lift Off, which he delivered at Harvard. His charismatic performance drew comparisons to the oratory of then-President Barack Obama, who later invited Livingston to introduce him during a rally in Fayetteville, where Livingston grew up in a two-educator household.

Newly enrolled in the doctoral program at UNC-Greensboro, Livingston took time following his Bell lecture to consider his platform to influence education.

What would be one thing you would change about education in America today?

“I would say being more intentional on how we connect curriculum to real-world challenges. We must stop treating our experiences in school as if they happen in a vacuum. We should see our classrooms as a place where students learn to be compassionate, empathetic, and engage in social justice.

“Teachers are so special, so valuable and important to what makes our society great. But they often are handcuffed by testing and other state or federal mandates that require them to check off bullet points that don’t necessarily prepare students for life beyond school. Institutions must be better at taking asset-based — not deficit-minded — approaches to teaching and learning.”

What piece of advice would you give students hoping to go into education, and how can we attract more top students to become teachers?

“I’ve had some of my best professional experiences in the classroom — and some of my worst. It reminds you that your struggles are someone else’s struggles, too.

“Education is a cornerstone of our democracy. Our job is not to impress upon students how to think but to show them the world as it exists today and the tools to navigate it in their most authentic way.

“It’s not glamorous. You get your hands dirty. You’re dealing with people and personalities in the moment. It can get messy, but that’s the beautiful thing. And in the process, you learn a lot about the value of relationships to others, as well as the self.”

You were a history major at UNC. With controversies swirling around Confederate monuments, how good of a grasp do you think Americans have on the country’s history? How should education address such issues?

“Education trains us in the art of asking why. For me, I’ve always been a huge museum nerd. It wasn’t until I was much older that I started asking: ‘Why do we preserve some things, some stories, and not others? What role does context play in preserving of historical moments?’ There’s a ton of information about the speech that preceded the unveiling of the [Silent Sam] monument, about horsewhipping the Negro. … Understanding context helps us make sense of our values and how history can be both affirming and dehumanizing.

“I think about erasure all the time, whose stories actually get told. I’m very sensitive about who is erased from our history, in reference to marginalized populations. The last thing I want to do is erase another group’s story, but I also want to spend time making monuments of those stories often excluded from the dominant narrative.”

“It’s amazing that one moment can introduce you to a global audience. I hear from people who want to be friends, who want to know how to get into grad school, how to better engage with students from diverse backgrounds. But I also get quasi-marriage proposals and things like that.

“My wife, Lauren, who is [an] M.D./Ph.D. candidate at Wake Forest University, helps me manage social media. When I initially shared Lift Off, she was like, ‘This is dope! It will garner a lot of attention.’ I hoped it would rate a little buzz on campus, but I didn’t expect it to touch all corners of the globe. She’s the one who believed it was bigger. She’s my rock.”

Did you choose UNC-Greensboro to be closer to your wife?

“It’s wonderful for both of us to be in the Triad now. UNC-G was the first program that accepted me, back in 2015. Harvard actually rejected me but later invited me to the master’s program at the Graduate School of Education. Thankfully, it manifested into this. Arguably, had I not gone to Harvard, we would not have this conversation.

“It drives the question of what really brought people to the Lift Off conversation in the first place. Was it because it was a speech that happened at Harvard, or was it the message that drew you in? Had it happened somewhere else, would all this even have been possible? I want to use the privilege that comes from this experience to make people realize they can achieve, too.”

How has the age of social media, 140-character tweets and short attention spans affected the ability of long-form prose and poetry to connect with an audience?

“I tweet almost daily, maybe every other day. It’ not the quantity of what you say but the quality. I tend to speak out on certain issues. DACA got me going, and Charlottesville. I don’t like running to Twitter as soon as an issue crosses my mind. I’m methodical that way on social media because there are people watching now. I want to take the time to consider, ‘Who am I alienating with this tweet? Who am I leaving out?’ I’m a little more purposeful these days. I want to make sure that the message I put out there makes you think.”

Watch Donovan Livingston deliver Lift Off at Harvard, or read the text.