Brooke Baldwin ’01, a CNN news anchor, will deliver the University’s Commencement address on May 14 in Kenan Stadium. 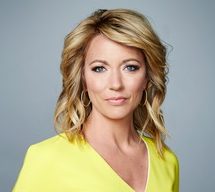 In addition to covering the election, Baldwin traveled to the Persian Gulf last spring for an embedded opportunity with the Navy. She also traveled to Kenya ahead of President Barack Obama’s historic visit and conducted an exclusive interview with Obama’s half-sister and their grandmother.

Her live anchoring includes Obama’s second inauguration, coverage of the Boston marathon bombings and the elementary school shootings in Newtown, Conn. She also covered the 2012 presidential election, anchoring from the Republican convention and participating in CNN’s coverage of the GOP primaries.

Baldwin’s experience covering breaking news includes the earthquake and tsunami in Japan and the death of Osama bin Laden. She also was part of a Peabody-Award winning team at CNN covering the oil spill disaster in the Gulf of Mexico. Baldwin worked with the network’s special investigations unit to complete a documentary titled “To Catch a Killer,” which won a Silver World Medal for Best Investigative Report at the New York Festivals International Television & Film Award in 2012.

Baldwin began her broadcasting career at WVIR in Charlottesville, Va., and was a lead reporter at WTTG in Washington before joining CNN.