When the Mega Millions lottery prize reached $810 million in July, Raising Cane’s Chicken Fingers owner Todd Graves bought 50,000 $2 tickets for the employees in his restaurant chain, which has 650 stores spanning 32 states. If any of the tickets hit the jackpot, he planned to divide the prize money among the 50,000 employees. That would have netted a payout of more than $16,000 for every fry cook and cashier working to make his business a success.

Unfortunately, none of the tickets held the winning number, but if one had, said divisional leader Dustin Shearer, “it would have been life-changing,” and well worth Graves’ $100,000 investment.

Raising Cane’s is bringing its innovative business style to Chapel Hill. In December 2021, Graves bought the former Spanky’s building, at the intersection of Franklin and Columbia streets, and expects to welcome customers in early 2023.

While Graves doesn’t shy away from chasing dreams, he didn’t rely only on luck. He earned his success. When he couldn’t get investors to believe in his idea of a restaurant that sold only chicken-finger meals — in different sizes and with crinkle-cut fries and coleslaw — he worked as a boilermaker in Los Angeles and a salmon fisher in Alaska until he had enough money to launch his chicken-finger concept on the edge of the Louisiana State University campus. The fast-casual eatery was a hit.

“We do one thing, and we do it better than anyone else,” Shearer said. No fancy sides or a la carte options. Graves offered franchise opportunities, often in edge-of-campus locales. A major franchisee has opened outlets in the Middle East, the brand’s only international branch thus far.

To help restaurants during the pandemic, Graves used $1 million of his own money to aid 10 struggling stores in hard-hit markets.

As the pandemic waned, Raising Cane’s aimed to hire 10,000 workers to staff 100 new restaurants to meet pent-up demand. Corporate executives tied on aprons and fanned out to the new establishments to work as fry cooks and cashiers until the hiring goal was met, which came two months later.

Raising Cane’s is among Glassdoor’s Top 100 Places to Work. Customers have been known to camp out in line before a grand opening, and the restaurant draws names from among the intrepid and awards the winners with free chicken all year. 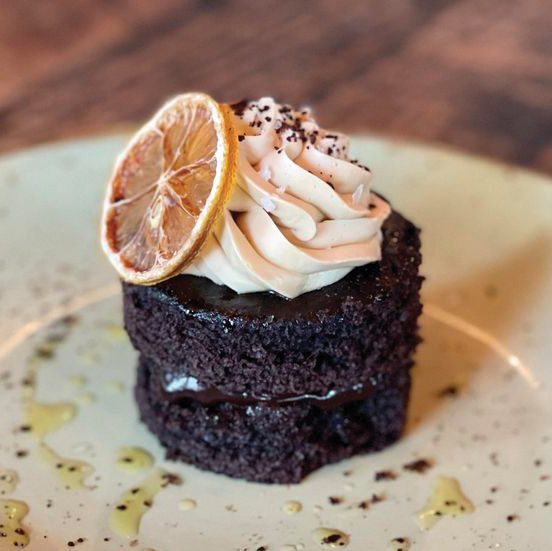 NoDa Brewing Co. Tapas owners Julie Paddison ’90 (’92 BSN) and Lewis Hendricks attribute their success to agility. The pair have birthed new concepts and reshaped old ones in the local restaurant and retail scene for more than five years. The craft beer and tapas shop, formerly Old East Tavern near the intersection of Fordham Boulevard and Raleigh Road, is their latest vision.

In 2017 Paddison and Hendricks opened Bottle Rev, a craft beer and wine bottle shop and tap room that grew to five locations around the Triangle before closing in 2020. The two regrouped and in 2021 opened Old East Tavern in the same 54 East complex in Chapel Hill where a Bottle Rev location had been.

That same year, they launched RTP Uncorked, which sold wine by the glass or takeaway bottles. Located in Research Triangle Park, the shop quickly became a destination for wine enthusiasts.

“We move fast,” Paddison said. “We’re constantly adapting. We triage problems and can pivot on a dime.”

In 2022, the two entrepreneurs refreshed their 54 East store by closing Old East Tavern in July and reopening the space in September as NoDa, strengthening their relationship with NoDa Brewing Co. in Charlotte, which dates to their Bottle Rev days.

The NoDa tapas bar pairs beverages with small plates of clams in cream sauce, spicy beef Cuban frita, bean tartine with chipotle ricotta and Cornish game hens with slaw. Save room for espresso cake. Everything is made in house from local ingredients.

After Tamara Lackey closed Coco Bean in the 54 East complex in 2021 to move the coffee shop to Glen Lennox, Julie Paddison ’90 (’92 BSN) and Lewis Hendricks recognized a new business opportunity. They already operated what was then Old East Tavern next door, and Paddison volunteered at an animal rescue nonprofit Lackey ran. Paddison and Hendricks negotiated to take over the space for a different coffee-shop concept.

In early 2022, they opened Poplar Café (“As in Davie poplar,” Paddison said), a coffee shop with small conference rooms. Leveraging the demand for remote work, not to mention students working on group projects and seeking idea-collision spaces, Poplar Café has closed-door gathering spaces in addition to its open-seating coffee shop.

For sustenance, the café offers hot and cold drinks and house-made baked goods, with plans to serve lunch in coming months. The coffee comes from Carrboro Coffee Roasters.

Notoriously drive-thru-unfriendly Chapel Hill now has its own Cook Out.

Cook Out founder Morris Reaves and his son Jeremy Reaves, the franchise’s CEO, bought the former Burger King on the corner of South Elliott Road and Fordham Boulevard in April for $2 million. After a makeover that included the installation of Carolina blue tables, the spot reopened in September as Cook Out, one of the franchise’s more than 250 outlets in 10 states.

The franchise has developed a passionate customer base. The menu features burgers and barbecue, hot dogs and corn dogs, chicken strips and cheese bites — and 40 flavors of milkshakes. Meals are ordered by “trays,” combos that can be, mathematically speaking, customized in 54,000 ways.

Because a drive-thru had been approved and in operation on the site for years, Cook Out did not have to seek approval from Chapel Hill’s town council. Cook Out’s business model calls for a drive-thru that stays open late. The Chapel Hill store will close at 3 a.m.

After more than a decade tucked in a nook in Carr Mill Mall, Carrboro Pizza Oven wiped down the counter one last time and turned out the lights for good. Jeff Mauldin owned the popular shop that did a brisk business selling traditional and innovative pizzas — Detroit-style and Grandma’s were fan favorites — made with locally sourced ingredients.

When the Mauldin family moved to Southern California earlier in the year and he was unable to find a buyer for the thriving shop, Mauldin tried managing it remotely. But running the day-to-day operation from nearly 2,700 miles away just was not feasible.

On Aug. 20, Mauldin posted a notice on the restaurant’s website that the pizza oven had run out of time, and he would close the store permanently at the end of the night. His lease ended Aug. 31, and he was not able to work out an arrangement with the landlord to move forward. For many local households, pizza night just won’t be the same.