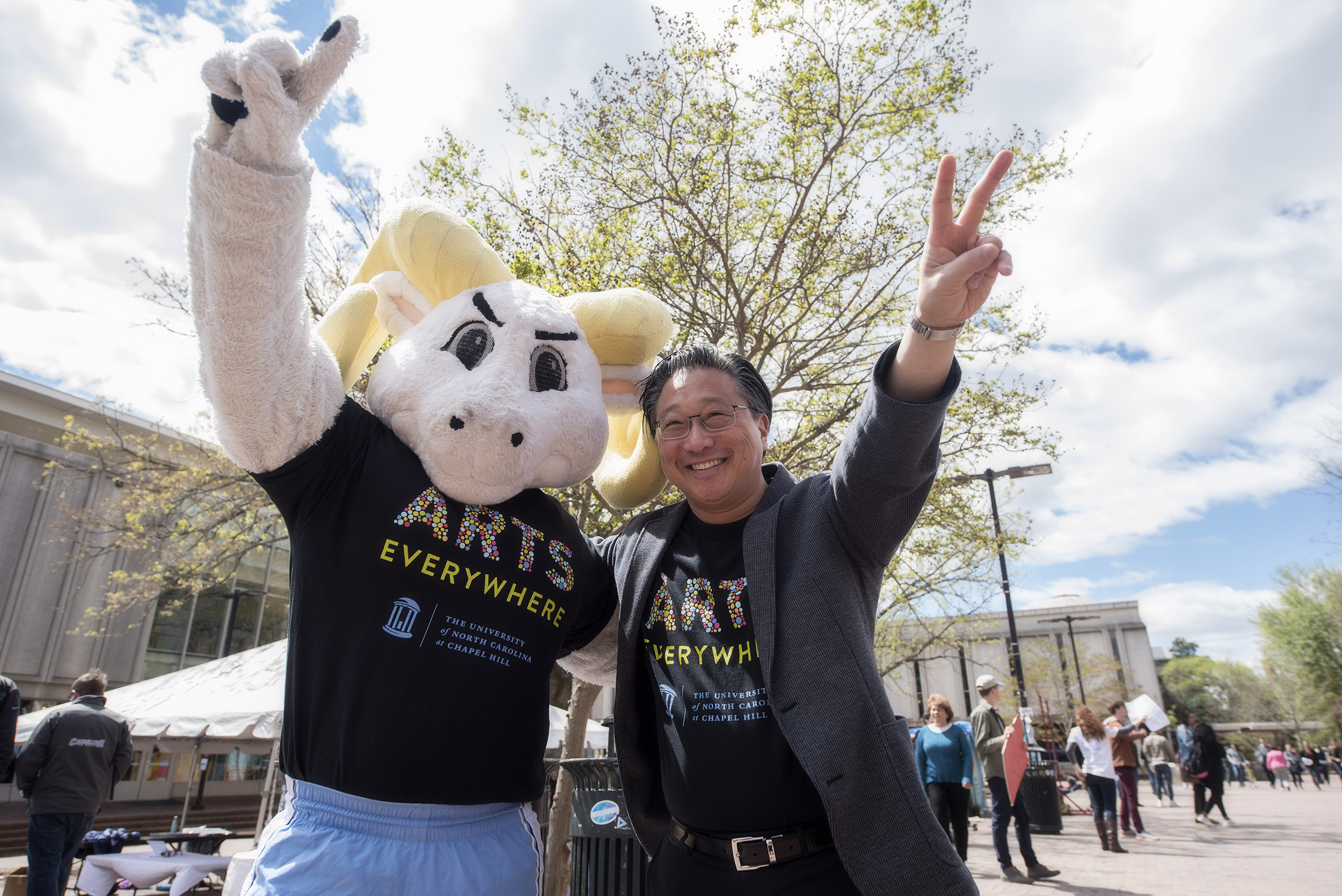 Charged with raising the profile of the performing arts on campus and developing a clear artistic identity for the University, Kang urged Carolina to think big. “You can’t have what you can’t think of,” he said. (UNC photo by Jon Gardiner ’98)

Emil Kang, special assistant to the chancellor for the arts and founder of Carolina Performing Arts, is leaving UNC after 14 years to lead arts grant-making for The Andrew W. Mellon Foundation.

Interim Chancellor Kevin Guskiewicz said that under Kang’s leadership, “Carolina has made immense progress in elevating the vital role the arts play in our campus and local communities.” He said Kang, who arrived in Chapel Hill in 2005, oversaw the commissioning of more than 50 new works by renowned artists, 40 of which premiered in Chapel Hill. In 2016, UNC began Arts Everywhere, a major initiative dedicated to integrating artistic practice, learning and engagement into the daily lives of the community. In 2018, Carolina Performing Arts opened CURRENT ArtSpace + Studio, an immersive performing arts venue and studio space in Carolina Square on West Franklin Street

In 2012, President Barack Obama nominated Kang to the National Council on the Arts, a first for a North Carolinian. He serves on the boards of the Martha Graham Dance Company and the International Society for the Performing Arts.

Kang will begin his role as program director for Mellon’s arts and cultural heritage on Oct. 1.

Former Chancellor James Moeser — who hired Kang at UNC — will be interim executive and artistic director of Carolina Performing Arts starting Sept. 1. Larry Wheeler, former director of the North Carolina Museum of Art, will be a part-time consultant to Arts Everywhere and the Ackland Art Museum. Interim Dean Terry Rhodes ’78 of the College of Arts & Sciences will chair a national search for Kang’s successor.

Charged with raising the profile of the performing arts on campus and developing a clear artistic identity for the University, Kang urged Carolina to think big. “You can’t have what you can’t think of,” he said. The notion of a first-rate program got a boost just as he was getting started with the conversion of Memorial Hall into a modern performing arts venue.

Kang came to Carolina after having been executive director of the Detroit Symphony Orchestra, where he led a campaign that raised $125 million and oversaw the opening of a major new performing arts center. He acknowledged that the orchestra accumulated a deficit of $2.2 million over his three years there. “I took some risks in programming to try to increase audiences,” he said at the time. “I’m not afraid of taking risks. They don’t always work out, but if you don’t try, you don’t get anywhere.”

Upon his arrival, he said, “Ultimately, my goal is to make Chapel Hill an immediately thought-of stop on artists’ tours.”