As more than 6,000 Tar Heels participated in Carolina’s graduation ceremony on Sunday, they were challenged to find not just their careers but their callings and to ask themselves what they are uniquely wired to...

Biodiversity Pioneer to Speak at Commencement 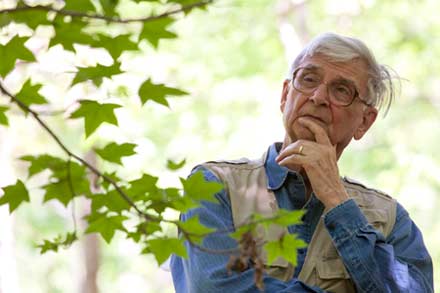 Chancellor Holden Thorp ’86 has called E.O. Wilson one of his heroes. When he was director of the Morehead Planetarium and Science Center in 2004, Thorp brought the famous biodiversity scholar to the George Watts Hill Alumni Center, and Wilson spoke to a packed house.

Now, Thorp has engaged Wilson as the 2011 Commencement speaker.

“Ed’s work in entomology and ecology made biodiversity an important topic,” Thorp said. “He has inspired countless young people to learn more about humans, other species and the fragile, complex relationship that links all of us with this planet.”

Thorp told The Daily Tar Heel, “He is an incredible advocate for the importance of biodiversity and protecting the planet and the species that inhabit it and the difficult times that we are facing. He’s the most articulate environmentalist of our time, so he’s a great choice. … I’m sure that many of the students who will be graduating will be going to green jobs, and so what better way to send them off than to have Ed Wilson as the speaker?”

In the tradition of Rachel Carson, founder of contemporary environmental movement, Wilson bridges the gap between science and the humanities, making science accessible to the general public and presenting the case for conservation of the natural world. Research he started as a child led him to be the pre-eminent authority on ants and their behavior, and from there the bigger picture of biodiversity opened up to him.

He used what he learned from ants to formulate theories that have become cornerstones of the study of conservation biology and sociobiology. The application of his knowledge of insect behavior to the origins of human nature in Sociobiology: The New Synthesis stirred bitter controversy on the role of biology in human behavior in 1975. Wilson took on his critics with a further exploration of the science behind his theories in On Human Nature, a widely acclaimed text that gave Wilson his first Pulitzer. He received his second for The Ants, with Bert Holldobler, in 1991. Wilson also has been awarded a Guggenheim Fellowship (1975), the National Medal of Science (1977) and the Crafoord Prize (1990), which recognizes researchers in scientific fields not eligible for the Nobel Prize.

Known as the father of sociobiology — which attempts to explain the role of biology in social behavior — the 81-year-old two-time Pulitzer Prize winner helped shape the world’s thinking about biology and biodiversity during the key period in which a much clearer understanding of genetics came into play. He is one of the most astute and articulate advocates of preservation of the world’s diverse life forms.

Wilson, a Harvard University professor, has shaped modern scientific thought about genetics, evolution, human and animal behavior, and natural resource preservation. In his 2002 book, The Future of Life, he argues that the survival of human life depends on the preservation of the world’s vast diversity of plant and animal life.

A few years ago, he proposed an electronic encyclopedia with a page for every known species.

Thorp said of Wilson in 2004, “E.O. Wilson is the leading thinker and writer about organisms of our generation. He’s started revolutions in understanding how our genes influence our behavior and how biodiversity controls the planet.”

Commencement will be held May 8 in Kenan Stadium.