Board of Governors Bars Center for Civil Rights From Litigating 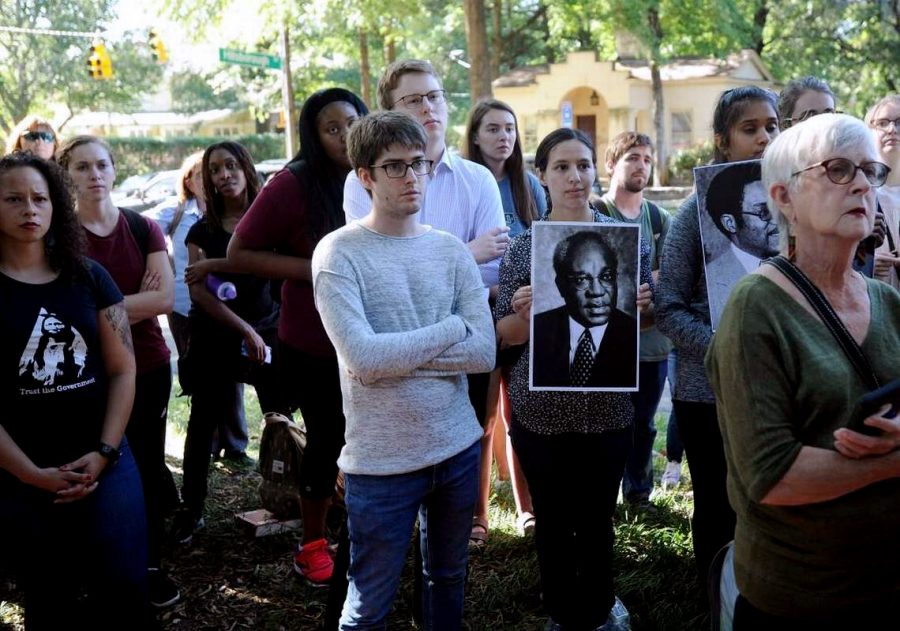 The UNC System Board of Governors approved a ban that will prevent the UNC law school’s Center for Civil Rights from litigating. (Herald-Sun photo by Bernard Thomas)

The UNC law school’s Center for Civil Rights’ practice of going to court against the state and other government entities as part of teaching law students was ended in a near-unanimous vote of the UNC System Board of Governors on Friday.

The board’s new policy bans all litigation along with any type of client representation.

Most of the center’s work is on behalf of low-income and minority groups, and now its future is uncertain — its director said recently that he doubted it could fulfill its mission if it no longer could hire lawyers to sue the government on behalf of disadvantaged clients.

Several Board of Governors’ members had made it clear they were uncomfortable with one state entity going to court against the state and local governments. There was a sizable public outcry against the litigation ban, and some people believe the board was playing politics with a law school whose faculty have spoken out against the state’s Republican-dominated leadership.

The Board of Governors did not ban law school clinics, which give students hands-on experience in a variety of legal fields but whose primary work is teaching. “That, to me, is the proper place for litigation in the University,” said Steven Long ’82, who guided the monthslong effort against the center’s litigation work. His position has been that the state should not hire full-time attorneys to sue itself or its municipalities. Several members who voted for the measure professed their support for the pursuit of civil rights.

Pearl Burris-Floyd ’78 was one of two members who spoke in testimonial to the center’s founder, the late Julius Chambers ’62 (LLBJD). She recalled “poor people from all over North Carolina who have benefited from the Center for Civil Rghts.” The 28-member board was at or near full attendance, and Burris-Floyd was one of only three who voted against the measure; one board member abstained. Anna S. Nelson, who also voted no, said the decision was a “reputational” issue for UNC.

James Anderson, chancellor of Fayetteville State University, said, “This is a day of reckoning” for the UNC System.

The center’s leadership considers it vital to the training of civil rights lawyers. Director Ted Shaw gave a passionate message in August to the BOG committee that recommended the decision. He charged Long with “an ideological hit — everybody knows why we are here and what the politics are. We should not engage in the politics of McCarthyism in the present day.”

No one spoke on behalf of the University in the discussion prior to the vote.

Shaw stopped outside the meeting hall Friday to speak to about 35 people who came to protest the anticipated decision. “What they did today is shameful,” he said. “We will continue the struggle.”

Chancellor Carol L. Folt said in a statement after the meeting that she was disappointed.

“I believe that the University and the people who testified on behalf of the center made a compelling case about why the center is so important to the people of our state. I am proud of the center, its history and all who worked so hard to answer the board’s questions and provide important facts about how the center serves the needs of our citizens.

“We now must determine a path forward for the center and reconfirm our commitment to educating the next generation of civil rights lawyers and providing assistance to the poor and disadvantaged in North Carolina.”

System President Margaret Spellings did not publicly voice a position on the litigation issue.

The center’s lawyers are state employees, but they are paid exclusively with privately raised funds. The center has trained more than 600 students since its founding 16 years ago.

In response to a number of questions from individual BOG members, the center in May issued a 56-page report about its mission written by a committee appointed by Folt and reviewed by Provost James W. Dean Jr., law school Dean Martin Brinkley ’92 (JD) and others. The committee issued a supplemental report that outlined five alternatives for the center — none of which, it said, could be guaranteed to uphold the center’s mission.

In the August debate, Long pointed to cases in which the Pitt County school system, sued over alleged resegregation, spent $500,000 worth of textbook money to defend itself against the center’s lawyers. Walter Davenport, the third member of the board who voted no on Friday, asked: Wouldn’t Pitt logically have had to go up against other attorneys if the Center for Civil Rights had not been involved?

Shaw, who in addition to directing the center is the Julius L. Chambers Distinguished Professor of law, defended the litigation function in an article in a newspaper op-ed article, writing that the proposed policy change “is tantamount to saying that law schools cannot teach one of the core functions of lawyering, especially for civil rights and public interest lawyers, by experiential learning.”

BOG Chair Louis Bissette ’68 (JD), said the vote “doesn’t show a lack of support for the law school” or the civil rights center. “It’s about a particular aspect of the Civil Rights Center’s work.”

The center first came to the Board of Governors’ attention three years ago in a review of the about 240 centers and institutes at all UNC System campuses. That review resulted in the closing of the UNC Center on Poverty, Work and Opportunity, which was seen as a political move by the GOP-dominated board.