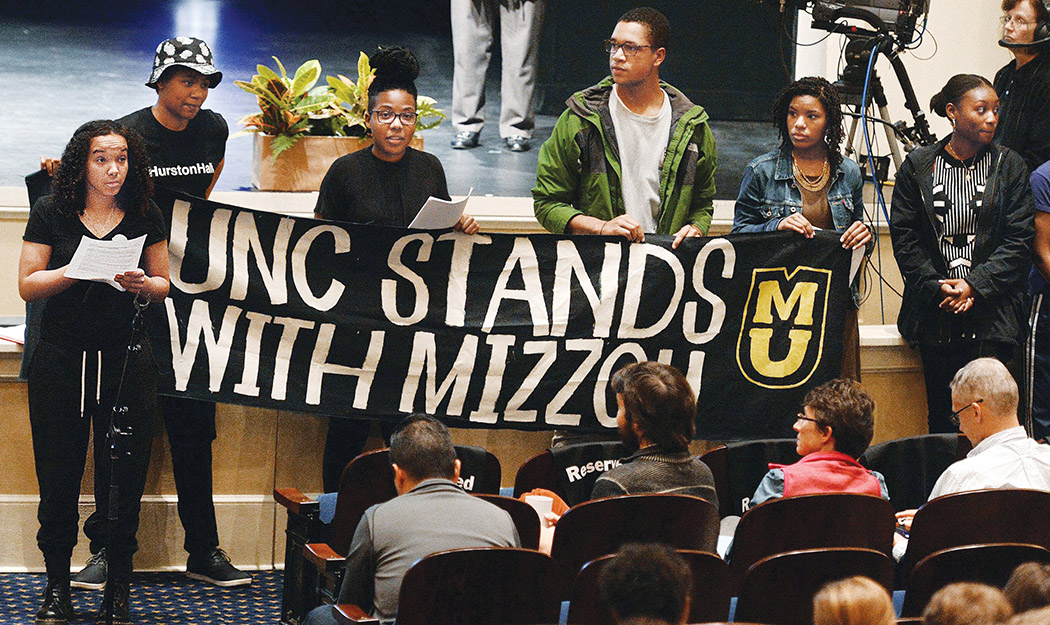 Individuals who interfere with the free speech rights of others will face a range of penalties, including expulsion, under a new policy approved by the UNC System Board of Governors. (News & Observer photo by Chuck Liddy)

Acting on a state law that mandates a new policy on free speech on institutions in the UNC System, the system’s Board of Governors has approved a range of penalties — including expulsion — for individuals who interfere with the free speech rights of others at Carolina and the state’s other public universities.

The system “affirms its long-standing commitment to free speech and free expression for its students, faculty members, staff employees and visitors.”

The policy also says that the system’s role in encouraging free expression “requires ensuring the opportunity for expression of differing views regarding many issues in multiple areas of study, research and debate, including current political and social issues.”

The new policy comes amid a highly visible public controversy over whether the Confederate monument Silent Sam should be removed from McCorkle Place, where it was installed in 1913. The fall semester began with boisterous protests over the statue and the presence of counter-protesters. Students and others have maintained a regular vigil around the monument and at times have had tense encounters with people who believe the statue should be left alone.

The policy emphasizes that assembly and “spontaneous expressive activity” are permitted “as long as such activity is lawful and does not materially and substantially disrupt the functioning of the constituent institution.” Examples of disruption include disorderly conduct and other incidents of disruption as defined by state law, violation of a chancellor’s designation of a curfew, and action that results in a trespass notice from law enforcement.

Those who disrupt the functioning of the UNC General Administration or the operations of an individual institution in the system or who interfere with the “protected free expression rights of others” are subject to a full range of disciplinary actions — including suspension, dismissal and expulsion. Second violations should result in at least suspension, and third violations can bring dismissal or expulsion. The policy provides administrators at individual institutions with leeway on punishments and with a process of appeals.

The American Association of University Professors and the American Civil Liberties Union came out in opposition to the new policy, according to a report in The News & Observer, saying the policy could discourage the kind of open discourse that could adversely affect free speech. Meanwhile, at least one conservative group said the change was simply an affirmation of students’ rights to free speech.

The BOG’s vote on the new policy, which had been discussed in committee, was approved unanimously and without discussion on Dec. 15 and took effect immediately.