With the pandemic economy hitting Fusion Fish in Meadowmont pretty hard, just as it has the rest of the restaurant industry, and with Fusion Fish’s lease coming up for renewal, co-owner Yung Nay decided to...

The COVID-19 pandemic has made keeping a distance a way of life. But for chef Dan Jackson ’03, it also has presented an opportunity to fulfill a dream close to home. Jackson is the chef...

Breadmen’s Moving Ahead of Apartment Project 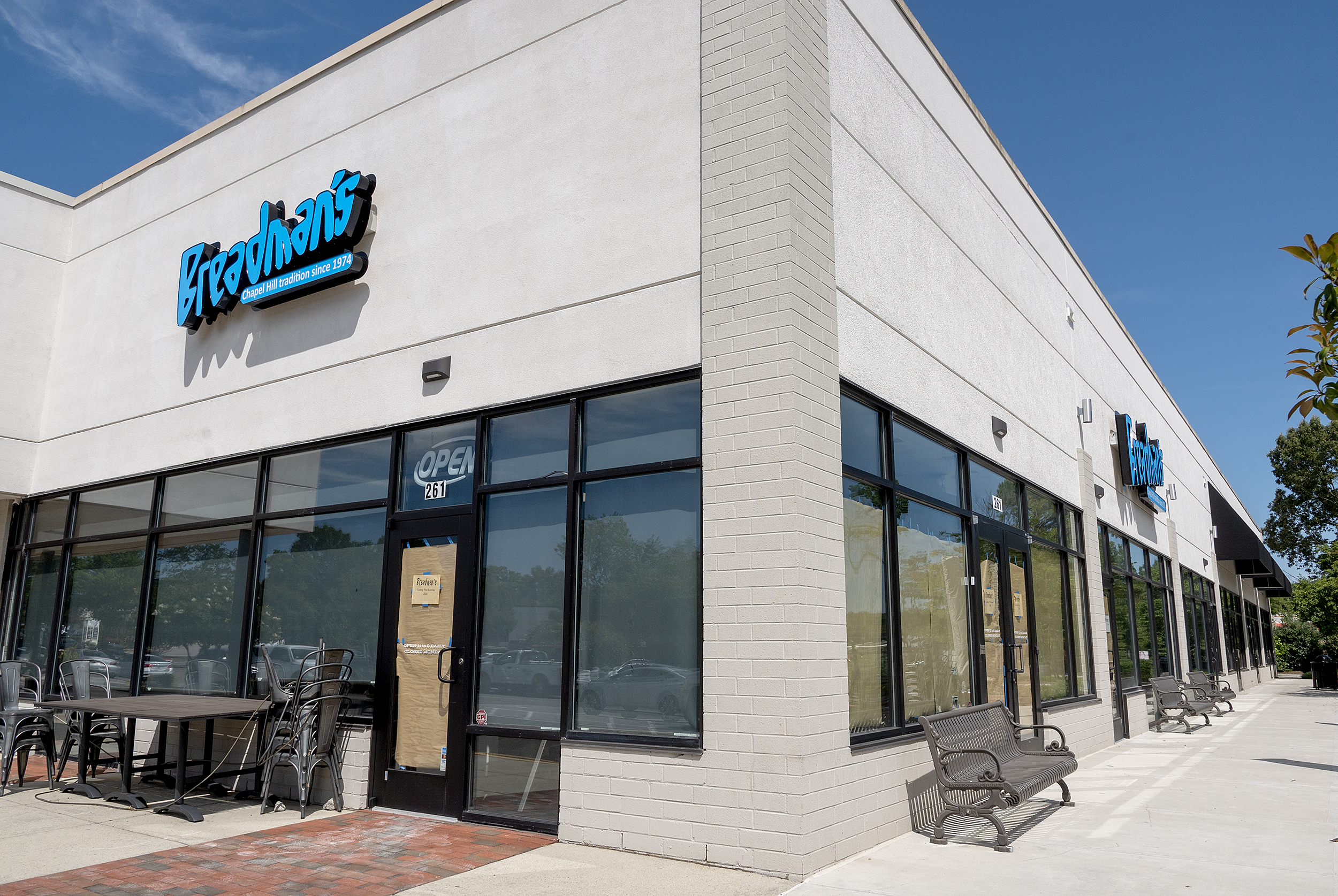 The diner will relocate to Elliott Square on South Elliott Road in a storefront that most recently was home to Haw River Grill. (Grant Halverson ’93)

Come the last day of July, Bill Piscitello will be perched in a lawn chair atop a hill overlooking Breadmen’s on West Rosemary Street, a cold drink in hand, watching the bulldozers move in. His older brother, Roy ’70, recovering from a health issue, won’t be there with him, but the two have had the past few months to say goodbye to the diner they have co-owned for more than 45 years.

Though Bill Piscitello hadn’t been in charge of day-to-day operations for the past few years, “I was still going in and hanging out and talking to people,” he said. But when the state’s pandemic stay-at-home order kept customers away from the dining room, “it got me into retirement mode.”

The Piscitello brothers have reached their 70s and are ready to hang up their aprons. They have partnered with Chapel Hill developer Larry Short to combine the Breadmen’s lot with adjacent parcels the Piscitellos own to create a 2.2-acre site where Short plans to build five four-story apartment buildings.

The diner will relocate to Elliott Square on South Elliott Road in a storefront that most recently was home to Haw River Grill. Luis Castro and his son, Omar, who have run Breadmen’s for the past five years, will become the new owners.

None of Bill Piscitello’s three sons nor Roy’s son or daughter was interested in taking over Breadmen’s. They had seen the long hours their fathers devoted to making the diner a success.

“They like their weekends off,” Piscitello said. “I don’t blame them.”

Luis Castro has worked at Breadmen’s for about 20 years; Omar joined him 10 years ago. In recent years, as succession planning positioned them to take over, the Castros were mentored by the Piscitellos on what it takes to succeed in the restaurant business.

“They’re learning all the little stuff that goes into running a restaurant, other than just cooking eggs and collecting money,” Piscitello said.

When the diner opens in Elliott Square in early August, it will change its name to the singular Breadman’s for legal purposes. Diners likely won’t notice the difference. 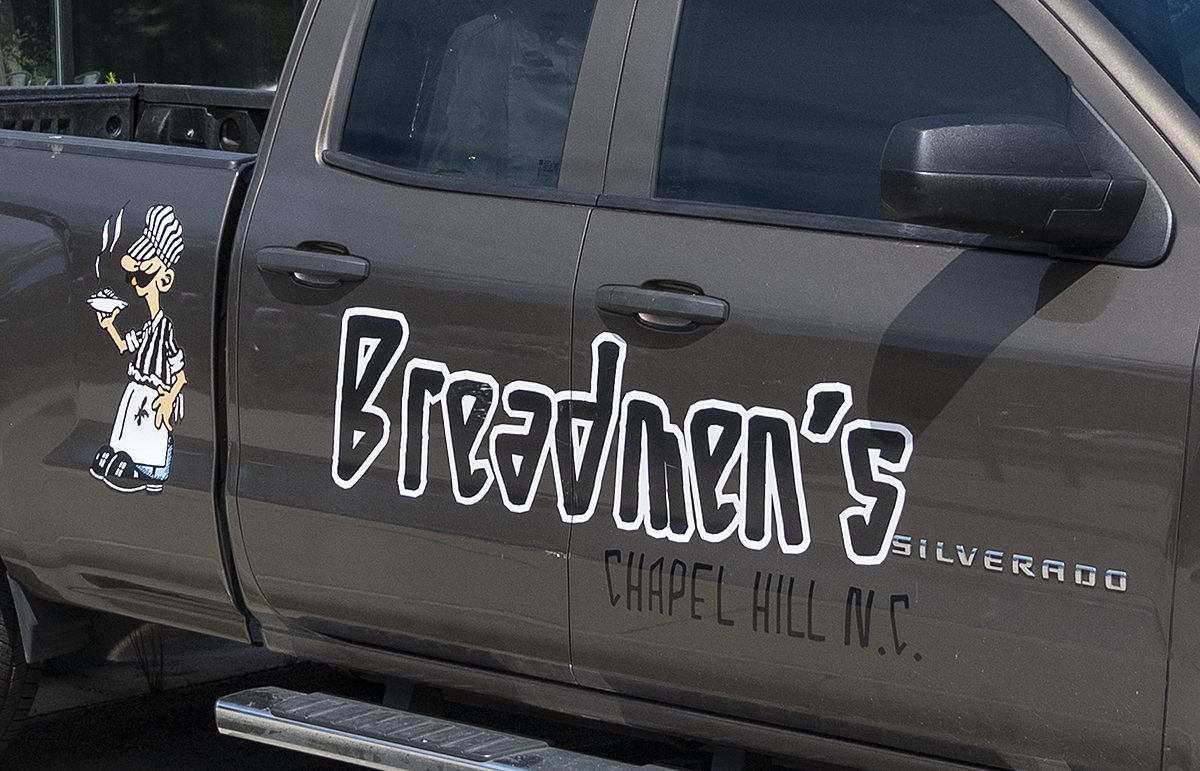 When the diner opens in Elliott Square in early August, it will change its name to the singular Breadman’s for legal purposes. (Grant Halverson ’93)

“A lot of people call us Breadman’s anyway,” Piscitello said, “because that was Roy’s nickname at his fraternity [Delta Upsilon].”

The menu at the new Breadman’s will stay much the same — barbecue ribs and chicken, fried chicken and chicken-fried steak, and of course — with the motto having been “breakfast served all day” — eggs. The health department required a few edits to the menu because the new place has less refrigerator space. Instead of 12 vegetable sides, Breadman’s will offer eight, and some of the specials will rotate.

“We’ve had more requests for avocados,” Omar Castro said, “but not so much on toast.”

The new decor will be similar to the old, though with less barn board. Situated on a corner, it has only two walls for memorabilia and basketball posters. Two walls are all glass and will bring in lots of natural light.

“Someone said, ‘It’s going to be like they stuck Breadmen’s in a washing machine on hot water, and it came out shrunk a little,’ ” Piscitello said.

The Castros will install one of the signs from the West Rosemary restaurant’s brick wall and try to find room for all of the posters. There will still be plenty of free parking. While the new location won’t be downtown within walking distance of campus and surrounding neighborhoods, Castro said few customers arrived at the West Rosemary location on foot. “People would meet with two or three others, and everyone would drive their own car,” he said.

A benchmark of success

The Piscitellos are auctioning the old restaurant’s equipment, but Bill wasn’t expecting a big bounty: “The market is getting flooded with used equipment because so many restaurants aren’t going to open back up.”

The restaurant industry standard considers a five-year run to be a success. The Piscitellos have far exceeded that benchmark in a college town, where a big segment of the clientele turns over within that span and an influx of chain restaurants often arrive and depart within a couple of class years. Roy opened Breadmen’s in 1974 as a place for a late dinner or early breakfast after the bars closed. His sister, Arlene Booker ’74, joined him initially, and they opened a second restaurant, Tello’s, in the space on East Franklin Street where Four Corners is now.

“We’ll still be a family-run restaurant.”

When Arlene returned to UNC for her MBA, which she completed in 1978, Bill moved to Chapel Hill to help run both eateries. A short time later, they closed Tello’s and concentrated on Breadmen’s, which at the time was in a smaller space on the south side of West Rosemary.

When the Western Sizzlin’ building across the street came on the market in 1992, Breadmen’s bought it and relocated. Twenty years later, the Piscitellos and Short teamed up to develop Shortbread Lofts apartments, in 2012, on the original Breadmen’s site.

The Piscitellos are looking forward to shedding the worry of making payroll every week and the tax bill every quarter and having the health inspector walk in just as they’re walking out to deliver a catering order. They’ll have time to play with grandkids and go fishing, “things you put on hold when you own a restaurant,” Bill Piscitello said.

The Castros are looking forward to continuing Breadmen’s legacy, including affordable food and chatty atmosphere, as well as another aspect: Omar’s sisters and brother will work there, too.

“We’ll still be a family-run restaurant,” he said.