When Bob and Robin Britt owned Merritt’s Grill, customers sometimes would wait close to an...

A new Caribbean café on East Rosemary Street serves up Latin-American comfort food.
Posted on May 13, 2022

If you don’t have time to get away for a weekend at the beach, take a vacation over dinner at Buena Vibra. The new Caribbean café offers a menu that people say reminds them of home, said Enggie Reanos, assistant manager and daughter of the eatery’s owners, Jaime Reanos and Carla Solorzano.

Reanos said her parents renovated the space that had once been occupied by two short-lived bars, Country Fried Duck and Night School, which closed in 2019. Her parents brightened up the place with vibrant colors and warmed the décor with plenty of plants.

“My dad had a construction company and wanted something new,” she said. “My mom’s always been a good cook.” Neither had previous experience running a restaurant, but they knew how to make a space feel homey and fill it with good food.

Among the most popular dishes are churrasco con chimichurri (marinated beef with a spicy green sauce served with rice and beans) and pescado frito, a traditional Honduran fried fish with shrimp and plantain chips. In-demand appetizers include tequeños (Venezuelan crispy fried cheese sticks) and empanadas with chili sauce.

On weekends, Buena Vibra pushes the tables to the wall to create a dance floor and hosts live music. The establishment also has a full bar. 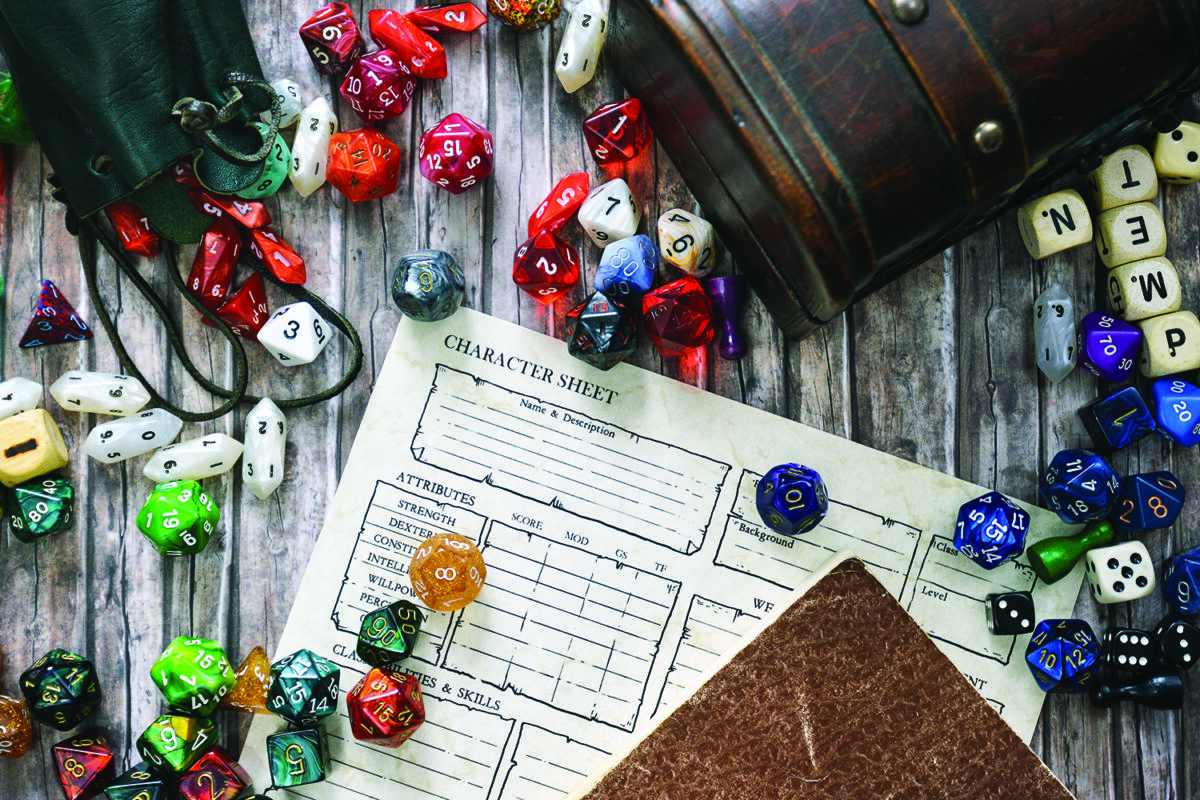 Don Tiver and his business partner Josh Goodsell had been in gaming spaces that resembled big-box stores with fluorescent lights. They thought the bar and wooden booths on the floor above Buena Vibra would make an excellent alternative.

“It’s a different angle on playing games and hanging out in general,” Tiver said.

Tiver and Goodsell opened The Gathering Place for retail gaming in early February, and once they got their license to serve wine and beer, they hooked up 30 taps to 12 craft beers, four wines, two ciders, sake, kombucha and several nonalcoholic options, such as seltzer, cold-drip coffee and root beer.

Gamers can come in without a reservation, either bringing their own decks and set-ups, playing with one of the free games or purchasing a game from a wide selection. Tiver and Goodsell set up long folding tables for tournament play and organize weekly evening events for the more popular games. A schedule lets customers know when other people who are going to play a specific game are likely to be around.

The Gathering Place doesn’t serve food, but Buena Vibra and other nearby eating establishments will run food up when customers ask Tiver or Goodsell to place an order.

Chapel Hill has a strong gaming community, Tiver said, and The Gathering Place aims to provide a comfortable place to hang out.

“Our target market is all nerds,” he said. “Game nerds, beer nerds, every type of nerd.”

At its Jan. 27 meeting, the UNC Board of Trustees approved plans that call for razing the historic buildings on the west side of the alley and the structure behind Carolina Coffee Shop and replacing them with larger, taller buildings to house the Office of Undergraduate Admissions and UNC Visitors Center (among other University offices) and some retail shops. As a result of community input, UNC plans to retain the façade of the coffee shop. Iconic businesses such as Johnny T-Shirt and Cosmic Cantina operating in the building to the west will have to relocate.

What’s Popped Up at Blue Dogwood

The food court tucked at the back of the parking lot at 304 W. Franklin St. has served as something of a test kitchen for independent eateries.

HToo Asian Fusion has kept its winning streak going since May 2021. Owner Saw Htoo, born and raised in Malaysia, worked at a sushi restaurant in Chapel Hill before venturing out on his own. His specialty is curry laksa, a soup with coconut noodles, chicken, shrimp and tofu puffs. His menu also includes sushi made to order, spicy crab salad and sushi tacos. htooasianfusion.square.site

Once the sun goes down, Buckets at Chapel Hill takes over, serving boneless chicken wings, chicken sandwiches, and chicken and waffles. UNC sophomore William Gerstein launched his franchise as a high school senior in Ripon, Wisconsin, then brought it to Chapel Hill this year.

He donates a percentage of his profits to charity. Gerstein named different combo meals for coaches and athletes, and lets them choose which nonprofit will benefit.

After 31 years of dishing up Southwestern cuisine favorites, Margaret’s Cantina closed its doors for the final time at the end of March.
Margaret Lundy opened the cantina and bar in 1990 in a vacant storefront in the sparsely populated north end of town. Local providers stocked her kitchen, and the work of local artists decorated the walls. She ran the place until 2014, when, her health failing, she sold the business to Young Fenton, who previously owned Merlion, a Singaporean restaurant in Southern Village.

Fenton stayed true to the recipes that had made the cantina a success. Margaret’s held on through the pandemic, but the slow economy took its toll. Faced with whether to sign a new lease in the gentrifying shopping center, Fenton made the difficult decision not to renew.