Even though Jason Walsh ’06 has some high-profile fitness clients — a Hollywood A-list that has included Amy Adams, Matt Damon and Jennifer Aniston — they don’t outshine his work with less stellar folks.

But the star power provided just the pivot to keep his two California-based fitness companies, Rise Nation and Rise Movement, going through the great pandemic shutdown — a survival journey that at times seemed as treacherous as some of his clients’ action movies. And like them, it involved making it big onto screens, whether big or little.

“We did a lateral shift for Rise Movement, training virtually,” Walsh says. “It was something I’d been resistant to for years, because I still think in-person is better. But the team and I were able to adapt, and it saved the business. Even with in-person resuming, we’ll keep it in the business model moving forward because it broadens our reach.”

Stressing safety as well as efficiency and effectiveness, Walsh’s Rise Nation fitness boutiques offer a holistic approach to people who come through the door, whether they’re trying to make sure they could survive as a secret agent running for his life, like Damon, or just don’t want to get weak and flabby. Walsh has franchises all over the country and as far away as Australia, with more coming — underwritten by Dallas Mavericks owner Mark Cuban as a major investor.

Rise Movement is the celebrity side of the business, with Walsh the go-to guru for actors looking to remake themselves physically. Video of a training session with actress Brie Larson doing one-arm pull-ups while bulking up for her role as Captain Marvel in The Marvels went viral last year. Walsh also helped Emma Stone prepare for her role as 1970s tennis star Billie Jean King in the 2017 film Battle of the Sexes. And when Bradley Cooper needed a super-sized physique to star in 2014’s American Sniper, Walsh kept his sights focused on the process.

“He had to put on 40 pounds, and it was insane, a major transformation that took a lot of hard work and dedicated diet of huge calories in a short amount of time,” Walsh said. “We had about three and a half months to do it, and it was one of the toughest projects I’ve done. I told him, ‘I do not know what will happen, but I’ll give it a good shot. I’ll do everything in my power and understanding to get you where you need to go.’ ”

There’s also psychology involved, usually in overcoming trepidation at the rigors — and possible wear and tear — of the process. At the onset of her Captain Marvel makeover, Larson had some doubts. But once she started to see progress, she embraced Walsh’s regimen. Then there’s Damon, who worked with Walsh to get in shape for the Jason Bourne movie series as well as the science-fiction film Elysium. 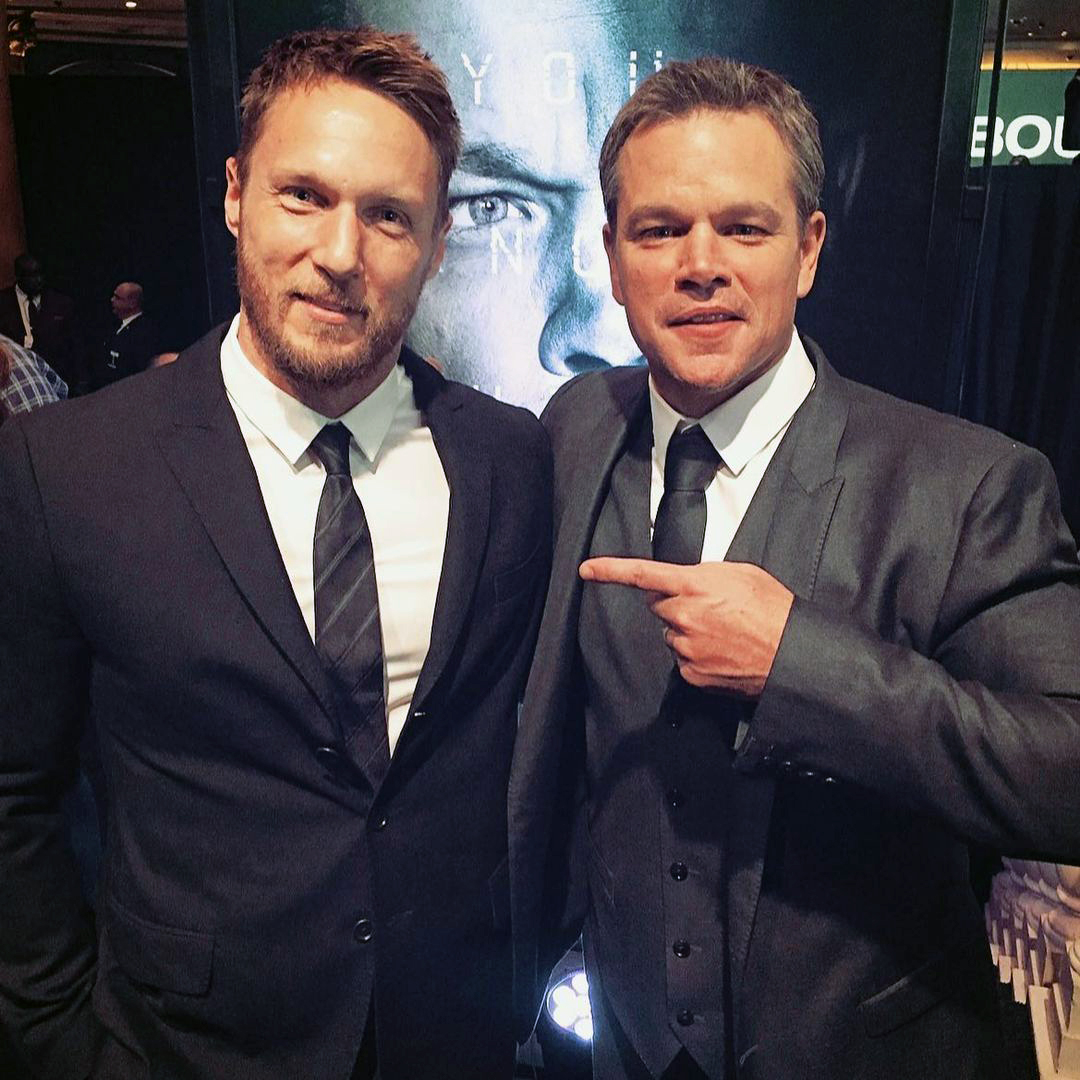 Walsh helped Matt Damon get in shape for the Jason Bourne movie series and the science-fiction flick Elysium. Photo courtesy of Jason Walsh ’06

“Matt Damon was tough because he was older and had worked with multiple trainers. … He had a longtime association between working out and getting hurt,” Walsh says. “I had to talk him into giving me a chance to address issues and problems with his shoulders and back. Once I gained his trust, the lines of communication became much broader.”

Walsh took a circuitous route into the training field. He was sidetracked a number of times during college, including a serious car wreck and a crowbar beatdown suffered while trying to break up a fight. But he eventually wound up at UNC, interning in the University’s athletics conditioning program under Greg Gatz, director of strength and conditioning for Olympic sports.

Gatz became a mentor and so did Luke Richesson, a strength coach for the NFL’s Denver Broncos and Houston Texans. As he learned the trade with such prime physical specimens, Walsh realized there might be a niche for applying such specialized knowledge to the general public.

“Strength is important, but understanding how you can recognize and adjust and heal and recover was a new level for me,” he said. “When I was growing up in the ’90s, strength and conditioning was kind of secret, to be utilized by professional athletes. I always just worked as hard as I could … learning by doing. Once I came to know this whole world of information with kinesiology, it was exciting. The science of movement sparked my interest.”

Walsh’s process is centered on high-intensity interval training with a climbing machine he says makes for the best, safest workout because cross-crawl climbing is a natural motion for humans.

Actress Jessica Biel and singer Justin Timberlake were Walsh’s earliest celebrity clients, and then word started to get around. Now he’s likely to attract performers like Lady Gaga getting in shape for a concert tour or actor John Krasinski buffing up to play a former U.S. Navy SEAL in 13 Hours: The Secret Soldiers of Benghazi.

While he avoids the label “celebrity trainer,” earning the stars’ trust does send a signal to other clients.

“Most people come in trusting me,” Walsh says. “But people in entertainment have the most sensitive BS meters of anybody. Give them a reason, and they’ll move on, and rightly so because people are always wanting to exploit them.”