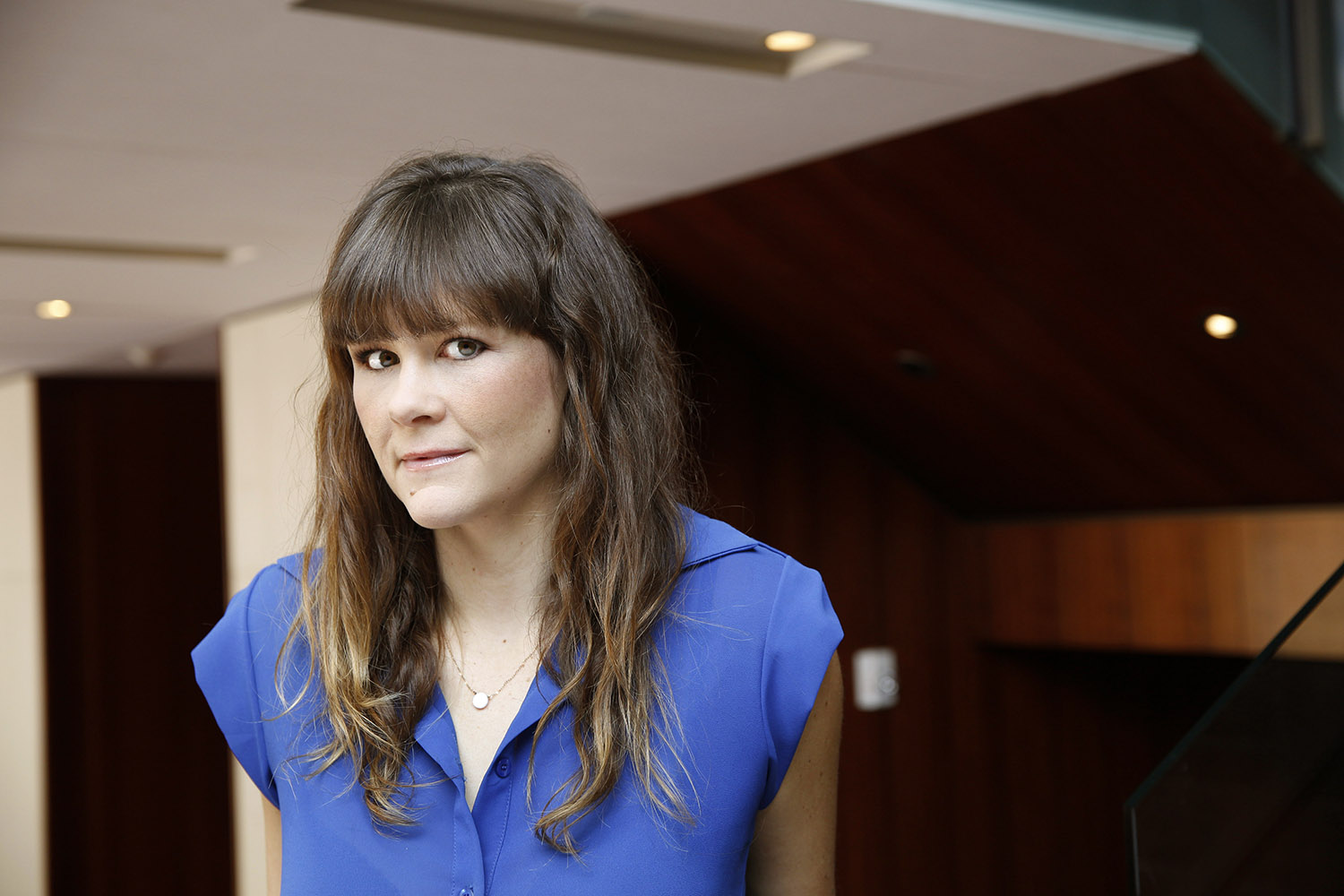 Bekah Brunstetter ’04 tries to have her works end with a semblance of hope. (Photo by Elisabeth Caren)

On one side of the cafe table is Della, a conservative, Christian, Southern bakery owner whose recipes bring order to both her kitchen and her life. On the other is Jen, a hometown girl and family friend who’s returned from the North in search of a cake — and of unlikely acceptance — for her wedding to Macy, who happens to be a woman.

Between them sits a shared takeout bag of the most revered and controversial chicken nuggets in the fast-food universe.

“Oh! I’m sorry,” says the baker, nervously. “Isn’t there something about Chick-fil-A not supporting — ”

As writer Bekah Brunstetter ’04 shows throughout her funny and moving play, The Cake, reconciling traditional roots with progressive values in a polarized world is wrenching work. And while no one should expect to abandon the things that sustain her — be it waffle fries, her faith or the person who has captured her heart — what should be expected, the play shows, is conversation, with a generous dash of understanding and more than a pinch of heart.

Brunstetter knows that’s easier written than done. The Winston-Salem native, now a Los Angeles playwright and television writer and producer for NBC’s acclaimed family drama This Is Us, has long struggled to bridge the divide between her own progressive politics and those of her conservative parents, including her father, former N.C. Sen. Peter Brunstetter. In 2011, the Republican lawmaker sponsored North Carolina’s Amendment 1 in the state Senate, which limited marriage to a legal union between a man and woman only. (The law was declared unconstitutional in U.S. District Court in 2014.)

That prompted Brunstetter, who supports same-sex marriage, to bake The Cake.

“I have a lot of respect for my parents,” she said. “And I’ve had a real tough time having these conversations where we disagree. I tend to keep things inside. But when I’m writing a play, I’m living my fantasy life. I’m a person who’s incredibly articulate and brave, who says what she thinks and feels all the time.”

But what we always try and do is end with some semblance of hope. … The world is so dark right now, and we just don’t need our TV to remind us.”

The play opened in Los Angeles in early 2017 and made its regional debut at PlayMakers in Chapel Hill last fall. It shares similarities with the real-life story of a Colorado baker who refused to make a wedding cake for a gay couple, a discrimination case now before the U.S. Supreme Court. It offers plenty of soul-searching opportunities for both ends of the political spectrum. Although Della’s beliefs are challenged, she’s also a warm, authentic character with instant likability.

“I’m sick of seeing conservative people dismissed and called idiotic and hateful when I do see love in that community,” Brunstetter said. “I wanted the audience to fall in love with Della and her husband — and then to tell the story about them opening up a bit to the idea of change. To show how difficult that is, but to also show it happening — so that it can tell a story of hope.”

Looking for good in the world attracted her to the Emmy-award-winning show This Is Us, which follows the ups and downs of the fictional Pearson family. Like her plays, it inspires laughter and mountains of tissues — often simultaneously.

“It’s a drama,” Brunstetter said, “so things have to go badly for these characters. But what we always try and do is end with some semblance of hope. … The world is so dark right now, and we just don’t need our TV to remind us.”

She began playwriting as an undergraduate . “I’m thankful to my parents for not trying to dissuade me from writing,” Brunstetter said. “Not for a second did they ever say, ‘What if you studied business?’ They’re really supportive and they delight in everything I do.”

Peter Brunstetter saw The Cake with his daughter in Chapel Hill. As with the characters in the play, she says her parents are still processing The Cake. “It’s not that, overnight, we all understood each other completely. But the important thing is, now that I’ve written the play and now that they’ve seen it, it’s the beginning of a conversation.”

“Step Into Those Shoes”: Mike Wiley ’04 (MFA) often plays more than two dozen characters in a single performance, with no costume changes and few props.