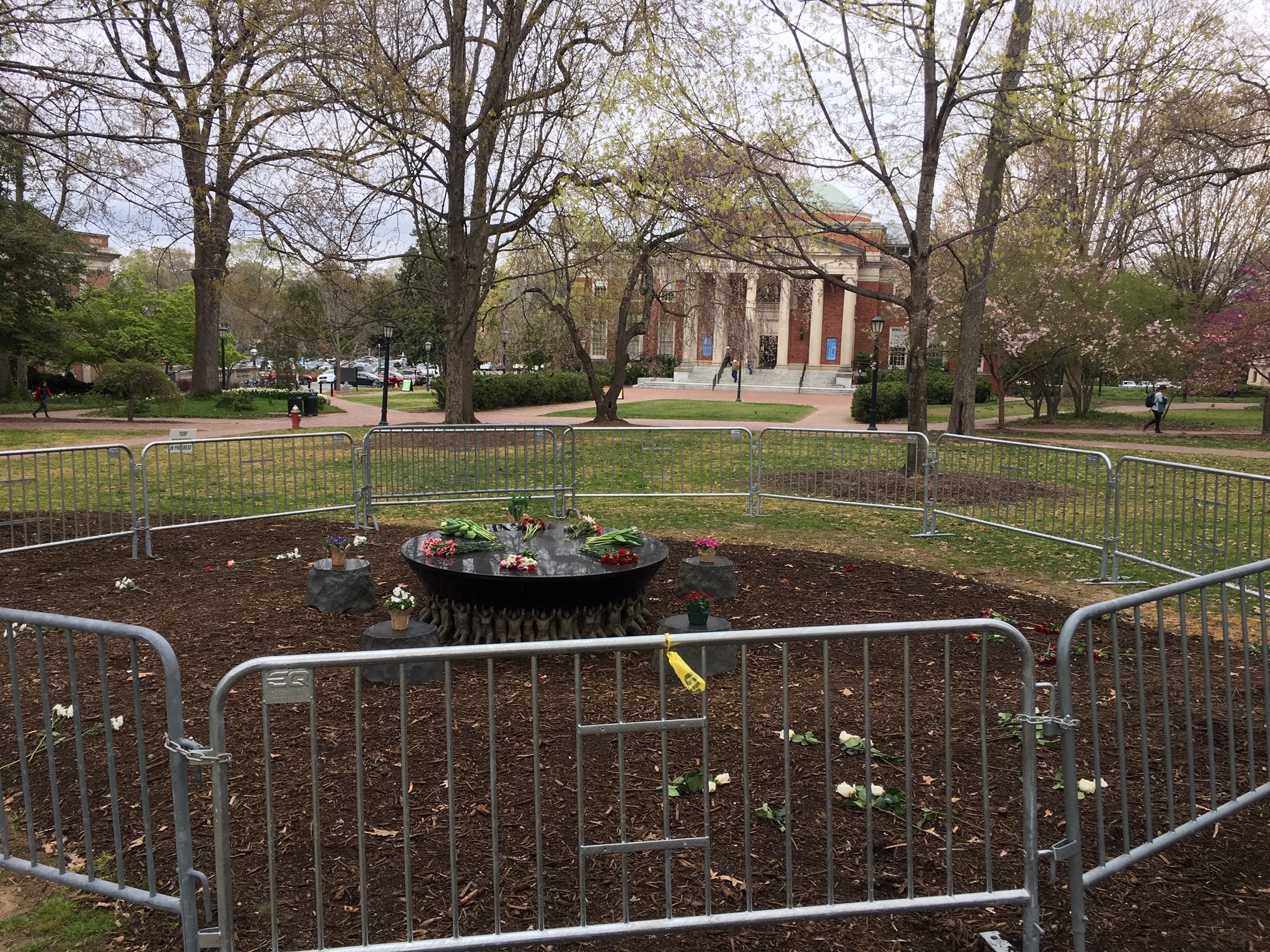 The campus was rocked in mid-April by several of what University officials characterized as racist and anti-Semitic incidents.

Two people were arrested for vandalism of art objects that involved racist graffiti; anti-Semitic posters were found in Davis Library and Hamilton Hall; and a conference titled “Conflict Over Gaza,” co-organized by UNC and Duke University and held at Carolina, came in for sharp criticism, including from interim Chancellor Kevin Guskiewicz and law school Dean Martin Brinkley ’92 (JD).

Two middle-of-the-night acts of vandalism against the Unsung Founders Memorial on McCorkle Place and an art installation near Hanes Art Center were labeled “racist actions” by Guskiewicz, who twice addressed the campus community in emails and  posted on Twitter about the conference.

“At approximately 1:30 a.m. [March 31], two individuals defaced the Unsung Founders Memorial, writing racist and other deplorable language on it,” Guskiewicz wrote. “University Police contacted the facilities department, and the Memorial was cleaned. In addition, University Police discovered that an installation outside Hanes Art Center was also vandalized with hateful language and racial slurs today.” Investigations were opened into both incidents. 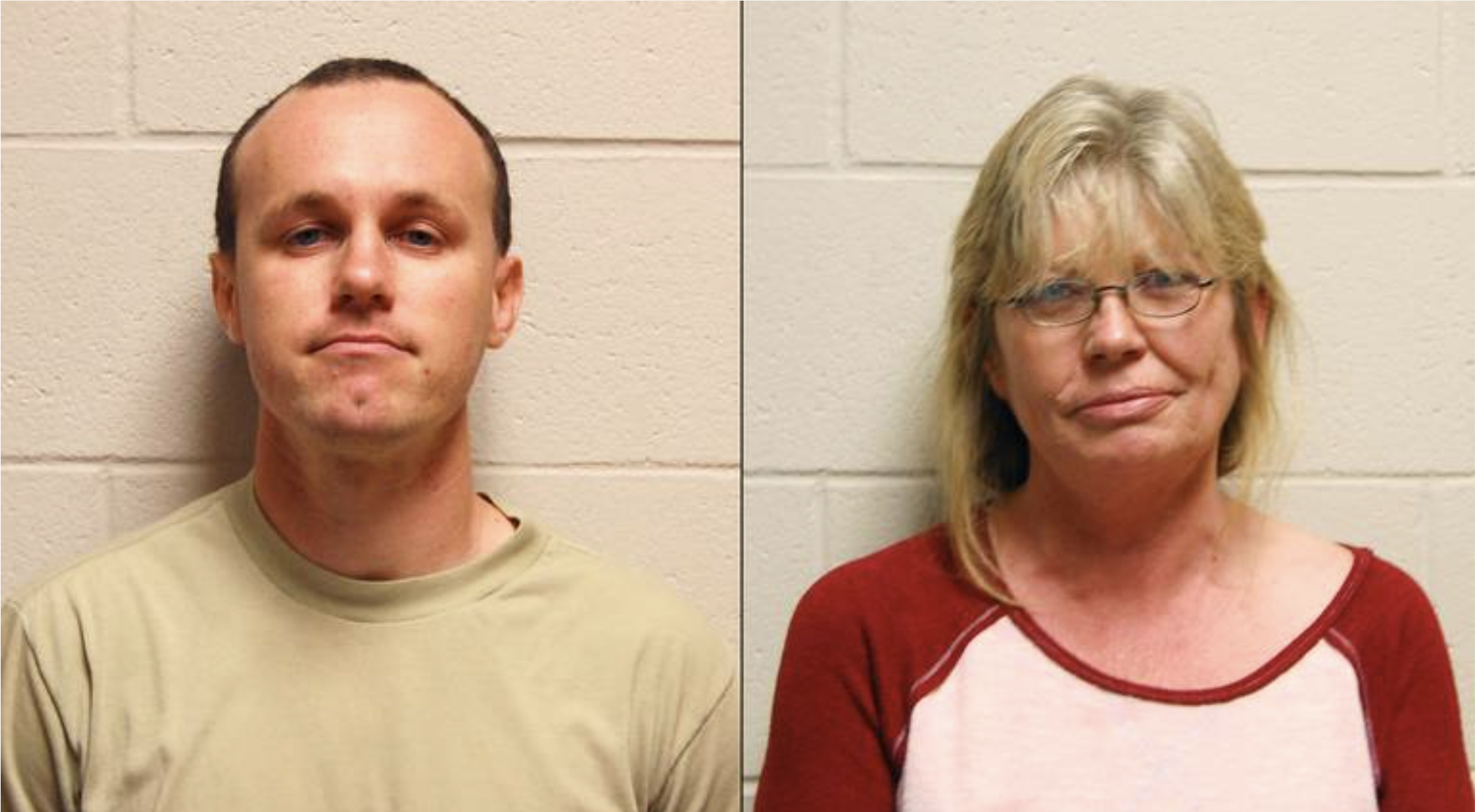 UNC Police later arrested Ryan Francis Barnett, 31, of Sanford and Nancy Rushton McCorkle, 50, of Newberry, S.C. Barnett was charged with vandalism, ethnic intimidation and public urination; McCorkle was charged with vandalism and ethnic intimidation. A criminal summons also was issued to both for the theft of a flag from the UNC System’s Spangler Building. Both also received a warning of trespass from UNC Police. Barnett and McCorkle were not armed, according to police.

The Unsung Founders, a sculpture near Graham Memorial and Alumni Hall, is the gift from UNC’s class of 2002 and was installed in May 2005. It is dedicated to the people, enslaved and free, who labored to build the foundations of the University. It is a short distance from where the Confederate monument Silent Sam stood.

Prior to the arrests, Guskiewicz wrote that one person sought by police “is known to be affiliated with the Heirs to the Confederacy.” Those who wanted the Confederate statue removed from campus and those who support it have clashed before, sometimes violently.

The head of Heirs to the Confederacy, K. Lance Spivey, said that his group would not support the desecration of monuments. “Neither myself nor the Board of Directors ever has or ever would sanction such an act; it goes against everything we stand for,” Spivey wrote. “If these acts of vandalism were in fact committed by any member(s) of Heirs, then the perpetrator(s) were acting on their own, in a renegade capacity and unsanctioned by the Board of Directors.”

The Confederate statue was pulled down by protesters in August; in January, then-Chancellor Carol L. Folt ordered its pedestal removed as she announced that she planned to resign. Members of the UNC System Board of Governors and the UNC trustees are deciding on the disposition of the monument, with what is now a mid-May deadline.

During the week of April 8, University Libraries officials found several anti-Semitic posters on bookshelves and tables in Davis Library. Individuals with information about the incidents or who observed suspicious activity related to these flyers were asked to call 911.

“I am extremely disappointed and appalled that anyone would write these abhorrent messages and direct them toward members of our Jewish community,” Guskiewicz wrote. “This behavior conflicts with the University’s long-standing commitment to fostering an environment where all students, faculty and staff can be free from harassment.”

North Carolina Hillel published a statement that read in part that the foundation for Jewish campus life was “outraged that vicious anti-Semitic flyers, referring to ‘an evil Jewish plot,’ were placed at Davis Library at UNC-Chapel Hill this week. … We are disgusted by the vile and hateful rhetoric on these flyers. The language is reminiscent of centuries-old, anti-Semitic rhetoric that incited the murder of thousands of Jews in pogroms throughout Eastern Europe and the murder of millions of Jews during the Holocaust.”

“This behavior conflicts with the University’s long-standing commitment to fostering an environment where all students, faculty and staff can be free from harassment.”

Anti-Semitic posters also were discovered taped to doors and offices on several floors of Hamilton Hall on April 11. UNC Police were investigating both incidents.

“Conflict Over Gaza: People, Politics, and Possibilities,” presented by the Duke-UNC Consortium for Middle East Studies and sponsored by the College of Arts and Sciences and about 25 other entities on campus, was held March 22-24 at the FedEx Global Education Center. Footage of a rap performance at the conference surfaced on YouTube, and critics said the rapper used anti-Semitic language as part of his presentation.

One sponsor of the conference was the law school, and dean Brinkley wrote to the law community: “The performance contained anti-Semitic content that the UNC School of Law utterly condemns.” Brinkley explained how the school approaches such sponsorships and added: “Please know that we will not tolerate any form of anti-Semitism at Carolina Law.”

Guskiewicz posted on Twitter: “A performance during a recent conference held on our campus contained disturbing and hateful language. Like many members of our community, I am heartbroken and deeply offended that this performance happened. I stand steadfast against anti-Semitism and hate in all its forms. The Carolina spirit is not about hateful speech that divides us, but about civil discourse that advances ideas and knowledge. We must continue to aspire together to that ideal.”

Setting up a safety commission

All of this followed a March 16 incident where one of several Confederate supporters walking on campus was found in possession of a handgun. Police asked the man to leave campus and warned that in the future “those found with a weapon on campus will be arrested and issued a warning of trespass.”

Guskiewicz, who has initiated a review of that incident,  wrote that he would convene a campus safety commission “to take a broader look at all aspects of community safety, including building relationships with campus police. Composed of students, faculty and staff, this group will engage in dialogue, foster trust, enhance our collective good and advise me of their recommendations. I will announce the members of this commission and further outline their charge within the next month.”

Guskiewicz also plans to meet with campus groups “to hear directly how the community envisions our work to eliminate racism and inequality while promoting equity and inclusion on campus.”