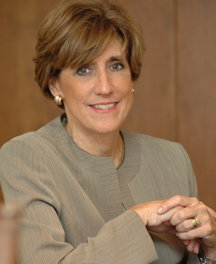 Susan King, vice president for external affairs for the Carnegie Corporation of New York, will be the next dean of the School of Journalism and Mass Communication.

The appointment, effective Jan. 1, was approved this month by the UNC Board of Trustees. King also will hold the title of John Thomas Kerr Distinguished Professor in recognition of career accomplishments.

Prior to Carnegie, King worked nearly five years in the U.S. Department of Labor as the assistant secretary for public affairs and as the executive director of the Family and Medical Leave Commission. Her journalism career included stints with ABC, CBS and NBC News. At CBS, she was a correspondent for Walter Cronkite.

King was also an independent journalist reporting for CNN and ABC Radio News. She was a local television news anchor at stations in Buffalo, N.Y., and Washington, D.C. She has hosted the “Diane Rehm Show” and “Talk of the Nation” for National Public Radio.

King has a bachelor’s degree in English from Marymount College in Tarrytown, N.Y., and she earned her master’s degree in communications from Fairfield University in Fairfield, Conn.

Carolina is one of a dozen universities participating in the Carnegie-Knight Initiative’s News21 experimental reporting program launched by King. The school won more than 40 national and international and awards for its News21 contribution, Powering a Nation. The site was named one of the top three multimedia productions in the world by World Press Photo and was a finalist for a Webby Award. Its stories have been featured on major media sites including washingtonpost.com and latimes.com.

“As the digital age brings swift changes to the way we communicate, the school’s curriculum is continuously updated so that our students will not only have the skills they need but also be able to lead the news industry into the future,” Thorp said in a statement released by the school. “Susan King’s impressive work as an architect of the Carnegie-Knight Initiative on the Future of Journalism Education shows her ability to prepare a new generation of communicators to seize the opportunities of the fast-moving multimedia era.”

The previous dean, Jean Folkerts, stepped down after five years as dean on June 30 to join the faculty to teach courses, conduct research and mentor students. Dulcie Straughan ’87 (PhD), former senior associate dean of the journalism school, has served as the school’s interim dean since July 1.