‘Never Forget Where You Came From’

For more than two centuries, Tar Heels have made their mark on the world. They’ve built businesses, been to space, governed states, saved lives and improved their communities.

And on May 14, the journeys of more than 6,000 new Carolina alumni began at Kenan Stadium. 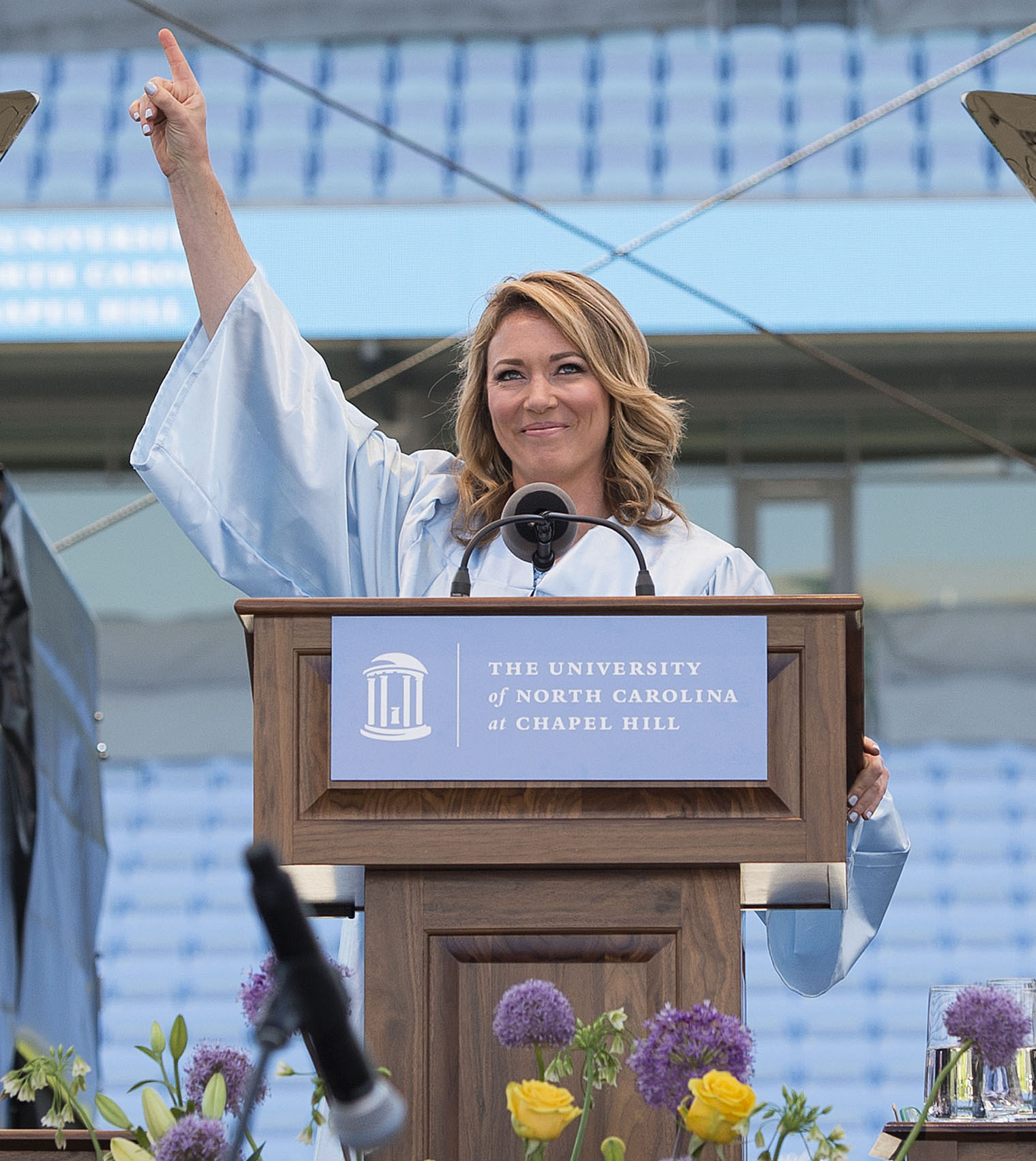 “Wherever you go, whatever you do, this Carolina degree carries with it a gravity, a legacy, a responsibility,” said Brooke Baldwin ’01, a CNN anchor and this year’s Commencement speaker. “And no one can ever take that away from you.”

Chancellor Carol L. Folt presided over the ceremony that drew nearly 25,000 of the graduates’ family and friends, as well as UNC System Board of Governors member Hannah Gage ’75, Board of Trustees Chair Dwight Stone ’73 and GAA Board of Directors Chair Teresa Williams ’77.

Among the degrees conferred Sunday were 3,815 bachelor’s degrees, 1,351 masters, 230 doctoral and 614 professional degrees from the schools of dentistry, law, medicine, nursing and pharmacy.

“You’ve become part of a special community — a community that expresses gratitude and the desire to do good, one that seeks to live life with compassion and humility, and expects to be judged by the content of your character,” Folt said. “These are the most lasting characteristics and qualities of Carolina that will stay with you and I truly believe they’ll become part of the communities you’ll create ahead, and will grow even stronger as your world view grows.”

Throughout their years at Carolina, Folt said, the class of 2017 has excelled in the classroom, won national championships, built companies, published papers and volunteered nearly 4 million hours of community service.

Noting that only 32 percent of Americans have a college degree, Folt told the graduates they now have a responsibility to use their degrees to help their communities. 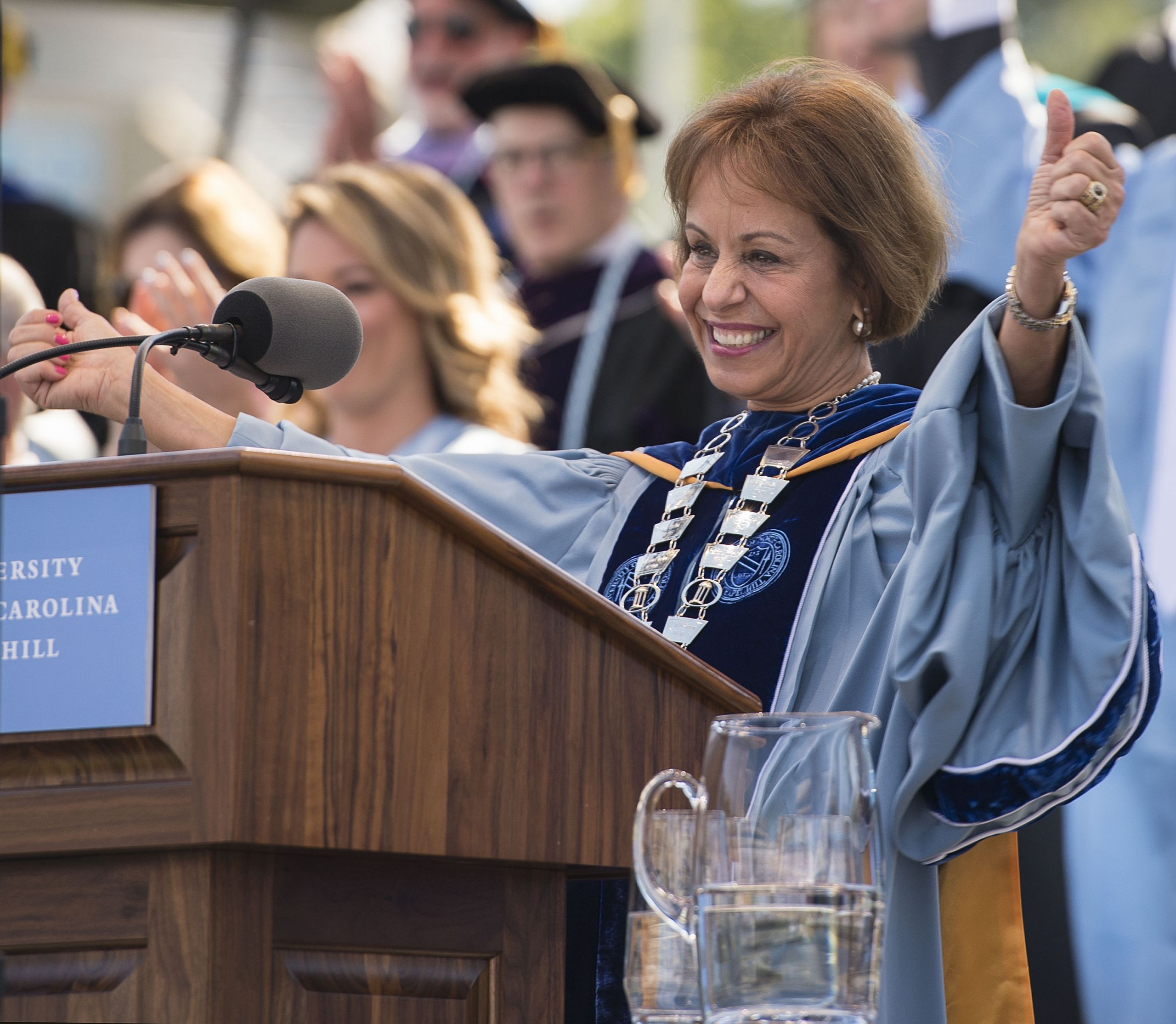 “You’ve been given opportunities that most people can only dream of ever having, and you can only repay that debt by taking seriously the belief that the investment was made in the public good,” she said.

During the ceremony, the University awarded honorary doctorates to three Carolina alumni: Fred N. Eshelman ’72, chairman of the Medicines Company and founder of Eshelman Ventures; Patricia D. Horoho ’82, the first female and nurse to command the Army’s Medical Command and serve as the Surgeon General of a military department; and Thomas Forrest Kelly ’64, the Morton B. Knafel Professor of music at Harvard University.

In her Commencement address, Baldwin reflected on her journalism career, which has included working for CNN for nearly a decade and having a “front row seat to the world’s biggest stories.”

While at CNN, Baldwin has covered major breaking news from the earthquake and tsunami in Japan and the death of Osama bin Laden. She was part of CNN’s Peabody-award winning team that covered the oil spill disaster in the Gulf. Baldwin worked with the network’s special investigations unit to complete her first hourlong documentary To Catch a Killer, which won a Silver World Medal for Best Investigative Report at the New York Festivals International Television & Film Award in 2012. She began her broadcasting career at WVIR in Charlottesville, Va., and served as a lead reporter for the 10 p.m. newscast at WTTG in Washington, D.C., before she joined CNN.

Her career path began two decades ago at Carolina.

“I loved my time here at Carolina,” she said. “This is where my commitment to journalism was ignited. People believed in me. That’s the force that takes you beyond what you think you can do to what you can do.”

As the graduates leave Chapel Hill and begin their own path, Baldwin urged the graduates to follow their instincts to reach their goals.

“People are full of great advice,” she said. “Professors, parents, friends mean well, but in the end, the person driving this thing called life is you. Listen to you. Spend time being alone. Learn your worth. Dream. And never forget where you came from.”