University Day, which begins at 11 a.m. in Memorial Hall, will highlight the ways service is integral to UNC. (Grant Halverson ’93)Service to the state of North Carolina will be the theme when Carolina celebrates... 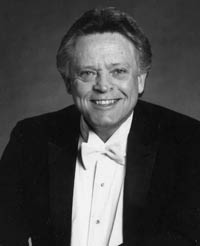 “Wing Singers: A Celebration in Song,” free to the public, will be at 2 p.m. in Hill Hall Auditorium.

The concert will feature performances by Wing, head of the music department‘s voice area, as well as several former UNC music students who studied under him. They include Grammy-nominated Metropolitan Opera mezzo-soprano Victoria Livengood ’83 and music department chair and director of opera Terry Rhodes ’78.

The performers will sing a wide array of music, including works by Beethoven, Mozart, Verdi, Ravel, Andrew Loyd Webber and Rodgers and Hammerstein. The performance will conclude with a choral ensemble directed by Wing.

“I have known Stafford since my undergraduate days in the 1970s,” Rhodes said. “His recitals were considered highlights of the concert season. Stafford has been an incredible friend and mentor to me through my 21 years on the faculty at Carolina, and I know that many of my colleagues feel likewise. The present vitality and strength of the voice area owe a huge debt to Stafford and his wisdom and guidance through the years.”

Wing came to UNC in 1969 direct from an active performing career. His work embraced a wide range of both classical and non-classical repertoire in concert, opera, musical theater, television, radio and recording.

He has toured throughout the U.S. and Canada with the Music Theater of Lincoln Center and has appeared in concerts in Austria, Germany, Switzerland, England, France and Italy. Wing recorded as a soloist for Vox with the Chamber Orchestra of the Vienna Symphony and with the Decca Gold Label with Amor Artis of New York.