Dartmouth Leader Chosen to Be Chancellor 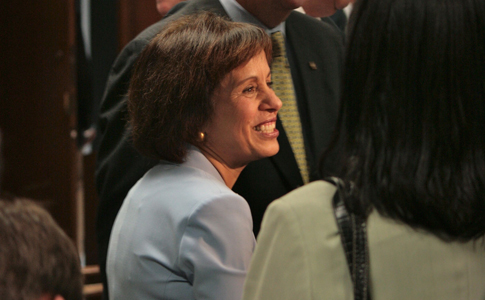 Carol Folt said she’d only whizzed by the Old Well in a car and was anxious to slow down, get out and take a drink. A TV cameraman, of course, said he’d be only too happy to meet her there for a photo op.

But Friday was not a day for Folt to slow down.

She was elected Carolina’s 11th chancellor in the early afternoon, and by 4 o’clock she’d spoken to two enthusiastic campus audiences and met briefly with the press. Folt, who has spent a 30-year career at Dartmouth College and now is its interim president, is the first woman in UNC’s top position. At a reception, several people were heard saying that this is an opportunity for a fresh start on a campus facing serious issues that still are under scrutiny. 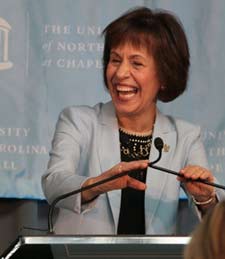 “This is the honor of a lifetime … a little bit of a dream state. This is an incredible opportunity to join a really wonderful, wonderful institution,” Folt told some 350 students, faculty and staff at the FedEx Global Education Building. She followed that quickly with a tribute to her predecessor, speaking of the chance to “build on all the strength and momentum” of the administration of Holden Thorp ’86.

Folt emerged from a nine-month search and was one of three candidates forwarded to UNC System President Thomas Ross ’75 (JD). The system Board of Governors gave her the nod after Ross explained that he had sought a leader who supported the liberal arts, would work to keep tuition low in accordance with the state constitution, was a proven fundraiser and would understand that academics are the first priority but recognize that athletics have an important role in campus life. She will come to work July 1.

Carolina’s first female CEO will lead a campus whose student body is 58 percent female. She has been provost, acting provost, dean of the Faculty of Arts & Sciences, associate dean of the Faculty for Interdisciplinary Programs, dean of graduate studies, and associate director of the interdisciplinary Superfund Basic Research Program at the small but well-known Ivy League school in Hanover, N.H.

“I know how much public education can change lives,” Folt told the BOG.

Sophomore Joshua Aristy, a representative in UNC’s Student Congress, noted the historic nature of the University’s having a female chancellor. “Absolutely love her, I’m looking forward to it,” Aristy said. “I hope because she did manage a university such as Dartmouth that it’ll help her deal with budget cuts here, and also efficiency and effectiveness.

“I think we will be meeting her. Especially because she’s new she’s going to want to get to know students, faculty, et cetera, especially from large student organizations.”

“I think the University is moving forward,” said Jerome Allen, a freshman, “and also implementing what it believes in these social justice ideals of having a female chancellor.” He said Folt’s prior experience as an administrator would help the University with the transition between chancellors, especially at a time when federal investigations over UNC’s handling of sexual assault have drawn the attention of the nation.

“She knows how to run a top-tier school — I think she can handle the heat that’s going to come her way with all the scandals.”

Folt arrived at Dartmouth in 1983 as a biological sciences teacher and eventually led research focused on the effects of dietary mercury and arsenic on aquatic life and human health, also conservation of Atlantic salmon and climate change. Ross described her as an “internationally recognized environmental scientist.”

According to Dartmouth, she was one of the original faculty members in its Women in Science Project, “a first of its kind program designed to address the under-representation of women in science, mathematics, and engineering.” She is a fellow of the American Association for the Advancement of Sciences.

Folt has been at the helm of Dartmouth for nine months since Jim Yong Kim left the school to head the World Bank; she had told Dartmouth’s board of trustees she would take the interim presidency only on the understanding that she was not a candidate for the permanent job.

Dartmouth is a private college in a rural setting, with 4,200 students who pay about $45,000 a year in tuition and fees. It is currently 10th in U.S. News & World Report’s rankings of all American universities.

In recommending her to the BOG, Ross said: “Over the past three decades, Carol Folt has accumulated a wealth of academic and leadership experience at one of the top 10 universities in America. At each step along the way, she has proven herself to be an engaged and effective leader who promotes openness and collaboration, strategic thinking and creative problem-solving, and an unwavering commitment to academic excellence and student success.

“She has also earned a reputation for great integrity, sound judgment, and the ability to face tough and complex challenges head-on. I am convinced that Carol Folt has the right mix of experience, expertise, skills and passion needed to be a truly great chancellor for UNC-Chapel Hill, and I am thrilled that she has agreed to join our leadership team.”

Her resume does not indicate experience with intercollegiate athletics. Dartmouth competes in football in the Division I-AA Ivy League, placing it considerably below the level of schools that sometimes experience conflicts between athletics and academics; it competes in Division I in men’s basketball and some other sports. The administrative positions she has held generally are not involved with athletics.

She was scheduled to join Athletics Director Bubba Cunningham at Carolina’s spring football game on Saturday after meeting with alumni leaders and attending the UNC Science Expo at the Morehead Planetarium and Science Center.

Folt is married to David R. Peart, a fellow professor of biological sciences at Dartmouth. They have two adult children, Noah, 27; and Tessa, 25.

She succeeds Thorp, who announced last fall he was stepping down amid a steady stream of bad news about a scandal that started in the football program and spread to a years-old case of academic fraud. Thorp planned to return to the chemistry faculty and subsequently took the provost’s job at Washington University in St. Louis.