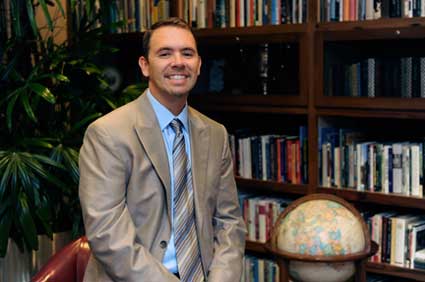 An educator who leads a successful group of charter schools in Atlanta has been honored by the GAA with a Distinguished Young Alumni Award.

David Jernigan ’00, executive director of KIPP schools in Atlanta, received the award at a banquet on Friday for bringing credit to the University through his achievements.

“The remarkable accomplishments of many of Carolina’s younger alumni such as David are truly inspiring,” said GAA President Douglas Dibbert ’70.

The Elizabeth City native attended the University on what is now the Morehead-Cain Scholarship and graduated in 2000 with a business degree. He became interested in teaching during a summer internship in Houston as part of the scholarship’s enrichment program. After graduating, he taught in Atlanta with Teach For America, a nonprofit organization that attracts high-achieving recent college graduates and places them in struggling schools.

Jernigan learned about the KIPP — or Knowledge Is Power Program — schools in Texas, and in 2003 he founded KIPP WAYS Academy in Atlanta and recruited elementary students from low-income neighborhoods with high dropout rates. Within five years, the school had been named the state’s No. 1 “No Excuses” school by the Georgia Public Policy Foundation.

“We believe your ZIP code does not have to define your destiny,” said Jernigan, who now oversees five KIPP schools.

Jernigan received the Outstanding Young Alumni Award from the Kenan-Flagler Business School in 2003.

As a student at UNC, Jernigan was president of the Residence Hall Association, which represents students’ housing interests and develops social, educational and service programs for residence halls. As president, he led the effort to allow female residents in Old East and Old West dorms.

Since 1989, the GAA’s Distinguished Young Alumni Awards have recognized alumni age 40 or younger whose accomplishments have brought credit to the University. Details about past recipients are available at alumni.unc.edu/awards.