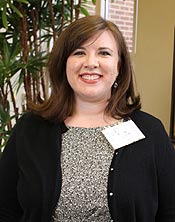 For many young people, study abroad is a route to a wider world. For Emily Williamson ’99, traveling on a Frances Phillips scholarship immediately after graduation showed her the way back home.

Some words she heard from former UNC System President William Friday ’48 had stuck with her ever since he spoke to one of her classes in her senior year. While she and her fellow students attended class that morning, he’d told them, a million North Carolinians worked at wages that kept them below the poverty level. Yet, through their taxes, those workers were supporting the system that provided the students with a college education.

Traveling in England and Ireland, Emily realized the economic development challenges she encountered were similar to those she’d seen growing up across from a hosiery mill in western North Carolina. She saw that she didn’t have to go to another country to make a contribution. She could take the considerable skills she’d developed as an undergraduate — both as a standout political science scholar and as an extraordinarily gracious and diplomatic student body vice resident — and go back to Burke County.

She did, teaching social studies and language arts in the very same school she once attended in Hildebran. Emily came to see that if her home region was to move forward out of the job losses and underemployment it was experiencing, its educational institutions had to lead the way. She decided she could do more to help if she knew more about the policies under which teachers teach.

When Emily came back to Carolina for a masters in public administration, she wrote an award-winning thesis on how community colleges can serve as incubators for small businesses. And when she again took her talents back home, it was as director of planning and research at Western Piedmont Community College in Morganton.

The job, says her longtime mentor and confidant, American studies Professor Rachel Willis, harnessed Emily’s understanding of campus decision making and planning, of the needs of Latino and Hmong immigrants, and of the community college’s role in retraining local workers.

Emily said at the time that the job let her do almost all her favorite things. Other passions — talking Carolina basketball, reading for pleasure, camping, hiking, and teaching at her church — she fit into her spare time.

Not that there was much of that. Quickly identified as a clear candidate for the college’s leadership development program, Emily rose to vice president for student development within three years, just seven years after she herself finished college. She also serves as executive director of Western Piedmont Foundation, which raises private support for the college.

As with everything Emily touches, she does both jobs well. She works with a team that has quadrupled the assets of the foundation. Rachel Willis said she has taken a really good community college and placed it among the best in the country in terms of meeting the needs of a county with high unemployment.

If that weren’t enough, for five years Emily has been a member of the Hildebran Town Council, where she is prized not just for such things as her understanding of block development grants but for her characteristic ability to see everybody’s perspective and help a diverse community move forward.

She does that in large part by fostering collaboration, something she models by serving on numerous boards that promote economic development and address various community needs. She is a past president of the Foothills Carolina Club, and she organized a bus trip to introduce young Hmong students to the UNC System. It should come as no surprise she was chosen Burke County Woman of the Year for 2009, the youngest person ever selected.

What Emily has accomplished, Rachel says, she has done through intelligence, hard work and “generous, diplomatic efforts, persistence in really integrating the economy and in getting people to communicate with each other.” And she’s done it with the backing of her extraordinarily supportive family — her mother is a nurse and her sister is a teacher in the same community.

While at Carolina, Emily helped work out some particularly thorny campus issues: the effort to turn the traditionally all-male Old East and Old West into co-ed residence halls; and the fair apportionment of campus parking spaces. Think for a moment about how contentious those particular challenges might be — and were. Her talent for listening patiently and for hitting on creative solutions and building consensus drew the admiration of many on campus. She was inducted into the Order of the Golden Fleece.

At Western Piedmont Community College, she is proud of the middle college she helped establish for high school juniors and seniors and of the recently opened collaborative site — housed in a rehabilitated textile mill — that will offer masters and bachelors degree programs.

Of very few can so much accomplishment, so much involvement in making the lives of the state’s citizens better, be checked off by the time of their 10th Carolina reunion. Emily Williamson clearly took President Friday’s admonition to heart.