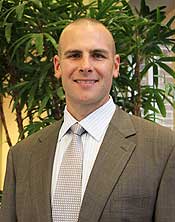 When Eric Montross ’94 stands his seven-foot frame in the seven-foot doorway of a child’s hospital room, the child tends to take notice. Inspired by his parents to make volunteer service a priority, Montross started visiting patients at the North Carolina Children’s Hospital after class when he was a student at UNC. He quickly realized that both his height and his membership on what became the 1993 national champion Tar Heels basketball team helped get children’s minds off whatever they were battling, at least for a little while. He stopped by to see children in the burn unit, children with cancer, children with myriad needs — and he found it a rewarding experience.

In his junior year, he became especially close to Jason Clark, a 15-year-old with leukemia, and started to visit him two or three times a week to play video games and talk sports. A huge fan of the Dallas Cowboys and ACC basketball, Jason gave Eric scouting reports for upcoming games and impressed him with his maturity and grace.

Near the end of Jason’s life, he and Eric talked about how the new Children’s Hospital then being designed could better meet young people’s needs. Jason came up with a list of suggestions, including a teen-friendly room where patients too old for the playroom could socialize, learn and relax.

Eric was a two-time All-American while playing for the Tar Heels and a leader on and off the court for Dean Smith’s second championship team. The Boston Celtics made him  the ninth pick overall in the 1994 NBA draft, and he made the rookie all-star game. He played for the Celtics and five other teams in a 10-year career.

Eric saved some of his best basketball moments for his littlest fans at Camp Blue Heaven, where for the last four years he has embraced and embodied the spirit of the GAA’s 14-year-old August retreat for alumni families. This year his family couldn’t be there, but Eric made the trip anyway, and campers have marveled at how good he is with the smallest children. Many of them will remember their first baskets, scored from way up near the rim in Eric’s outstretched hands.

Eric has served with distinction on the GAA board and the athletics department’s Athletic Council.

When he left for the NBA he did not forget about Jason Clark or his ideas. To help turn them into reality, Eric and his wife, Laura ’93, founded the Father’s Day Basketball Camp at Carolina where dads and their children hone their skills, have fun, and support the Children’s Hospital. In its 15 years, the camp has raised more than $800,000, funded the teen room, helped bring about other items on Jason’s wish list, and improved the surroundings of young patients in other ways.

Pediatrician Alan Stiles ’74, who chairs the Board of Visitors on which both Laura and Eric serve, says they continue to be strong advocates for the hospital. “Eric is approachable and gentle, and people generally take an immediate liking to him as a person,” Alan said. “His warm, giving personality helps us get through a lot of doorways and begin conversations.”

These days, the Montrosses are helping bring to fruition one of Alan Stiles’ dreams: a rooftop garden where nurses and families can safely take hospitalized children outdoors. Alan says Eric and Laura have been real partners in the planning of the project. “Eric has taken a very serious leadership role in what happens,” he said. “Selectively, he and Laura have thoughtfully put things into place and helped us build a leadership program we didn’t have at all 10 years ago. His help was absolutely invaluable in making that happen.”

Basketball camp funds also have supported a new short-stay unit for the hospital, as well as other projects that could never be paid for with clinical revenue. “Kids need more than adults do to take their minds off being sick,” says Crystal Hinson Miller, the hospital’s director of external affairs and communications. Thanks to the funds raised at the camp, artwork has replaced blank white walls in the corridors and patient rooms.

Eric’s work at the basketball camp raises awareness as well as money. “The neat thing is the message he tries to send to families about giving back,” Chrystal said. “He gives the example that you can give time, money, support and resources — you can give in a lot of different ways.”

Eric’s sincerity makes him a compelling speaker on behalf of the hospital. He himself characteristically deflects the credit.

“There’s such a high regard for athletics and basketball and UNC, that when you mix everything together, I’ve been put in a very fortunate position to make a very strong impact,” Eric said. And he is quick to mention the organizational contributions Laura has made since they married and started the camp.

The NCAA champion, All-American and NBA veteran has since 2006 served as a commentator on the Tar Heel Sports Network. His on-air teammate, Woody Durham ’63, says Eric brings to the broadcast booth the same drive and preparation he showed as a player. “As a former two-time All-American, he is very knowledgeable about the game,” Woody says. “He does a terrific job of analyzing what’s happening in a Carolina basketball game. I’m delighted to have him sitting beside me.”

One day a mother stopped Eric out of the blue in the grocery store. Her son was in the Children’s Hospital for treatment, she told him, and she said, “The paintings and murals you guys put in the treatment rooms really helped take his mind off what was happening.” That’s the kind of thing Jason Clark would have liked to see happen.