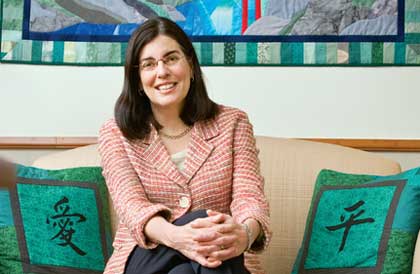 Etta Pisano, one of the brightest stars of UNC medical research and a rising figure in its administration, is leaving Carolina to become dean of the Medical University of South Carolina’s College of Medicine.

The announcement, made Wednesday, is subject to approval of the Charleston-based school’s trustees, scheduled for next week.

“I am thrilled to be joining such an outstanding institution as the dean,” Pisano told news media in South Carolina. “My family and I are very excited about this opportunity.”

Pisano was profiled in the current issue of the Carolina Alumni Review in a feature titled “A Brilliant Impatience.” It is available online to GAA members.

Pisano, who came to UNC in 1989, holds four position at UNC: Kenan Professor of radiology; vice dean for academic affairs in the medical school; director of the Biomedical Research Imaging Center; and director of the N.C. Translational and Clinical Studies Institute, an organization that helps facilitate the process of turning academic research into health care for the public.

Pisano is a pioneer in digital imaging to detect and study breast cancer and was the principal investigator of a landmark study of digital mammography published in the New England Journal of Medicine in 2005. The results of that study, one of the largest investigations of breast cancer screening, demonstrated advantages of digital mammography for the detection of cancers in younger women.

He said UNC has been recruiting for a new leader for biomedical imaging for some time. “Not to say her loss is not a big deal — it is.”

Pisano also has been active in the community, holding the presidency of the Chapel Hill-Carrboro City Schools’ PTA council while she was heading the breast imaging study.

“Dr. Pisano is one of the rising stars in academic medicine,” said David Cole, MUSC department of surgery chair and leader of the dean search committee. “She is a leader in every sense of the word and will help us build even greater excellence here in the years ahead.”

A graduate of Dartmouth College and the Duke University School of Medicine, Pisano trained in radiology at the Harvard-affiliated Beth-Israel Deaconess Medical Center. She has received numerous grants from the National Institutes of Health and serves as the lead investigator for the $61 million Clinical and Translational Science Award at Carolina. She has been recognized as one of the top 10 experts in women’s imaging and one of the 20 most influential people in radiology.

Earlier this year, Pisano was elected to the prestigious Institute of Medicine of the National Academy of Sciences.

She was made chief of breast imaging in her first year at UNC. “It was obvious what needed to be done: that breast imaging wasn’t good enough, that we needed to improve the tools,” she told the Review.

She did so first with digital mammography and the landmark Digital Mammographic Imaging Screening Trial and then with a new technology Pisano’s lab created, called diffraction enhanced imaging. She also was involved in testing for tomosynthesis, an imaging method that takes a pseudo 3-D image of the breast, showing it in sections that could more readily reveal tumors that hide behind tissue.

“She’s just an unusual blend of someone who understands imaging from the actual physics side all the way through not only patient care, but large-scale clinical research, understanding how imaging affects the population,” Shelley Earp ’70 (MD, ’72 MS), director of the Lineberger Comprehensive Cancer Center, said late last year. “Her scientific breadth is remarkable.”

Pisano also has worked on behalf of women in the academic workplace at UNC, helping lead efforts to stop the tenure track clock for major life events, including childbirth; and to improve salary gender equity. “That’s a path Etta has blazed,” Roper said, “and we want to make sure that work continues.”

“I’m impatient,” Pisano told the Review for the March/April story. “I’m really impatient. I look at my life and I say to myself, with luck, I have 30 more productive years, 30 years that I can contribute to society. What can I do next? What can I do that actually affects people and helps people? What can I do to help influence the world, help make things better?”

Pisano was selected from a national pool of candidates and is expected to succeed Jerry Reves, who is stepping down June 30 after nine years of service. Pisano will become the first woman to lead the MUSC College of Medicine and one of only about a dozen women who are deans of medical schools in the United States.