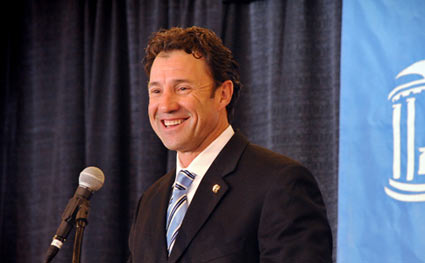 Houston rolled rather methodically through an undefeated season this fall, never scoring fewer than 35 points. They went into the Conference USA championship game confident that they would emerge shoulder to shoulder with the country’s elite.

That was before Larry Fedora’s Southern Mississippi team dismantled the Cougars 49-28 and stole the title from them. Fedora, who built his career as an offensive specialist before his four years as a head coach, will take over for Carolina next fall. The UNC trustees unanimously approved his appointment with no public discussion Friday morning.

Fedora will have a total annual compensation package of $1.73 million — a $350,000 salary, the opportunity to earn an additional $1.35 million in outside income (typically apparel revenue and media contracts) and a $30,000 expense account.

Fedora, 49, who was an Academic All-American as a college player, inherits a program that has not kept a head coach for longer than six years since Mack Brown left 15 years ago.

“Larry has a strong record both as the head coach at Southern Miss and for 18 years as a college assistant coach,” UNC Athletics Director Bubba Cunningham said. “Throughout his career his teams have been known for their exciting and highly productive offenses and aggressive defenses.”

Carolina in recent years has fielded good defensive teams, but offensively the Tar Heels have not been what one would call explosive.

Calling for a “new era” of Carolina football, Fedora told a news conference, “You better buckle your seatbelts and you better hold on because it’s going to be a wild ride.” He said his teams would be encouraged to play “smart, fast and physical.”

Fedora will coach the Conference USA champions in the Hawaii Bowl Dec. 24 against Nevada. Everett Withers will close out his year as Carolina’s interim head coach in the Independence Bowl against Missouri two days later.

A five-year contract would be the norm for a new coach, but Fedora’s is for seven years because UNC has told the NCAA it would serve a two-year probation for violations uncovered in an investigation that began in July 2010. The NCAA still has not issued its own ruling in the probe.

In addition, Fedora will have incentive bonuses for winning UNC’s division of the ACC and a conference championship and going to a BCS bowl, and for his players achieving certain graduation rates. He will get stay-put incentives as well — $100,000 if he remains at Carolina on Jan. 15, 2015, $200,000 the next year and another $50,000 for each year after that.

Fedora’s name came up in several coaching searches late in the season. He is believed to have interviewed for jobs at Texas A&M and Arizona State.

“Coach Fedora has a plan and a vision for the future of Carolina football that I strongly believe will make us successful on and off the field,” Cunningham said. “He has more than 20 years’ experience in college football, has tremendous enthusiasm, understands the academic and character values that are important to the University of North Carolina, is committed to fully developing the student-athletes who are under his charge and has the ability to excite both our fans and prospective student-athletes about the potential for great success here.”

Chancellor Holden Thorp ’86 said he thought Fedora would be a great fit for Carolina.

Fedora said Texas Coach Brown was among the people who advised him on the UNC job. He said Brown told him everything was in place in Chapel Hill for Carolina to be a winner. “That’s all I needed to hear,” he said.

At Southern Mississippi his teams posted 7-6 records his first two years, then were 8-5 in 2010. His overall record was 33-19. The Golden Eagles ran up a school record 6,123 yards of total offense this fall.

Fedora was a wide receiver at Austin College, a private liberal arts school near Dallas. He started his career as head coach at one of Texas’ powerhouse high schools. In 1991, he entered the college ranks at Baylor, where he coached tight ends, receivers and running backs. He later spent two years coaching passing and receivers at Air Force before becoming offensive coordinator at Middle Tennessee.

He was an offensive assistant at Florida for two years before becoming offensive coordinator there — just before Urban Meyer arrived at Gainesville. Fedora ran the offense at Oklahoma State for three years prior to his time at Southern Mississippi.