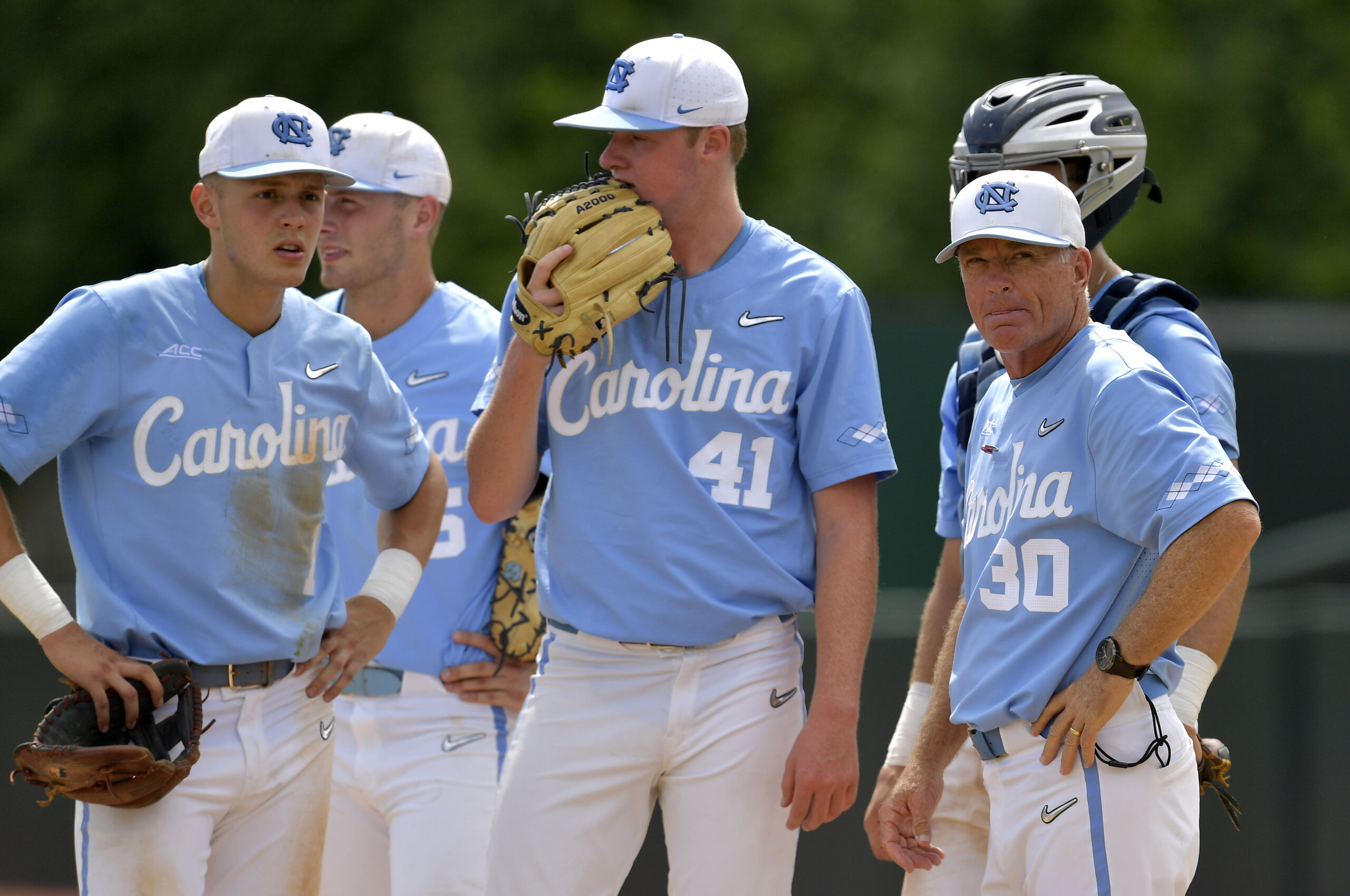 Mike Fox ’78 (’79 MAT), the winningest active coach in Division I baseball and the first to lead an Atlantic Coast Conference team to four consecutive College World Series, is retiring after 22 seasons at Carolina and 37 years as a collegiate head coach.

Scott Forbes, a 19-year veteran of Fox’s staff, will be only the fifth head coach of the Tar Heel baseball program since 1931.

“From playing in the College World Series as a Tar Heel senior, to winning a Division III national championship at N.C. Wesleyan, to leading Carolina to Omaha seven times as the Tar Heels’ head coach, Mike’s impact on college baseball has been legendary,” said Athletics Director Bubba Cunningham. “He has connected generations of players and fans to Carolina baseball, and his commitment to his students in and out of the dugout is highlighted by the scores of players who have returned to Chapel Hill after professional careers to earn their degrees.”

“Serving as the head baseball coach at my alma mater for the past 22 seasons has been one of the greatest blessings of my professional life,” he said. “I have been in love with The University of North Carolina since I was a young boy. To see my dream of becoming a Tar Heel student, player and coach is hard for me to even comprehend.

“I came to Chapel Hill in the fall of 1974 as a true walk-on, eventually made the JV baseball and basketball teams, played in the College World Series and returned as head coach for 22 unforgettable seasons. The experiences I have been so fortunate to live out and the relationships I have made as a player and coach have gone way beyond anything I could ever have imagined. Those experiences have exceeded even my dreams to this very day.”

Forbes will enter his 24th season as a college coach. He has been associate head coach, batting coach, pitching coach and recruiting coordinator.

“For nearly two decades I’ve had the privilege of pouring my heart and soul into Tar Heel baseball,” Forbes said. “I’m so proud of what we’ve accomplished with Coach Fox and incredibly excited about our future.”

The Sanford native began his coaching career with Fox in 1998 at N.C. Wesleyan. That followed a playing career at Middle Georgia College and Wesleyan in Rocky Mount. He was an assistant coach at UNC from 1999 to 2002 and at Winthrop from 2002 to 2005. He returned to Chapel Hill in 2006 as pitching coach, a position he held through 2016. The 2021 season will be his 16th consecutive year on the Tar Heel staff.

Collegiate Baseball named him the National Pitching Coach of the Year in 2008, and Baseball America named him one of the country’s top assistant coaches in 2018. Under Forbes’ direction, Carolina’s pitching staffs routinely finished in the top 50 in the country in earned run average, and UNC’s recruiting classes have consistently been among the nation’s best.

He worked with 33 pitchers who were selected in the Major League Baseball draft, who earned eight All-America and 21 All-ACC honors, including nine first-team All-ACC honors.

“The sign of a great leader also is building an outstanding staff,” Cunningham said. “Scott Forbes is a talented recruiter, a strong communicator and has been instrumental in developing multiple facets of the program during his 20 years at Carolina.”

As a collegiate player, Forbes hit .321 at Wesleyan from 1995 to 1997 and led the team to a pair of Dixie Conference titles and a fifth-place finish at the 1997 Division III world series. As a senior, he hit .387 with 61 RBI and 27 doubles, which set the Division III single-season record. He earned second-team all-region honors and was team MVP and MVP of the Dixie Conference Tournament.

Forbes earned a bachelor’s degree in business administration from Wesleyan in 1998.

Carolina averaged almost 45 wins per season prior to 2020 and posted five 50-win seasons under Fox, setting a school-record of 59 wins in 2013.

Major League Baseball teams drafted 105 of his players, including 15 first-round or supplemental round picks. Twenty-seven have played in the Major Leagues. Fox coached 37 first-team All-ACC selections, and his players earned 32 All-America honors.

Forty of Fox’s players came back to earn their degrees after playing professional baseball.

Fox spent 15 seasons as the head coach at N.C. Wesleyan College in Rocky Mount, where he led the Battling Bishops to 14 NCAA Tournament appearances, eight trips to the Division III College World Series and the 1989 national championship. His teams posted 15 consecutive top-20 finishes and won 11 Dixie Conference championships. His record of 539-141-4 at Wesleyan ranked second in winning percentage (.791) among all active Division III head coaches.

“Over the past five months I have come to realize more than ever the importance of family,” he said. “For the first time in almost 40 years, the time without coaching allowed me to truly experience family once again. Cheryl and I gained another grandbaby, and because our daughter and son-in-law live very close, we are able to experience the joy of children daily. I have also been able to spend more time with my son and his wife. It has been a blessing.”