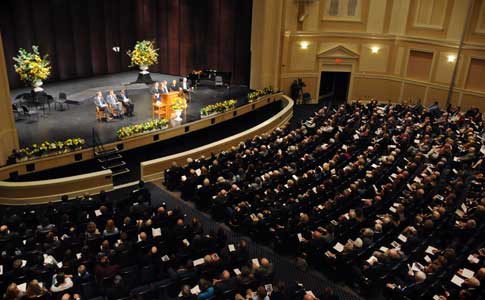 Thomas Ross ’75 (JD) said his was a life “as extraordinary as any our state has ever seen.” Beverly Perdue said, “He believed that for all of us — not some of us — education was that silver bullet that could change our lives — that every citizen of this state is guaranteed — he didn’t say should have, ought to have — he said we are guaranteed a quality, sound, basic education.”

The president of the UNC System and the governor joined others at a memorial service for William C. Friday ’48 (LLB) Wednesday, but none could speak as eloquently, as comfortably, as plainly about how public higher education gradually came to be a powerful engine for the betterment of North Carolina as could the honoree. None since perhaps Frank Porter Graham (class of 1909) was so involved in building and tuning it.

People from far off the Carolina campus filled the lower level of Memorial Hall to remember a life that began in rural Virginia, was shaped in the heart of North Carolina’s textile mill country, and grew to be one of the defining figures in the state’s emergence into more diversified opportunities for its citizens — ending after 92 years on the anniversary of the Chapel Hill campus’ beginning.

The hour-and-a-half service was mostly celebration. It was a hymn singing on a glorious Chapel Hill fall day. It included a stunning rendition of “Amazing Grace,” and ended with the joyous memories of Mary Friday Leadbetter ’78, who grew up with her sisters and their parents Ida and Bill, who were married for 70 years, in the big house at Franklin and Raleigh streets that she said was never locked.

Friday’s successor after 30 years as president of the multi-campus system, C.D. Spangler Jr. ’64, talked baseball. Friday played American Legion ball and once thought he could make a career of it. Once, Spangler said, during a conversation about baseball, Friday held out his hands.

“His left hand, which had been in a catcher’s mitt, was straight. His right hand was gnarled and crooked, and he said, ‘This hand got hit by foul balls and tipped balls and these fingers were jammed and broken, but you just had to keep on playing.’” The catcher, Spangler said, has the full view of the field and all the other players, is in on every play, directs the pitcher and even the outfielders.

“That’s what Bill Friday did. He saw the whole of North Carolina. He knew that education was the only way out of poverty.”

The damaged fingers also could be a metaphor for the difficult issues Friday faced down, and the perseverance he brought to them.

“President Friday faced many challenges during his tenure,” Ross said, “from desegregation, to the speaker ban controversy, to athletics scandals, to budget problems, to governance concerns. He resolved them all, through intellect, creativity, toughness, an unbending integrity, a true sense of justice, and a steady, gracious, stately demeanor.”

James Johnson, William R. Kenan Jr. Distinguished Professor of management, a close friend of the Fridays, said he was “the quintessential role model. … He could move from the suites to the streets without missing a beat. … He always gave you his undivided attention, and made you feel like the most important person in the world at that particular point.”

Hodding Carter, professor of leadership and public policy who was persuaded by Friday to join the UNC faculty, focused on Friday’s work on athletics reform. Friday was the founding co-chair of the Knight Foundation Commission on Intercollegiate Athletics, which placed the ultimate responsibility for athletics in the hands of college presidents instead of athletics directors, and chipped away at other issues.

“He envisioned its mission in the late 1980s … an attempt to begin to set right the incredible corruption and disruption of big-time athletics,” Carter said. “If, as cynics often remark, theirs was a quixotic mission, their targets were not windmills. They were at heart real, destructive dragons, and as recently as only yesterday, they had done sickening damage at institutions as diverse as Ohio State, Penn State, USC, Harvard, and Chapel Hill.

Television interviewer and news anchor Charlie Rose attempted to wrap up the tributes, saying, “He protected the University from political influence, and he understood how to not only protect the University but also how to meet them halfway in understanding common purpose.”

Leadbetter spoke on behalf of the family.

“In our household no one took themselves too seriously. In fact we had cocktail napkins that said, ‘Ida and What’s-His-Name?’”

Her father, she said, “embodies our state motto, ‘To Be Rather Than to Seem.’”

As the audience filed out into the sunshine, songs began ringing from the Bell Tower, among them “Halls of Montezuma,” “Shenandoah,” “Simple Gifts,” and “Hark the Sound.”

The crowd passed by the memorial to alumni who died in all wars. On the day the monument was dedicated in 2007, Bill Friday went to the microphone and reminded those gathered of what the word “statesman” means.

On that day he said:

“So what about us? What are we doing to make our democracy worthy of the sacrifice of these 684 noble spirits?

“How would each of us answer that question today? Are we moving more towards peace, not only among nations, but among citizens at home? Are we vigilant in securing freedom of speech, freedom of worship, freedom of the press, security of our homes and freedom of want among our people? Just how sensitive are we to human suffering in Darfur and to the oppression in the global community in which we now live? What are we doing to return civility to public life and to restoring the posture of our country as a moral, compassionate and caring nation?

“In our society, each of us is accountable and personally responsible through our own words and deeds as our conscience dictates; but we all know and we understand and we believe that our democracy, even though sometimes uneven and messy, still represents the best hope of humankind at home and throughout the world. We believe in freedom and liberty and are willing to make the ultimate sacrifice to make freedom and liberty secure for all people. The 684 lives we memorialize brought you and me to the special moment in independence that we so cherish. Here and now, you and I can do no less than rededicate our lives, our energy and our strength to make sure, very sure, that in our time, our generation will have done its part, done our very best to make this democracy worthy of the sacrifices of those we honor.”