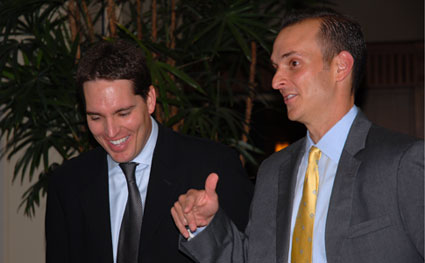 Jason Kilar ’93, left, CEO of Hulu.com, and Travis Tygart ’93, CEO of the U.S. Anti-Doping Agency, are the 2010 recipients of the GAA’s Distinguished Young Alumni Awards.

The leaders of a pioneering online TV show distributor and the agency that polices doping by Olympic athletes have been honored by the GAA with Distinguished Young Alumni Awards.

Jason Alan Kilar ’93, CEO of Hulu.com, and Travis Thompson Tygart ’93, CEO of the U.S. Anti-Doping Agency, received the awards at a banquet on Friday for bringing credit to the University through their achievements.

“The remarkable accomplishments of many of Carolina’s younger alumni such as Jason and Travis are truly inspiring,” said GAA President Douglas Dibbert ’70.

After graduating with a double major in journalism and mass communication and business administration, Kilar began his career with The Walt Disney Co., where he worked for Disney Design & Development. After earning his MBA from Harvard Business School in 1997, he spent nearly a decade at Amazon.com, where he served in a variety of key leadership roles, including vice president and general manager of Amazon’s North American media businesses, overseeing its books, music, video and DVD categories. The Seattle resident later served as senior vice president for its worldwide application software.

Kilar helped lead the creation of Hulu in 2007. The Los Angeles-based website — a joint venture of News Corp., NBC Universal, the Walt Disney Co. and Providence Equity Partners — offers thousands of full TV shows and movies for free. As Hulu’s chief, Kilar has been included by Fortune and Rolling Stone magazines on their “40 Under 40” lists of top young business and media leaders, and in its October issue, Vanity Fair placed him among the top 100 of what it called “The New Establishment.”

Tygart, CEO of the U.S. Anti-Doping Agency, headquartered in Colorado Springs, Colo., oversees a nonprofit organization that investigates Olympic athletes suspected of using performance-enhancing drugs; reaches out to young athletes and elite amateurs to educate them on making healthy, ethical choices; and funds research related to deterring drug use in sports. After receiving a degree in philosophy at UNC, Tygart earned a law degree from Southern Methodist University in 1999 and became outside counsel to the agency when it was formed in 2000, shortly after the Sydney Olympics. He became USADA’s director of legal affairs in 2002 and CEO in 2007.

Besides high-profile investigations of athletes and organizations, such as the BALCO laboratory in San Francisco, the Jacksonville, Fla., native has testified before Congress several times about broader issues related to illegal use of performance-enhancing drugs and the pressures on those who want to compete fairly without jeopardizing their health or compromising their integrity. His testimony before the Senate Foreign Relations Committee in 2008 helped achieve Senate ratification of the UNESCO anti-doping convention, an international treaty against doping in sports. Tygart returns to UNC at least once a year to speak to journalism, law and philosophy students on ethics issues.

Since 1989, the GAA’s Distinguished Young Alumni Awards have recognized alumni aged 40 or younger whose accomplishments have brought credit to the University.