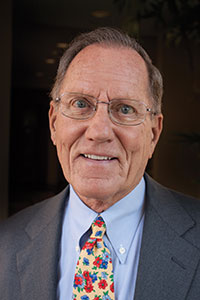 Vaughn D. Bryson ’60 of Vero Beach, Fla., was installed as chair of the GAA Board of Directors at the annual Alumni Luncheon on Saturday, succeeding Robyn Hadley ’85 of St. Louis. Dr. Dan A. Myers ’71 (AB, ’75 MD) of Kinston assumed office as chair-elect.

Bryson, the retired president and CEO of Eli Lilly, has previously served on the GAA board as first vice chair and as an Athletic Council representative. As a student at UNC, he was on the varsity baseball team. His contributions to Carolina include serving on the steering committee for the Carolina First Campaign, on the dean’s advisory committee for UNC’s School of Pharmacy and as co-chair of the Boshamer Stadium renovation committee. He and his wife, Nancy Faison Bryson ’60, were recipients of the GAA’s Distinguished Service Medal in 2004, and he received the Board of Trustees’ William Richardson Davie Award in 2008. The Brysons have helped fund UNC medical school research into an abnormality that leads to a group of disorders known as MPS, and they helped establish a clinical genetics research center at the medical school. The latter is expected to be instrumental in creating one of the nation’s leading centers for medical genetics. Bryson was chosen last year as chair-elect by the GAA board.

Myers, president of Sonorex Inc., has served on the GAA board since 2007, both as an N.C. district director and as first vice chair. As a student at UNC, he was a Morehead Scholar, graduated Phi Beta Kappa and was a member of Alpha Epsilon Delta, Alpha Omega Alpha and Alpha Phi Omega. His contributions to Carolina include serving on the UNC Board of Visitors.

As a result of elections decided by GAA members, Hadley, who becomes immediate past chair, announced that Joel M. “Joe” Brown ’69 of Winston-Salem is the board’s new first vice chair and James E. “Jim” Delany ’70 (AB, ’73 JD) of Hinsdale, Ill., is the new second vice chair.

Brown, executive vice president at BB&T, previously served on the board as an Athletic Council representative (2003-06). As a student at UNC, he was co-captain of the men’s basketball team, playing on three teams that won ACC and Eastern Regional championships and reached three Final Fours. He also received the Foy Roberson Award for most inspirational player.

Delany, commissioner of the Big Ten Conference, is a former vice president and treasurer of USA Basketball. He has served on the board as an out-of-state district director (2005-08) and, since 2011, as an at-large director. As a student, he was a member of UNC’s freshman and varsity men’s basketball teams, was a varsity tri-captain, recipient of the Foy Roberson Award and a member of Tau Epsilon Phi.

Margaret Highsmith Dickson ’71 of Fayetteville, to the district for Anson, Brunswick, Chatham, Columbus, Cumberland, Hoke, Lee, Moore, New Hanover, Richmond, Robeson, Scotland, Stanly and Montgomery counties. Dickson is a columnist with Up and Coming Weekly, a retired secretary-treasurer with Cape Fear Broadcasting Co. and a former member of the N.C. Senate and N.C. House of Representatives. As a student, she received the Thomas Wolfe Student Award for creative writing; was active in student government affairs; worked as a graduate assistant in the department of radio, TV and motion pictures; and was a member of Chi Omega. She is a former chair of the nominating committee for the UNC System Board of Governors, a member of the UNC Board of Visitors and received a first-place award for editorial writing from The Associated Press. Currently, she is chair of Lillian’s List Action Fund and a councilor with the N.C. State Bar, serves on the executive committee of the Women’s Forum of North Carolina and is secretary of the N.C. Civil War History Center Foundation.

Linda Dew Garrou ’67 (MAT) of Winston-Salem, to the district for Avery, Buncombe, Cherokee, Clay, Forsyth, Graham, Haywood, Henderson, Jackson, Macon, Madison, McDowell, Mitchell, Polk, Swain, Transylvania, Watauga, Wilkes, Yadkin and Yancey counties. Garrou is a retired N.C. senator and a former guardian ad litem administrator and high school teacher. She received the Board of Trustees’ William Richardson Davie Award in 2010 and is a former member of the UNC Board of Visitors. Her other awards include Duke Power’s Citizen and Service Award, and she was the founding chair of Action for Children. She also is a former member of the Governor’s Advocacy Council for Children and Youth; was deputy minority leader in the N.C. Senate; was co-chair of the N.C. Senate’s appropriations/base committee and of the N.C. Senate pensions, retirement and aging committee; and has been a member of Big Brother/Big Sister, of the Commission on the Family, of Leadership Winston-Salem and of the Winston-Salem Foundation.

Bill Helms ’68 (BSBA, ’72 JD) of Monroe, to the district for Alexander, Burke, Caldwell, Cabarrus, Catawba, Cleveland, Gaston, Iredell, Lincoln, Rowan, Rutherford and Union counties. Helms is a retired N.C. Superior Court judge who works as a statewide consultant for mediation and arbitration matters. At Carolina, he was a member of Phi Kappa Sigma. He is a former member of Wingate University’s board of directors, is a past chair of the board of directors of Union County Halfway House and is a former member of the board of directors for Union County Habitat for Humanity. He is a member of the Rams Club.

Stephen E. “Steve” Previs ’72 of London, to the district for international areas outside of the U.S. and for Maine, Massachusetts, New Hampshire, Pennsylvania, Rhode Island and Vermont. Previs is a sales/trader with MINT Partners, a former director with Knight Equity Markets International and a retired pro basketball player with the Carolina Cougars. At UNC, he was co-captain of the men’s basketball team (1972), received the Frank Porter Graham Award and the Jim Tatum Memorial Award, earned First Team Academic All-America honors and was a member of the Order of the Grail, Order of the Golden Fleece and Order of the Old Well.

James C. “Jim” Roberts Jr. ’77 of New York, to the district for Connecticut, New Jersey and New York. Roberts is executive editor/chief content officer with Mashable.com. He is a former executive editor of Reuters Digital at Thomson Reuters and assistant managing editor of The New York Times. At UNC, he was a member of Order of the Golden Fleece, news editor at The Daily Tar Heel and managing editor of the Yackety Yack. He graduated Phi Beta Kappa. He is a member of the board of directors of the Online News Association and a board member of the Global Editors Network.

Dr. Michael L. Zollicoffer ’85 (MD) of Baltimore, to the district for Delaware, District of Columbia, Kentucky, Maryland, Ohio and West Virginia. Zollicoffer, a pediatrician, is owner and CEO of LifeCarePlus Urgent Care Center. At UNC, he received the McNider Award (1980), was president of the Whitehead Medical Society (the School of Medicine’s student government), was co-president of his second-year class in the medical school and was founder of the Xi Gamma chapter of Phi Beta Sigma. He is a former president of the Zeta Upsilon chapter of the Phi Beta Sigma, and he received the Harvey E. Beech Outstanding Alumni Award in 2010, the Community Leadership Award from the University of Maryland, Baltimore County and the Harlow Fullwood Community Leadership Award. He is the current chair of the UNC Board of Visitors and a member of Metro Delta Head Start health advisory board, of the UNC campaign planning board and of the board for the Alumni Committee on Racial and Ethnic Diversity.Appointed as at-large directors for three-year terms are:

Richard W. “Rick” Gunn Jr. ’80 of Burlington. Gunn is a member of the N.C. Senate, representing Alamance and Randolph counties, and owns ERA Gunn Realty. At UNC, he was a member of Beta Theta Pi. In 2012, he began a four-year term on the UNC Board of Visitors. He is a past president of the Burlington-Alamance County Association of Realtors, the Alamance Business Club and the Burlington Downtown Corp. A former vice chair of the Alamance Chamber of Commerce, he also served on the board of the Salvation Army Boys and Girls Club, as budget review chair for the United Way of Alamance County and as president of the YMCA of Alamance County.

Tara LaVerne Patterson Hammons ’93 of Bethlehem, Pa. Hammons is an employment law attorney. At UNC, she was a member of the Black Student Movement and the BSM Gospel Choir; participated in study abroad, going to Ghana and Togo; and was a tutor/mentor at Carrboro Elementary School. She is a former member of the UNC Board of Visitors, a past president of the Howard University School of Law Alumni Association; a former executive board member with the Philadelphia Barristers Association; and a former member of the West Philadelphia YMCA’s board of directors. She volunteers with the Carolina Alumni Admissions Program and is a member of the advisory council for United Way for Greater Lehigh Valley Community Partners for School Success Program, a member of Strive Inc. Youth Leadership Institute’s board of directors and a member of the Strong Foundations Charter School’s board of trustees.

New director elected to a three-year term on UNC’s Athletic Council is:

Heather O’Reilly Werry ’09 of Chapel Hill. Werry, a professional athlete, is a member of the U.S. Women’s National Soccer Team. At UNC, she was on the varsity women’s soccer team, which was a two-time national champion, and she was co-captain of the 2006 national championship team. Her jersey was retired at UNC in 2008. She also was a member of Order of the Golden Fleece. She is a three-time Olympic gold medalist, a two-time World Cup medalist and a former ambassador with USOC Team for Tomorrow, making more than 190 appearances for the U.S. on the USA Women’s National Soccer team. She currently serves as an ambassador with Right to Play and is founder of the Heather O’Reilly Soccer Academy, a member of America Scores-LA’s board and a member of Athletes for Hope.

Student representatives joining the board as ex officio members for 2014-15 are:

Dr. Joy Justus Renner ’80 (BSRS, ’92 MA) of Graham was appointed as the faculty representative on the board. Renner is a professor and director of the medical school’s division of radiologic science and has served as chair of UNC’s Faculty Athletics Committee.Wade M. Smith ’60 (AB, ’63 LLBJD) of Raleigh has been named counsel to the board. Smith is a former member of the board and served as its chair in 1990. Anthony Eden Rand ’61 (AB, ’64 LLBJD) of Fayetteville, treasurer, and Dwight M. “Davy” Davidson III ’77, assistant treasurer, were reappointed to their posts.More online…