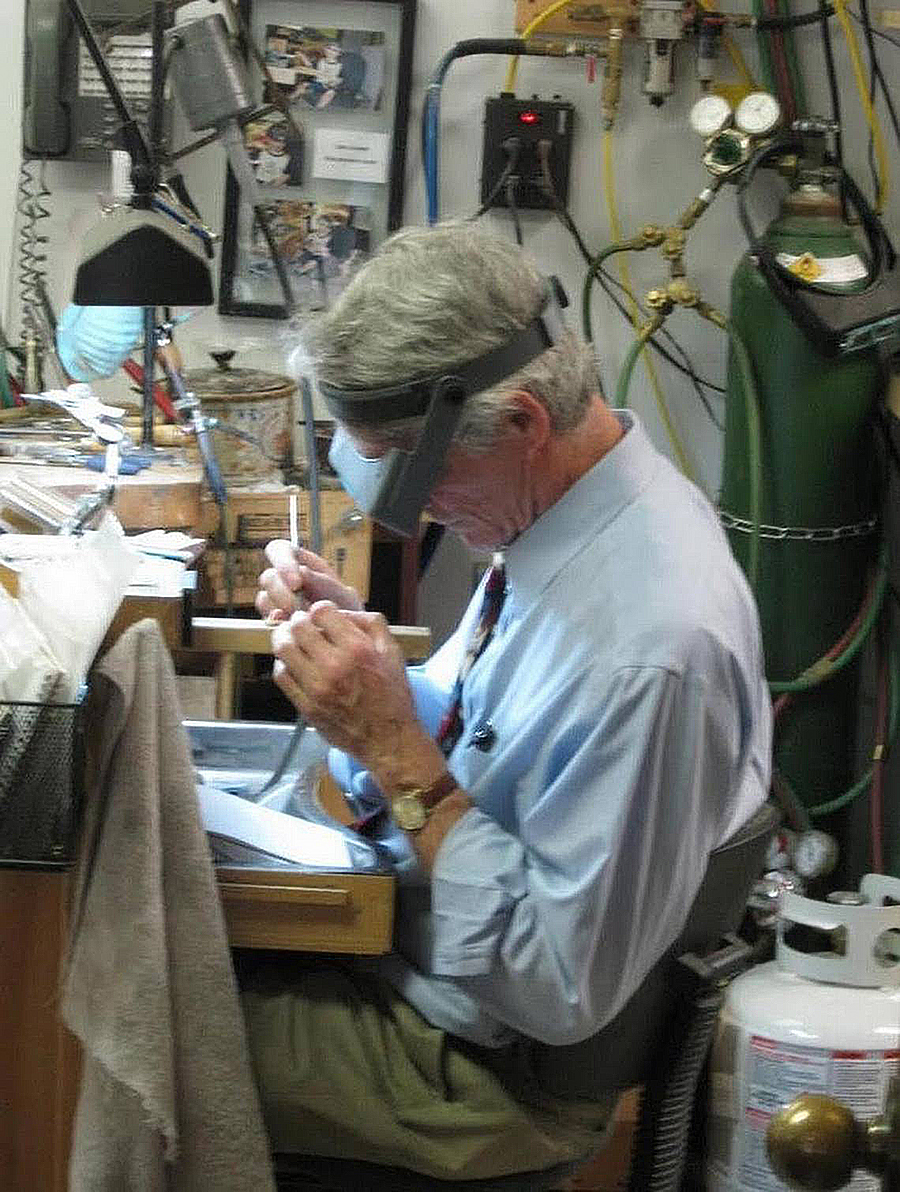 Berkeley Grimball Jr. ’73 will close Grimball Jewelers after more than three decades in business, rather than face finding another location and re-establishing the business. (Herald-Sun photo)

It’s usually a good time for jewelers during the end-of-the year holidays, with seasonally inspired sparkly gifts in demand. But it is a bittersweet season for Berkeley Grimball Jr. ’73. On Dec. 28, he will close Grimball Jewelers after more than three decades in business.

Regency Centers, the Florida-based company that owns Village Plaza on South Elliott Road where the shop is located, has decided not to renew Grimball’s lease. Regency is among developers revamping shopping centers in that eastern area of Chapel Hill, bringing in fast-casual restaurants, modern apartments and entertainment options, change that is forcing many of the longtime shops out.

The jeweler reluctantly decided to close the store, which has been in the shopping center for more than half of its 33 years, rather than face finding another location and re-establishing the business, as he’s done twice before. Grimball said he was willing to pay more rent just to stay put.

“It has been the most difficult decision of my life, each option with huge upsides and downsides,” he wrote in a Facebook post. “I would go to bed having decided on one and wake up in the middle of the night deciding on the other, often paralyzed with fear and anxiety over making the wrong decision.

“But I have decided to close.”

At the store’s going-out-of-business sale, which started mid-November, newcomers drawn by the promise of deep discounts mingled with longtime patrons stopping in to thank Grimball and offer their condolences.

The English major started making jewelry while a student at UNC. He credits college roommate Pablo Lancella ’72 with getting him interested in handmade jewelry after learning to make simple wire pieces during a trip to Amsterdam. Grimball began creating pieces from silver wire, and after traveling to Africa and Europe in search of offbeat materials — such as bits of bleached bone from the beaches of Morocco — he opened a small shop in Carr Mill Mall in 1985.

Two years later, the shop moved to West Franklin Street and expanded its inventory to include contemporary designs and estate jewelry. When business continued to grow faster than downtown parking spaces, Grimball moved to Village Plaza in 2000. The years just before the economy’s slide last decade, he said, were his best ever.

While his merchandise came over time to include more conventional pieces, Grimball never lost his love for odd things, handmade jewelry and semiprecious stones, especially agates. There was that time, on a trip to Tucson, Ariz., when he spotted a sculpture of a ram made of aragonite. The loyal Tar Heel brought it back to Chapel Hill and ended up donating it to The Carolina Inn. Visitors can see it still on a back wall in the lobby.

“I love everything about the jewelry business (except the amount of time spent on all fours looking for some tiny thing),” Grimball wrote in his Facebook post to patrons. “Creating and providing objects of intense and lasting beauty to people at joyous moments in their lives requires a unique set of skills and abilities encompassing art, science, and an understanding of the human spirit. It has never ceased to be fascinating and gratifying.”

Grimball said he might continue to sell jewelry from home, and he has no intention of quitting his other great love, the band Too Much Fun. For the past 25 years, he and a group of friends have performed roots rock and rhythm and blues at weddings, fundraising events and nightspots across the Triangle, with Grimball on saxophone, vocals and guitar.

“The universe, Fate, my guardian angels, or whomever it is that sometimes seems to pull the invisible strings of our lives, has conspired to convince me to leap into the void, scary as it is, and see what kind of next chapter I can create with what vitality and mobility remains to me,” Grimball posted.

“It will certainly involve playing a lot more music.”