Heels Falter in Tournament, Look Ahead to Regionals

The Carolina baseball team took the short drive home from Durham with a disappointing 1-2 record in the ACC Tournament last weekend.

The two losses couldn’t have been any different, but the end result was the same: many Carolina blue clad fans hanging their heads walking out of Durham Bulls Athletic Park. 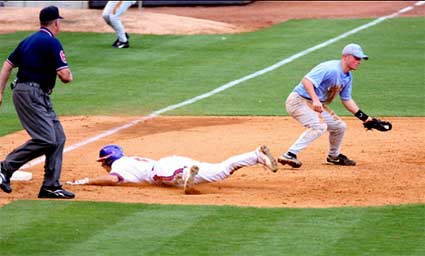 The Heels lost 4-3 in extra-innings to Clemson in the ACC Tournament. (Photo by Joe Bray ’72)

But all is not lost for the Tar Heels: They were awarded the No.4 national seed in the NCAA tournament and will host one of 16 regional tournaments at Boshamer Stadium this weekend.

Adam Warren went 8 1/3 innings on the mound, giving up three runs and striking out seven.

The only offense the Tar Heels managed Friday against Virginia was a home run from freshman standout Levi Michael, and they lost to the Cavaliers 11-1 in eight innings after the league’s postseason 10-run rule was invoked.

The Cavaliers scored 10 runs in the third and starter Alex White only lasted 2 1/3 innings. The offense managed only five hits against ACC Freshman of the Year Danny Hultzen. Michael was a bright spot, going 2-3 to extend his hitting streak to five games.

Greg Holt pitched 2 1/3 scoreless innings in relief, but the damage already had been done.

The Tar Heels’ fate was not entirely in their own hands going into Saturday’s game against Clemson. Carolina had to win and have Duke win its game against Virginia to move on to the championship game.

The Heels’ Ben Bunting was the hero in the top of the ninth inning, tying the game at 3 with an RBI single.

After 1½ scoreless innings, Clemson loaded the bases in the bottom of the 11th with two outs. Saturday’s record 6,956 fans were on their feet and Wilson Boyd’s walkoff single took the air out of the mostly hometown crowd.

Virginia went on to win the next game, and beat Florida State for the championship.

UNC fell in the ACC Tournament last year, too, and went on to reach the College World Series for the third consecutive year.

UNC’s regional this weekend includes Dartmouth, Coastal Carolina and Kansas. Coastal and Kansas will play at 2 p.m. Friday and Carolina will play Dartmouth at 6 p.m.

The losers will play at 1 p.m. Saturday and the winners at 5.