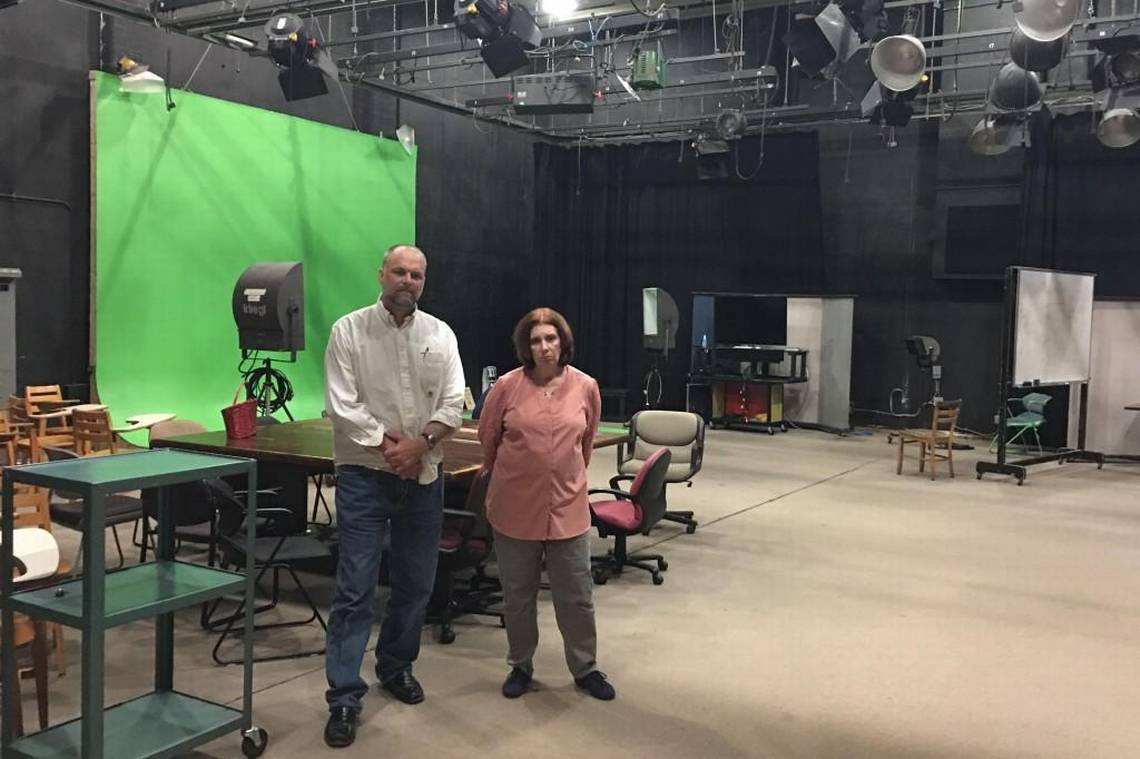 Early this year, Cori Dauber ’84 (MA), a professor of communication, and Mark Robinson ’91 (’01 MA), a lecturer and director of the department’s multimedia lab, recruited 24 students to create media campaigns to counter messages of radical groups in the U.S. In June, they learned the federal grant supporting the project had been canceled. (Photo by Jay Price ’84/WUNC)

UNC faculty members who applied for — and won — an $867,000 Department of Homeland Security grant to develop communication strategies to counter recruitment efforts of violent extremist groups are mystified that the award was canceled.

Under the Obama administration and announced before inauguration day in January, the department awarded 38 grants, mostly to law enforcement groups and municipalities; only three were awarded to universities. UNC was to get the largest of all of them. In June, 12 of the grants were pulled; UNC’s Office of Research Development received an email that said the criteria had been changed.

Cori Dauber ’84 (MA), a professor of communication, and Mark Robinson ’91 (’01 MA), a lecturer and director of the department’s multimedia lab, had recruited 24 students to create media campaigns to counter messages of radical groups in the U.S. Along the way, they went through a petition campaign by the University’s Muslim Students Association calling for the University to reject the grant, saying the language of the grant proposal disproportionately targeted Islamic extremism.

Dauber, who specializes in rhetoric and argument, explained that there is a fear in the Muslim community that projects such as the ones the grants supported could be fronts for anti-Muslim surveillance. “The objection was based primarily on a rumor,” Robinson added.

Dauber and Robinson believed college students were among the best equipped to create counter-extremism media because they are the demographic that hate groups target for recruitment. She noted how jihadists sometimes mimic scenarios from popular video games and superhero movies. “If we don’t have a 20-year-old kid look at the video, I feel like we’re missing out,” she said.

The researchers had worked with 12 students in a “Maymester” course — one of a set of intensive three-week courses offered in the spring — in 2016 to produce counter-jihadist media. Impressed with the students’ work, they applied for the grant that September.

Their grant proposal said the students’ work also would cover white supremacist activity, which they believed was an important component for a program named “Countering Violent Extremism.”

On Feb. 1, the Reuters news agency, citing unnamed sources, reported that the Trump administration was eliminating white supremacist groups from the scope of the $10 million grant program. Reuters said the program’s name would be changed to Countering Islamic Extremism or Countering Radical Islamic Extremism.

As of June 23, when Homeland Security announced the smaller number of grants, the name had not been changed.

“Reuters was very wrong, but we bore the brunt of it,” Dauber said.

She said in July that she still doesn’t know why UNC was denied the grant. She and Robinson had been told the money would start coming on March 1; when it didn’t, they were assured it was coming soon. Besides hiring students and reserving studio time, they had spent some preparatory money out of their own pockets. After the June announcement, Dauber said, Washington stopped answering the phone. The Homeland Security news release did not mention the shortening of the recipients’ list.

In June, public radio station WUNC reported that a Homeland Security spokesperson had told it that grant winners were not scratched from the program because they planned to target the messages of white supremacists. The spokesperson said, according to the report, “The program has not been altered to focus on any one type of violent extremism. Of the 26 projects announced today, 16 projects are equipped to combat all forms of violent extremism, including white supremacist violent extremism. Ten focus on ISIS and/or other foreign terrorist organization recruitment and radicalization of Americans.”

The students would have been paid to work on the project — it was not a class. “After spending so much energy, it’s a body blow,” Robinson said.

“The worst of the whole thing was having to contact the kids who hadn’t graduated” and would have been able to work on the project for most of the new school year, Dauber added.