Weeks after the trees have flowered, gone to light greens and filled out in the North Carolina flatlands, spring comes gradually and tentatively to the mountains. The traffic builds on the Blue Ridge Parkway and on the winding road up to the Mile High Swinging Bridge, and the return of the birds, the deer and even the elusive black bear sets the table for a nature watcher’s feast. 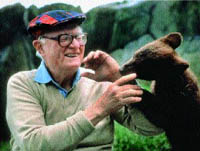 No one ever articulated the simple allure of the rugged Appalachian hills better than Hugh Morton ’43, who took perhaps the least likely-to-succeed of his grandfather’s and father’s land holdings near Linville and fashioned an everyman’s resort out of the natural resources of Grandfather Mountain. Morton, who was 85, died June 1 after a six-month battle with cancer, as the Catawba rhododendron blooms hailed the start of another high season in the mountains.

He divided his time as the state’s premier tourism pitchman and a tireless advocate for preservation – notably of the parkway environment and the mountain vistas, the Cape Hatteras lighthouse, the USS North Carolina battleship memorial. At the same time, he drew criticism as a land developer. Morton would have been well known for his pictures alone. His patience made him an outstanding nature photographer, and he started documenting the Chapel Hill campus during World War II; his name is on the credit line for many of the iconic landscape and sports photos of Carolina, published over and over again.

In his various campaigns, Morton bumped elbows with the state’s most powerful people. He was equally tight with the tame bears that roamed his preserve at Grandfather, the progeny of the mountain’s imported mascot, Mildred.

Morton was recognized by the University with a Distinguished Alumnus Award in 1997. (Photo by Dan Sears ’74)

“Hugh Morton was one of those outstanding individuals characterized by Tom Brokaw as the greatest generation of Americans,” Friday said. “I do not know of a major civic enterprise of which he was not a part, usually in a leadership role.

“He was a profound environmentalist who understood the beauty of the place. The University had no better disciple.” Friday said he’d decided that when young people ask him for examples of public servants, “I’ll point to Hugh Morton.”

As a conservationist, the Wilmington native often cameback down from the mountain. In one of his last public acts, he wrote a letter to the Raleigh News & Observer in March to explain in detail the work of a man who developed an alternative method of restoring sand to eroded beaches. Morton had taken 40 North Carolinians to Lake Michigan to see the system, and he recommended the state take a hard look at adopting it.

Morton and his camera were at all but a couple of ACC basketball tournaments over the past 50 years.

His family is in the process of donating his collection of photographs to the University. Four van loads of pictures were delivered to the North Carolina Collection in Wilson Library this spring.

Morton’s maternal grandfather, Hugh MacRae, took family money and bought 16,000 acres that would become the town of Linville and surrounding area, to attract moneyed vacationers and second-home seekers to the beauty and cool summers of the mountains. His father continued the work and built the first crude road up Grandfather Mountain. Morton’s sister Agnes developed the Grandfather Mountain Golf and Country Club in the valley, but, drawn to the wilder lands by his hikes as a youth, it was the mountain that Morton wanted.

He built a swinging bridge between two peaks and adopted Mildred and her cubs – the bridge was a mile above sea level and the bears were captive, but Morton created the illusion that tourists could see a mile straight down and that Mildred might playfully raid their picnic baskets. Eventually he built a superb series of trails to attract those who didn’t want to see it from the car. Late in life, he was still going up the mountain every day, still prodding TV stations in the flatlands with pictures and video clips he knew would entice day-trippers to Grandfather.

He often said, “I’m a good photographer because I know how to take my pictures to the mailbox.”

In fall 1939, as a UNC freshman, Morton took the famous picture of Frank Porter Graham ’09 pitching horseshoes. It got him noticed, and he was preparing to be editor of the Yackety Yack in 1942 when instead he volunteered for war service intent on being a combat photographer. On the same day that he was seriously wounded in a booby-trap explosion at Luzon while shooting newsreel footage, Morton learned of his father’s sudden death. Morton’s uncle Nelson MacRae, his father and his grandfather Hugh, the three key figures in the early development of Grandfather, all died within the same decade. In 1945, Hugh Morton returned to the mountains to run the business.

His preservation battles have spanned the state.

He led the grassroots campaign to bring the mothballed USS North Carolina to the state as a memorial and a tourist attraction for Wilmington. No state had ever taken possession of a battleship before the ship was pushed into the Cape Fear River mud in 1961.

He believed the Cape Hatteras light was in a class with the Golden Gate Bridge and the Statue of Liberty, and he marshaled political and business interests to save it from the encroaching sea. Although it was preserved, Morton remained bitterly disappointed that it was moved inland.

After a large 10-story condominium building was erected on a ridgetop within Grandfather’s view, he sparked the effort that got the N.C. General Assembly to outlaw such developments.

Probably his biggest fight was with the U.S. Park Service over its plan to close the last gap in the Blue Ridge Parkway by running it along a route too high on Grandfather to suit Morton. Morton campaigned against the plan, telling North Carolinians that the park service was trying to ruin his mountain by going over the top of it – an exaggeration but an effective one. Morton suggested a route following the highway his grandfather had built on the low side of the mountain, and he gave the state almost 500 acres for it. They compromised on a middle route, for which a spectacular viaduct was built – the Linn Cove Viaduct only boosted the visitation value.

He also helped quash a plan to make parts of the parkway a toll road. Later, he worked to preserve the views from the parkway from housing development. Morton was a developer himself, and he tangled with his Avery County neighbors over a 900-acre tract at the foot of Grandfather on which he built a shopping center. To the criticism, he would counter that he had put hundreds of acres on the mountain into permanent preservation trust.

In fall 2003, UNC Press published Hugh Morton’s North Carolina, a coffee table book of his pictures. A second volume is due out from UNC Press this fall. Photos from the book accompanied an in-depth profile of Morton published in the Carolina Alumni Review in September/October 2003. The article is available online to GAA members.

“Carolina has lost a dear friend, and North Carolina has lost a true state treasure. Hugh Morton’s contributions are broad and deep – from his tireless work for the environment and education to his photographs that will forever capture images of the University he so loved,” Chancellor James Moeser said. “He was a devoted and loyal alumnus who had a very special connection with Chapel Hill. We will miss Hugh deeply.”

This spring, Morton and his wife, Julia, set up the Hugh Morton Distinguished Professorship in Journalism and Mass Communication, for which faculty in all disciplines of the journalism school will be eligible.

Among his University honors were the William R. Davie Award, the highest honor given by the Board of Trustees; the University’s Distinguished Alumnus Award and the General Alumni Association’s Distinguished Service Medal. He was president of the GAA’s Board of Directors in 1964.

He was inducted into the journalism school’s Public Relations Hall of Fame in 1990, and his family donated a photographic portfolio spanning 60 years to the North Carolina Collection in the University’s library. He chaired a committee to raise funds and erect a statue honoring Charlie “Choo Choo” Justice at Kenan Memorial Stadium.

A memorial service is planned for 2 p.m. Friday, June 9, at Greensboro’s First Presbyterian Church, where Julia and Hugh Morton were married 60 years ago. A reception will follow after the service at the Life Center in the building adjacent to the sanctuary.