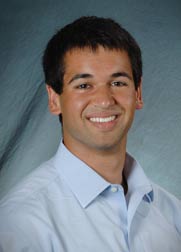 Michael Mian, a junior from Concord who seeks a career in environmental justice and international action on climate change, has been chosen as one of 80 Udall Scholars for 2010.

Mian was among 537 candidates nominated by 256 colleges and universities nationwide for the award, which is given by the Morris K. Udall and Stewart L. Udall Scholarship and Excellence in National Environmental Policy Foundation in Tucson, Ariz.

Congress authorized the Udall Foundation in 1992 to honor the late congressman from Arizona. A trust fund in the U.S. Treasury and private contributions support the foundation. Udall, who served in the U.S. House from 1961 to 1991, advocated environmental conservation and championed the rights of American Indians and Alaska natives. Last year, Congress added the name of Udall’s brother, Stewart, to the foundation’s name for his contributions as secretary of the Interior. Stewart Udall died in March.

Mian brings the number of Udall Scholarships awarded to Carolina students to 14 since the awards began in 1996. The award will cover tuition, books, room and board up to $5,000 for Mian’s senior year.

He, who came to UNC on a Morehead-Cain Scholarship, hopes to earn a joint law and master’s degree in environmental management. He aspires to help resolve environmental disputes while shaping new policies to prevent such disputes from occurring. Climate change is on his front burner.

“Conflict, legal or otherwise, is imminent in negotiating a new carbon-friendly global economy,” he said. “It is to the resolution of this rising conflict, as well as the prevention of future problems of environmental mismanagement, that I intend to dedicate my career.”

Mian is double-majoring in political science and in environmental justice and conflict resolution, a self-designed major, with a minor in entrepreneurship. In December, he was a delegate to the U.N. Conference on Climate Change in Copenhagen.

Before he graduated from the N.C. School of Science and Mathematics in 2007, Mian already had co-founded an organization that would go national. ScienceDays Inc. began with Mian he and 30 of his classmates leading after-school interactive science demonstrations at schools. Now, the nonprofit group has 25 U.S. and Canadian college and high school chapters working to eliminate inequality in science education.

Recently inducted into Phi Beta Kappa, Mian studied abroad last year in Spain, attending the School for International Training in Granada. Morehead-Cain summer experiences have taken him to internships with the Foundation for Sustainable Development in Uganda and the broadcast-film operation of Smithsonian Networks in Washington, D.C. This summer, he will research carbon mitigation projects with the Center for International Forestry Research in Indonesia.