The most picturesque spot on campus will be kind of hard on your camera for most of March, but it should be back to beautiful with the start of spring and the coming deluge of...

Part of Law School Closed Due to Structural Problems 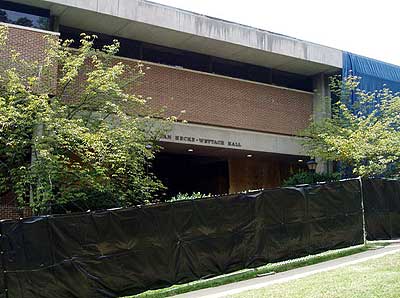 A temporary fence has shut off access to part of the Van Hecke-Wettach Building. (Photo by Laura Johnson)

More than half of UNC’s law school classes have been relocated since the building was evacuated Friday, Aug. 31, due to what appeared to be a structural collapse.

Classes in the building, which dates to 1968, were evacuated that morning after a staff member and several students noticed that the brick façade was bowing away from the building and there were cracks in the sides.

“We immediately got people out of the classrooms that were right there on the fifth floor,” said Matt Marvin, director of communications for the law school. After administration was alerted to the problem, the entire building was evacuated.

But students and faculty soon were allowed back inside. “They ascertained we weren’t dealing with a catastrophic structural issue,” Marvin said. “So not long after the initial alarm was sounded, we had people back in the building.”

Four classrooms on the fifth floor, the largest in the school, and two on the fourth floor remained closed in mid-October, forcing 44 classes to relocate. Those classrooms are expected to reopen Dec. 3, in time for the start of exams. The rest of the building reopened earlier.

The incident was caused by an expansion of bricks in the façade, causing them to push against the windows.

“In the ’60s when the building was built, the code didn’t call for the building to allow for expansion,” Marvin said. He said the expansion could have been caused by a combination of the heat and the age of the building.

Luke Hoff, director of design and construction services in UNC’s facility services department, said the cause was under investigation.

“We have obtained services from an outside structural engineering firm and from two construction contractors and are continuing to work together to first of all protect the public, secondly to identify the cause of the damage and then what needs to take place as far as the action plan to remove and replace the damaged area and to prevent it from happening again,” Hoff said. “We’re still working through all of that. Don’t have a definitive reason. At this time our best guesstimate is that it is a result of expansion due to the prolonged heat that we’ve had over the summer.”

The University also is looking for structural concerns in other buildings. Abbas Piran, director of engineering information services, said his department is extending its ongoing structural inspections to focus on buildings—some built in the 1960s and some later—that feature brick veneer as opposed to solid masonry. “We are stepping that up a little bit” as a result of what happened at the law school, he said.

Donald Hornstein, a professor in the law school, was teaching a class in the building when it was evacuated.

“Twenty minutes into class, a colleague said the deans were going door to door telling people to leave because of a buckling outside,” Hornstein said. “So we all left and went outside. It was exceedingly ordinary—evacuation is a funny term.”

According to Hornstein, the events of that morning were anything but dramatic. The real story, he said, is what has happened since then.

The closing of the six classrooms has caused a total of 44 classes to be relocated. Only 39 classes were not disrupted.

An e-mail went out to students Sunday night, alerting them of the relocation to their classes. “It’s quite remarkable how quickly we did it,” Marvin said. “Since Tuesday, we haven’t missed one class. Our number one priority is to keep our students working toward earning their degrees.”

Among the temporary locations for classes are Craige North residence hall, the Center for Dramatic Art, the School of Government, the Students and Academic Services Building, the Student Union auditorium, Davis Library and George Moses Horton residence hall.

The new locations are causing law students to venture to parts of campus they have never visited before. “We’re learning how nice it is to have your own facility with all these classes right here where you live,” Marvin said. “So however long it takes to fix this, our students are having to live like undergrads again.”