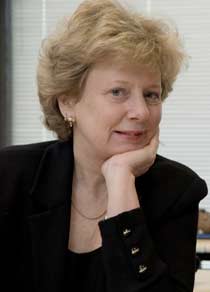 Kristen M. Swanson, a nationally recognized professor and chair of the family and child nursing department at the University of Washington, will be recommended as dean of UNC’s School of Nursing.

Chancellor Holden Thorp ’86 told the Board of Trustees Thursday that they soon would receive a recommendation for approval of Swanson’s appointment by mail ballot. The effective date would be Aug. 1.

“Dr. Swanson has earned a national reputation for her teaching, research and contributions to the nursing field,” said Executive Vice Chancellor and Provost Bernadette Gray-Little. “She has the right experience and skills to build upon an already excellent School of Nursing that is committed to helping meet the health-care needs of North Carolinians. Our nursing students, faculty and staff would get a wonderful successor for Linda Cronenwett.”

Cronenwett will step down in July after a decade as dean and return to the faculty next year as a professor.

In Seattle, Swanson is the University of Washington Medical Center Term Professor in Nursing Leadership. She joined the faculty in 1987 and has chaired the family and child nursing department since 2000.

A fellow of the American Academy of Nursing, Swanson is an alumna of the Robert Wood Johnson Executive Nurse Fellows Program, an advanced leadership initiative for nurses in senior executive roles who aspire to lead and shape the future U.S. health care system.

Swanson’s research has focused on caring, responses to miscarriage, and interventions to promote healing after early pregnancy loss. She developed a theory of caring that she and others have replicated or tested with individuals, families and groups experiencing a variety of health challenges. Swanson’s caring theory has been incorporated into practice and education models in health-care settings around the world. Her most recent research, funded by the National Institute of Nursing Research at the National Institutes of Health, was a clinical trial examining the effectiveness of interventions in resolving the grief and depression of mothers and fathers in the first year after miscarriage.

UNC’s School of Nursing was established in 1950 in response to North Carolina’s need for nurses. It was the state’s first nursing school to offer a four-year bachelor’s degree, a master’s degree in nursing and to launch continuing education for nurses. It was also the first school to offer a doctorate in nursing as well an accelerated bachelor’s degree option for second-degree students. Today, the school enrolls about 600 students and is known for its academic programs, research and commitment to clinical and community service in state, national and global communities.