Moeser to Step Down in June 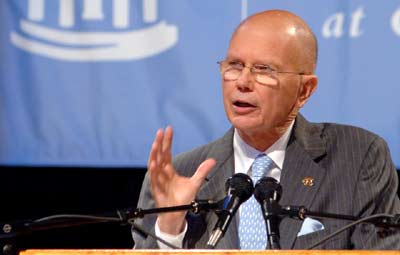 The annual State of the University speech included an unexpected challenge: Find a new chancellor.

An emotional James Moeser told a large gathering of Carolina’s leaders on Wednesday that he would transfer the reins on June 30, 2008. His resignation comes amid a flurry of positive news in UNC’s perpetual quest to be seen as the leading public university in the country and near the close of a $2 billion fundraising campaign that spanned his tenure, reaching its goal 11 months ahead of schedule.

“The principal lesson I learned as a concert artist was always to get off stage before the applause stopped,” said Moeser, a concert organist and teacher before he shifted his career to higher education administration. Then came a long pause while he composed himself to announce the resignation.

In his speech Moeser gave no specific reasons for leaving the position, but his almost eight-year chancellorship would be consistent with those of his predecessors. Only UNC’s first chancellor, Robert B. House ’16, and its sixth, Chris Fordham ’47, served longer than eight years. Moeser, 68, the ninth chancellor since the University gave its top position that title in 1945, came to UNC in August 2000. (A special report on “The History of the Chancellorship,” with individual features on each chancellor and the University’s history, is available online to GAA members. The articles originally appeared in the Carolina Alumni Review.)

His announcement gives the University nine months to find a successor. Nelson Schwab III ’67, immediate past chair of the Board of Trustees, will chair the search committee to recommend a successor.

Moeser said he plans to spend a year on research leave and then return to Carolina to assume “the most exalted title this University can confer on an individual — professor.”

Though Wednesday’s announcement was a surprise, there had been some speculation on the campus that Moeser would bow out at the close of the Carolina First campaign, which is expected to be well past the goal when it ends in December.

He promised to remain “fully engaged in the year ahead. I do not intend to waste a minute,” he told a nearly full audience in the Carolina Union’s Great Hall that included three former chancellors, UNC System President Erskine Bowles ’67, the trustees and most of the University’s top administrators and faculty leaders.

Choking up at the close of a speech that he said he worked on for several months, Moeser said, “This is a place for many years I held in high esteem from afar.” The first time he and his wife, Susan, walked the campus, he said, “we got goose bumps and still get them today. I understand how it captures our students.”

“He is a consummate professional and has led Carolina to accomplish great things,” said Nelson Schwab ’67, immediate past chair of the Board of Trustees. “During our orientation for new trustees last July, I was struck by just how many examples there were of excellence and progress with key initiatives and strategic goals. James has built a wonderful team.”

Said Bowles, “Throughout his tenure, James Moeser has refused to accept anything less than excellence at Chapel Hill, and you can see that excellence everywhere you look — in the quality and diversity of the student body, the outstanding faculty and the state of the facilities on the campus.”

When he arrived in Chapel Hill, Moeser said he expected fundraising to be his most important role. He called it “the major defining lever of change.”

The Carolina First campaign, which began in 1999, met its $2 billion goal in February and since has raised more to help support students and faculty and fund research projects, strategic initiatives and building projects. Most recently, a $5 million gift to the Honors Program will increase the number of first-year students in the  program by 30 percent and create five new professorships.

The University moved into the big leagues of fundraising early this year, when Dennis Gillings and his wife, Joan, gave $50 million to the School of Public Health. At about the same time, the Morehead Foundation nearly doubled its endowment with a $100 million gift from the Gordon and Mary Cain Foundation; the latter does not count in the capital campaign because the Morehead is a private entity.

UNC has exceeded its goal of 200 endowed professorships; doubled its endowment to more than $2 billion during Moeser’s years; and has seen research grant money steadily rise, especially in health-related areas.

The University also made a big push in the physical sciences, in genomics and genetic sciences, and in the arts. A corner of the campus was set aside for hundreds of thousands of square feet in new laboratory and classroom space for the sciences. The same sort of emphasis is under way in the arts, which Moeser identified as being underdeveloped at Carolina. Memorial Hall was re-shaped into a modern performing arts hall and given a diverse, aggressive schedule of events, and a new music building is under construction.

Moeser has been candid in his desire to make the University the leading public university in the nation. Another highlight of his tenure is the Carolina Covenant financial aid program. Unveiled in 2003, the work-study program enables qualified low-income students to attend the University and graduate debt-free; it was the first of its kind among major U.S. public universities. Since its inception, at least 20 other institutions, including the  University of Virginia and Harvard, have created similar programs. The first class of Carolina Covenant scholars will graduate next spring.

This year, it seems, is an especially high point in Moeser’s career — there currently are more than 160 planned and active on-campus construction projects. Faculty retention is the highest it has been in the past five years. In January, Kiplinger’s Personal Finance magazine ranked UNC as the “best value” among the nation’s public colleges and universities for the sixth year in a row.

In the address, Moeser outlined four challenges for the University that he believes will dominate the tenure of his successor — enrollment growth, competition for research funding, finding internal resources for new investments, and faculty replenishment.

Moeser called the enrollment issue the “single most critical issue facing my successor.” The UNC System is expected to absorb 80,000 additional students by 2017, and Carolina will be expected to accommodate its share, putting pressure on every aspect of the campus. “We cannot freeze-frame this campus or imbed it in amber,” he said.

As National Institutes of Health money continues to decline nationally, government funding for the physical sciences is going up dramatically, he said, and UNC must be ready to capitalize. It must “build more bridges” between the biomedical and physical sciences, he said.

He also said the University will face competition from its peer institutions in securing research support and new faculty members. And Carolina will have to attract a lot of professors: Due largely to retirement, University officials expect to replace about five of every eight faculty members over the next eight years.

Moeser hit the ground running eight years ago, following the brief interim chancellorship of William O. McCoy ’55 in the wake of the death of Michael Hooker ’69, who died of cancer at age 53. On his formal arrival day, Moeser said he already had phoned state legislators about the accelerating battle over funding for new campus facilities.

Growing up in Texas, Moeser had wrestled with other ambitions — law and architecture among them. At Carolina, the architect in him was evident as he kept a close watch on building and renovation projects, insisting that UNC not repeat previous practices of refurbishing historic buildings on the cheap.

Moeser went to Penn State as dean of the College of Arts and Architecture and executive director of University Arts Services — colleagues had seen a flair for leadership in the musician.

After six years at Penn State, Moeser was named vice president for academic affairs and provost of the University of South Carolina. He was hired at Penn State by then-President Bryce Jordan ’56 (PhD).  He had decided before going there that his concert career was over. He stayed at South Carolina four years before going to the University of Nebraska, where he was chancellor for four years.

On Tuesday, he told his audience, that “this University is on an incredible roll,” making progress toward nearly every goal it has set.

“We love this place, but we must not let our love lead to complacency or self-absorption,” he cautioned.

More on the announcement.