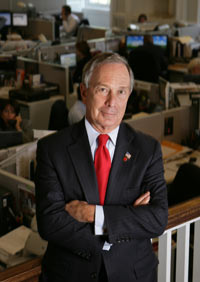 Chancellor Holden Thorp ’86 will preside during the ceremony on May 13 at 9:30 a.m. in Kenan Stadium. Bloomberg also will receive an honorary doctor of laws degree.

“Mayor Bloomberg has had an extraordinary career in business, philanthropy and public service,” Thorp said. “His innovative approach to public service as mayor of New York City and entrepreneurship in starting Bloomberg L.P. are experiences that Carolina students can identify with and find inspiration from. We’re honored that Mayor Bloomberg accepted our invitation to speak. He will help make Commencement very special for our graduates and their families and friends.”

Thorp chose Bloomberg in consultation with the University’s Commencement Speaker Selection Committee, which is made up of an equal number of students and faculty.

Bloomberg was first elected mayor of New York in 2001, just two months after the terrorist attacks on 9/11, a time when many believed that crime would return, businesses would flee and New York might never recover. Instead, through hundreds of innovative new policies and initiatives, Bloomberg is credited with making New York City safer, stronger and greener than ever.

Born in Boston and raised in a middle class home in Medford, Mass., Bloomberg attended Johns Hopkins University, where he paid his tuition by taking loans and working as a parking lot attendant. After college, he earned an MBA from Harvard Business School.

In 1966, he was hired by a Wall Street firm, Salomon Brothers, for an entry-level job. He quickly rose through the ranks, overseeing equity trading and sales before heading up the firm’s information systems. When Salomon was acquired in 1981, he was let go from the firm.

With a vision of an information company that would use emerging technology to bring transparency and efficiency to the buyers and sellers of financial securities, he launched a small startup company called Bloomberg LP. Today, Bloomberg LP has more than 300,000 subscribers to its financial news and information service around the globe. Headquartered in New York, the company has about 13,000 employees worldwide.

As his company grew, Bloomberg started directing more of his attention to philanthropy, donating his time and resources to many causes. He has sat on the boards of numerous charitable, cultural and educational institutions, including Johns Hopkins University, where, as chairman of the board, he helped build the Bloomberg School of Public Health into a leading institution of public health research and training.

He officially entered public life in 2001 when he entered the race for New York mayor. After taking office, he took control of the city’s public school system and turned it around by raising standards, promoting innovation and holding schools accountable for success. He spurred economic growth and job creation by revitalizing old industrial areas and strengthening key industries, including new media, film and television, bio-science, technology and higher education. The mayor’s Five Borough Economic Opportunity Plan helped bring the City through the national recession as quickly as possible and helped avoid the level of job losses that many experts had forecast and that other cities experienced. He has also launched programs that encourage entrepreneurship, combat poverty and help people acquire the skills they need to build careers.