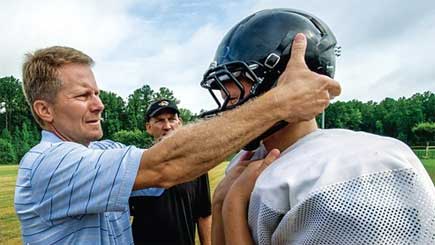 Kevin Guskiewicz co-directs UNC’s Brain and Body Health Program and is a leading expert on the long-term impact of head traumas at all levels of sports competition. (Photo by Donn Young)

The University has been selected by the National Football League Players Association to participate in a new initiative aimed at providing medical services and support to its former players.

The NFL Players Association unveiled its new program, called The Trust, on Nov. 13. UNC’s Brain and Body Health Program, which was created by the Center for the Study of Retired Athletes in collaboration with UNC’s School of Medicine, was selected to be a medical partner of The Trust to provide former NFL players with a comprehensive evaluation and treatment plan for their cognitive and physical functioning. Other medical partners in The Trust are Tulane University and the Cleveland Clinic.

“This partnership with the NFL Players Association will provide former NFL players with better access to our expert sports medicine professionals for comprehensive assessment and clinical care,” said Kevin Guskiewicz, co-director of the Brain and Body Health Program and a leading expert on the long-term impact of head traumas at all levels of sports competition.

Guskiewicz also is research director for the Center for the Study of Retired Athletes, Kenan Distinguished Professor of exercise and sport science and senior associate dean of natural sciences. His work was featured as the cover story of the September/October 2013 issue of the Carolina Alumni Review.

“Through this award, our team of nationally recognized physiatrists — physicians who specialize in physical medicine and rehabilitation — will monitor and manage the health of former NFL athletes with an interdisciplinary team of specialists, neuropsychologists, therapists and other colleagues to give each individual highly personalized care,” said Michael Y. Lee, the Brain and Body Health Program’s co-director. Lee also is department chair of physical medicine and rehabilitation in the medical school.

The NFL has come under increasing public scrutiny with regard to the long-term health of former players, mainly due to increased fear of the impacts of concussions on their health long after they retire from the game.

The program, which saw its first patients in the spring of 2012, was designed to address the needs of former players who are in need of a baseline medical evaluation upon leaving the NFL as well as those who may be experiencing physical and mental problems as a result of the toll on their bodies after years on the playing field. These problems can include musculoskeletal pain that has led to lifestyle changes and psychological problems; anxiety about transitioning out of the sport; chronic headaches and other post-concussion signs and symptoms; increased episodes of sadness, irritability or depression; and early signs of memory impairment.

Services will include an initial screening and medical history, an evaluation with a sports medicine physiatrist and internist, a neuropsychological evaluation, an evaluation by a cognitive neurologist, magnetic resonance imaging, a body composition and dietary consultation by an exercise physiologist and life skills coaching and transition counseling. These will be provided at the UNC Health Care System’s new UNC Center for Rehabilitation Care and at the Center for the Study of Retired Athletes, located in UNC’s Stallings-Evans Sports Medicine Center.

As the program expands, the UNC team is expected to involve clinical partners from NorthShore University Health System, Evanston Hospital, in Evanston, Ill., and the University of Virginia.