He always said he’d go on coaching Carolina as long as his health allowed, but deep down, Roy Williams said Thursday, he knew the end would come when he no longer thought he was the...

Hubert Davis flashes a smile as he visits with friends and family after he was introduced as UNC’s new men’s basketball coach on Tuesday at the Smith Center. (News & Observer/Robert Willett)

Those who assume basketball comes easy to Carolina guys are finding out quite the contrary where Hubert Davis ’92 is concerned.

He had two scholarship offers going into his senior year in high school. Dean Smith came to his parents’ house and suggested he go to school somewhere else. Davis left his player-coach relationship with Larry Brown ’63 thinking — for several years — that one of Smith’s first stars just didn’t like him. He had a transformative turnaround after he was rejected by legendary NBA coach Don Nelson.

In 2014, Davis told a writer that nine years ago, when he took the job as assistant to Roy Williams ’72 (’73 MAT), “I would say only four coaches ever came up to me … and said, ‘Hubert, I’m really happy for you.’ Everybody else said, ‘What are you thinking?’ And I didn’t understand that. I was caught off guard. I really was. And I was like, ‘What are you talking about?’ ”

The emotion he displayed as he was presented as Carolina’s new head coach on Tuesday was part all that and part determination to perpetuate the magic Smith started and that his assistant Bill Guthridge and Williams continued.

Davis, who helped lead the Tar Heels to the 1991 Final Four as a sharpshooting guard and to two Final Fours and a national title as an assistant coach — his only coaching experience — succeeds Williams, who announced his retirement last week.

“I wanted to be a part of this history,” he said. The past nine years, he said, “it hasn’t been a job at all. It’s been missionary work.” 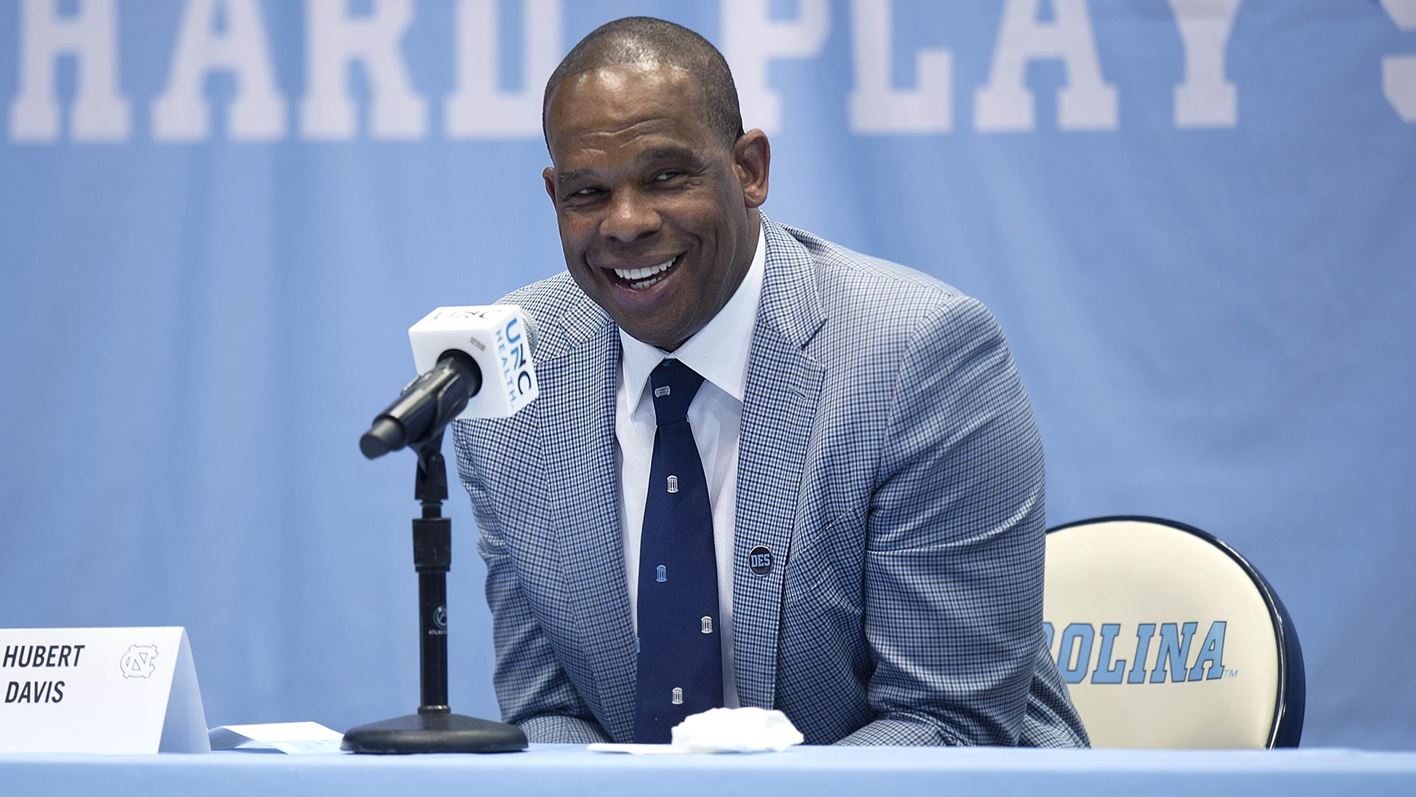 “North Carolina is the standard. There’s nobody that has family like here at North Carolina,” Davis said at the news conference Tuesday that formally introduced the former player and assistant coach as the Tar Heels’ head coach. (goheels.com)

And from there, his news conference on Tuesday in the Dean E. Smith Center was a family party.

His coaching staff likely will be, too, he said.

He said he’d like to have on his staff someone who played for each of the three aforementioned coaches. “I want to be able to connect all of those.”

Davis spoke about coming into the gym as a youngster, always looking first for his dad in the grandstand, how it felt to know there was at least one person there just for him. He said that after playing for Smith and Guthridge, Williams made him feel that same way when they coached together.

“North Carolina is the standard. There’s nobody that has family like here at North Carolina. I’ve always wanted to walk the same road, the same path as Coach Smith and Coach Guthridge and Coach Williams.”

He said on Monday: “I love this University. I played here, I earned my degree here, I fell in love with my wife here, I got married here, I moved here after I retired from the NBA, and I have raised my family here. I am proud to lead this team, and I can’t wait for all that comes next.”

Athletics Director Bubba Cunningham said: “Hubert Davis is the best leader we can possibly have for our men’s basketball program. He teaches student-athletes on and off the court. He inspires his fellow staff members. He is strongly committed to family. He has a tenacious, burning desire to be the best he can possibly be; we witnessed that when he was a player, a broadcaster and an assistant coach — and I have no doubt he will ensure that our student-athletes and program will be the best they can be, as well.”

The nephew of former UNC standout and NBA All-Star Walter Davis ’77, Hubert Davis grew up in Burke, Va., and played in 137 games for the Tar Heels from 1988 to ’92. Carolina went 102-37 during that span, winning the 1989 and 1991 Atlantic Coast Conference tournaments and advancing to the 1991 Final Four, where he scored 25 points in the national semifinals against Kansas. He had 23 games with 20 or more points, and he still holds the UNC record for career 3-point percentage (.435).

After graduating with a degree in criminal justice, he was the 20th pick by the New York Knicks in the 1992 NBA draft and went on to play professionally for a dozen years, scoring 5,583 points. He currently has the second-highest career 3-point percentage in NBA history at .441. He was with the Knicks for four years, traded to the Toronto Raptors prior to the 1996-97 season. After Toronto, Davis was with the Dallas Mavericks, Washington Wizards, Detroit Pistons and New Jersey Nets. Davis played his final NBA game in 2004, finishing with career averages of 8.2 points, 1.5 rebounds and 1.7 assists per game.

Nelson came to New York when Davis already was a starter for the Knicks.

“My first conversation with Don Nelson was, ‘You never will play for me,’ ” Davis recalled. “He says, ‘I know you can shoot the basketball, but I need a basketball player.’ He said: ‘I don’t need anybody that just wants to shoot. I need somebody that can defend, rebound, handle the basketball. … I just don’t need a one-dimensional player.’

“I said, ‘Wow, that was a real nice conversation to your starter in the first conversation. I appreciate it.’ And he just walked away.

“And I’m so thankful that he had that conversation with me because he told me exactly what I needed to hear as opposed to what I wanted to hear. And what happened was I started working on my ball handling.” And his rebounding, his defense and more. “I started to become a player. And because of him, the last four years that I was in the NBA I played point guard, and that wouldn’t have happened if he didn’t challenge me there.”

In Detroit, late in his playing days, he thought he still could be of value. Brown didn’t agree and wouldn’t put him in the rotation. Davis asked and was granted a waiver, and he’d not spoken to Brown since. Last week, after Williams said he was leaving, Brown texted Davis and said, “I would love for you to be the next head coach at the University of North Carolina.” Brown said if that happened, it would have put a smile on Dean Smith’s face.

Davis worked for seven years with ESPN as an analyst and co-host of College GameDay after retiring as a player. 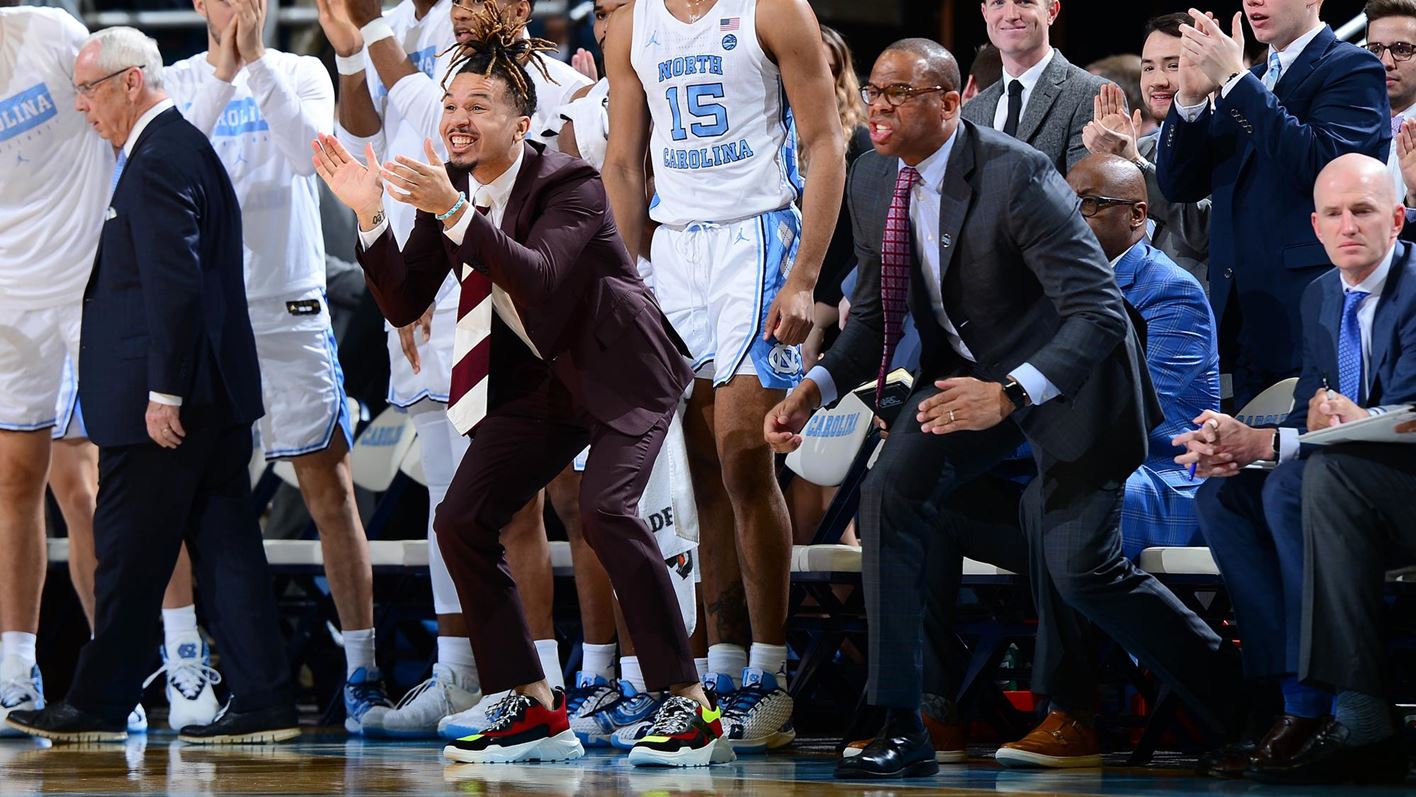 Davis has been on the Tar Heels’ sideline as an assistant coach to Roy Williams ’72 (’73 MAT) for nine years. (goheels.com)

“I knew the day would eventually come when I would need to replace staff members as they moved on,” Williams said when he hired Davis in May 2012. “For the last four or five years, Hubert has always been on my mind in case a spot did come open. I didn’t know if I could get him to come back, but I knew I wanted him to be the first option. Coaching is about teaching, relationships and passion, and I feel Hubert is the perfect choice.”

When Smith and Williams visited Davis the high school player in his home, Smith told Davis and Davis’ parents that George Mason or George Washington might be the place for him to play. He said, according to Davis and Williams: “I don’t know if you’re ever going to be able to play here.” Davis replied: “You’ll never know unless you give me a chance.” A couple of days later, Smith called Davis and said, according to Williams and Davis: “I listened to what you said, and I’m going to offer you a scholarship to North Carolina.” Davis committed to UNC immediately. And he became a superb player in Chapel Hill.

“Nine years ago, Coach Williams gave me another chance and opportunity,” he said Tuesday.

The pandemic has kept Davis and his dad apart for the past year. Recently, they reunited.

Now, he said, “Every game, every second, every possession, North Carolina will be there.”

Davis and his wife, Leslie ’93, have three children: Elijah, Bobbie Grace and Micah. He began his duties as head coach immediately. Terms of his contract agreement have not been released.