No Time for Fear, No Need for Pity

Psychology professor Steve Reznick '73 was diagnosed with ALS in 2013. “I am deeply committed to my strategy of having a long, happy and interesting life,” he said, “and hopefully conducting some research that will determine what causes this damn disease.” (Photo by Mark Terry '95)
Posted on Jan. 8, 2016

He couldn’t lift it.

It affected his typing.

“I crafted a brace that used a rubber band to lift my right ring finger, thus allowing me to pull it down onto a key,” said Reznick ’73.

That September, he went to a hand surgeon and, later, an occupational therapist to find out what was wrong.

“They couldn’t figure it out,” Reznick said.

Man on a mission

Reznick has always been a man on a mission.

That orientation no doubt developed, he said, when he was a little boy helping out in the family business — the record store that his father and mother had built into a downtown institution in Winston-Salem by the time he reached high school in the late 1960s.

But by then, the mall had opened, and Reznick’s father could foresee that the store’s inevitable decline.

“Before I left for college, I remember him telling me, ‘I will burn the store down before I let you come back here and take it over,’ ” Reznick said.

His father wanted him to seek his own opportunities, pursue his own dreams, and Reznick happily obliged.

His interest in psychology emerged while studying operant conditioning in pigeons as an undergraduate student at Carolina. After graduating in 1973 with a psychology degree, he earned his master’s degree in general psychology at Wake Forest University, then started his doctorate work at the University of Colorado in Boulder, where his research focused on the cognitive development of infants.

That interest would lead him to Harvard and later Yale before it brought him back to Carolina in summer 1998. It was like coming back home, he said.

He likes to tell people, “I came back to Chapel Hill for my 25th reunion and just stayed.”

Throughout that summer, Reznick assumed that the problem with his finger was a simple muscle problem. It was not until October that a neurologist told him the cause: amyotrophic lateral sclerosis or ALS — also known as Lou Gehrig disease.

The progressive lethal illness was confirmed at Columbia Hospital in November and again at Duke Hospital in December.

He resolved to waste no more precious time with fear or self-pity.

Reznick said he has always thought of himself as a “meliorist,” a person who believes that the world can become a better place. With that belief, Reznick said, comes the obligation to do all that you can to make it better.

And so he did.

Over the course of his career, he had collaborated with fellow scientists and clinicians to develop a system for patients to watch for and record patterns of behavior in their babies that could be early warning signs for autism.

Almost from the time he arrived back to Carolina, he began expanding his interests — and service — beyond the bounds of his research lab and classroom.

As a member of the Faculty Athletics Committee, he led the effort to develop a registration priority process that addressed scheduling conflicts for groups ranging from student-athletes to ROTC students to Robertson Scholars.

As president of the Faculty-Staff Recreation Association, he was the driving force behind upgrading the facilities (known as “the Farm”), including replacing the rundown farmhouse that had served as the office with a modern building.

How did he get involved with so many projects?

When you believe you can make a difference — and have an obligation to do so — “it is hard to say no,” Reznick said.

Having ALS, he realized, did not free him from that obligation. Even if he could not move a muscle, he would always be able to exercise his will.

He had always been a teacher, a scientist, a leader committed to service.

He still could be all those things, he realized. Only now, he would have to do them as a patient, teaching and inspiring others by sharing his own experience.

And so he has.

Even though he has been on disability leave since 2014, Reznick continued conducting research with his students and became a participant in several ongoing projects in which a scientist with ALS brings a unique and potentially valuable perspective.

“The other positive aspect of my experience is that I feel so totally supported by my wife and my family, and I have reconnected with hundreds of old friends, colleagues and students who have renewed their connection with me,” Reznick said.

Reznick spelled out his plan on his personal homepage when he wrote, “I am deeply committed to my strategy of having a long, happy and interesting life and hopefully conducting some research that will determine what causes this damn disease.”

On a sunny afternoon in November, the grand room inside Graham Memorial filled to capacity many of the people whose lives Reznick had touched in some way. 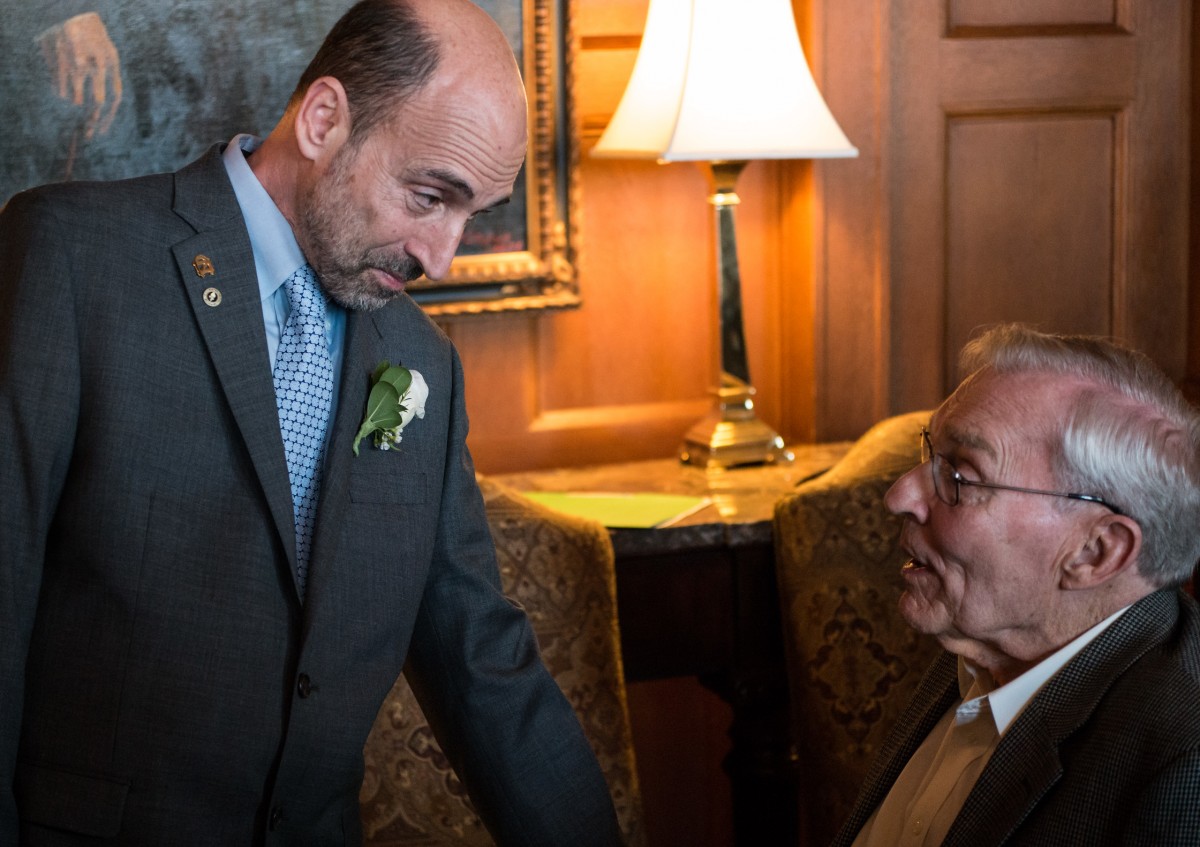 There were deans, athletic directors, coaches, colleagues and former chancellors, including former Chancellor Paul Hardin, whom Reznick had befriended after learning Hardin also has ALS.

Also present were members of his family, including his father, Joe, his wife, Donna, and their daughter, Leah, along with Jon Tyner, the young man who would become his son-in-law the next day.

They all watched silently as Farmer took to the podium to state the business at hand: Reznick’s induction into the Order of the Long Leaf Pine.

This beautiful and storied place, Farmer began, “was the perfect place to honor and recognize Steve” because it was named for former UNC President Edward Kidder Graham (class of 1898), who had done so much to “connect what we learn and teach and discover on this campus to the needs of our brothers and sisters far beyond.”

“And so it is right that we are gathered here today in this place to honor a person who embodies this idea.”

Karen Gil, the outgoing dean of the College of Arts and Sciences, along with her successor, Kevin Guskiewicz, spoke about Reznick’s many contributions to the campus — and beyond. 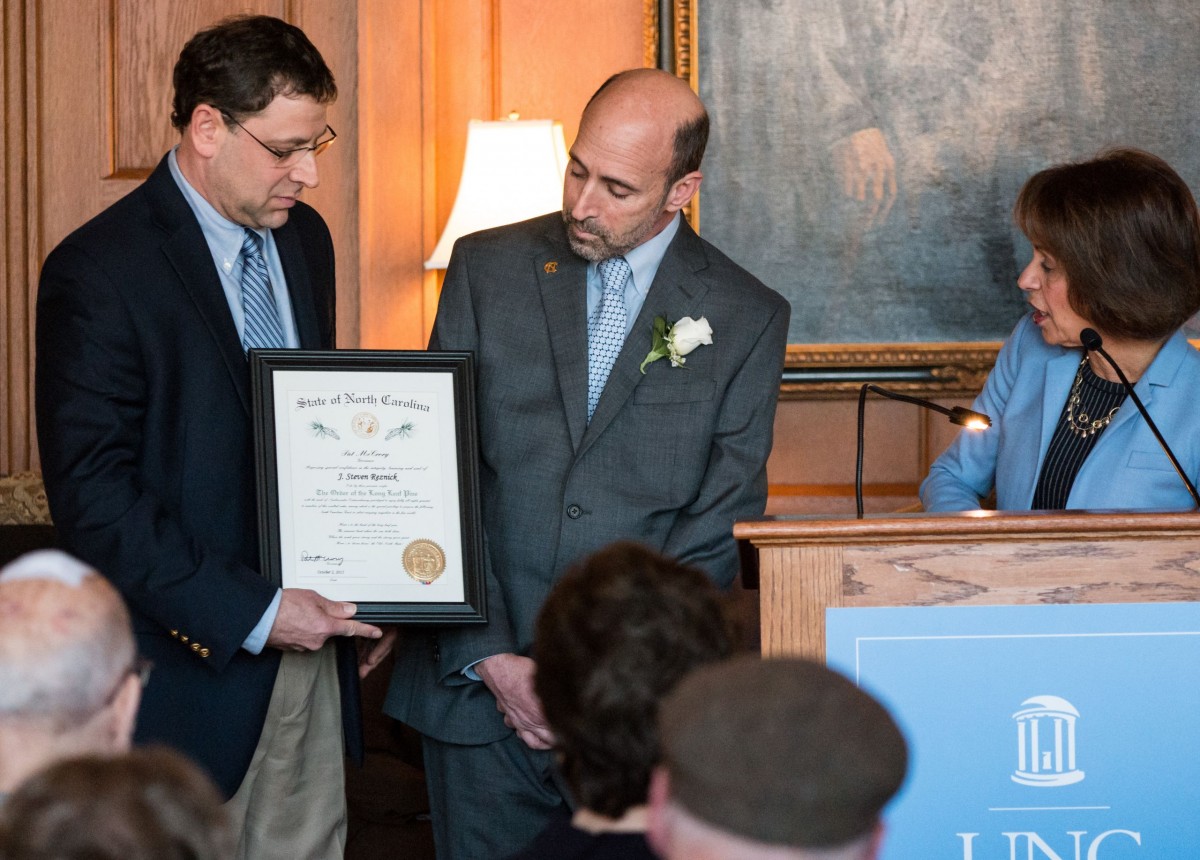 Reznick — who will retire in July — was inducted into the Order of the Long Leaf Pine by Chancellor Carol L. Folt and Daniel Gitterman, the Thomas Willis Lambeth Distinguished Chair in public policy who nominated Reznick for the award. (Photo by Mark Terry ’95)

And then Reznick — who will retire in July — was called up to the podium to stand next to Chancellor Carol L. Folt for the induction ceremony. Also joining them was Daniel Gitterman, the Thomas Willis Lambeth Distinguished Chair in public policy. Gitterman, who nominated him for the award, unwrapped the plaque that Reznick’s arms were too weak to hold as the audience stood and burst into applause.

Everybody who mattered so much to him was there, Reznick noted, including the one group that perhaps matters most of all.

“I see a lot of my students here, and I will take this as good evidence that the statement you have heard me make might be true: ‘It ain’t what you know, and it ain’t who you know that matters, it’s who knows you and what they think of you.’ ”