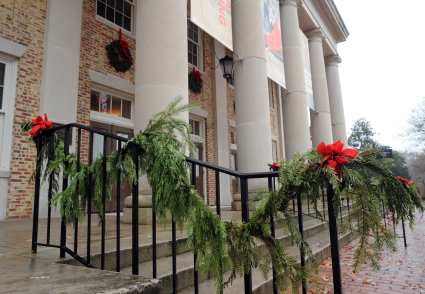 The front of Memorial Hall is festooned with greenery and ribbons in mid-December. (Photo by Dan Sears ’74)

UNC’s library administration decided not to put up Christmas trees this season in Wilson and Davis libraries following complaints over several years by some library staff and patrons who opposed the singular focus on the Christmas custom.

The media coverage of the decision has set off a flood of calls to the University, many of them from alumni angry that the two trees were left in storage this year. Fox News and the Christian Broadcasting Network picked up stories from N.C. newspapers and TV stations. The chancellor’s office had received about 200 e-mails and phone calls by early in the week of Dec. 8. The GAA has received a number of complaints about the library’s decision, including some promises to not renew memberships.

On various Web sites, aficionados of Duke and N.C. State universities claimed new reasons to dislike UNC, although a UNC spokesman noted that the decision is consistent with the practice in libraries at Duke and State.

The decision by Sarah Machalak, associate provost for University libraries, affected only the lobbies of the two buildings. The display of trees, wreaths and other signs of Christmas in the holiday season is left to individual units on the campus. In an effort to show that the spirit is alive in many corners of Carolina, the University’s News Services office responded with not only a message from the chancellor but a short video showing wreaths on Memorial Hall, a poinsettia centerpiece in South Building’s lobby, two live turtledoves in The Carolina Inn, a Yule commercial display at Student Stores and Christmas trees in various offices.

“At Carolina, departments are free to put up a Christmas tree … or not,” Chancellor Holden Thorp ’86 wrote. “And if you take a walk across campus, I think you’ll see that. … Our own Carolina Inn is again featuring its Twelve Days of Christmas displays throughout the hotel. And just as we have for the last 59 years, our Morehead Planetarium and Science Center is featuring [the star theater show] The Star of Bethlehem. So Christmas is recognized on this campus.”

The spirit is, in fact, alive in the libraries as well.

Michalak said staff members’ displays of the trappings of the season are found throughout the buildings. She said her decision on the common-area trees would be reviewed next year.

“It’s hardly recognizable now in the media from what we originally intended,” said Michalak, who added that Christmas is one of her favorite things. She said that among the people who asked that the trees not be displayed in the lobby were some of the “stars” of the library staff, who said that out of respect for staff and patrons who might find celebration of one particular custom objectionable, “it would be nice if we didn’t do this public display. It seemed like the Christmas spirit to make these people feel included.”

In the interest of full disclosure, the George Watts Hill Alumni Center features Christmas trees on each of its three main floors, one of which was decorated by staff members amid the singing of Silent Night and other Christmas carols. Listen to the carols performed by the UNC Loreleis.

You can read the chancellor’s full message and watch the video online.