Carolina basketball fans notice every move head coach Roy Williams ’72 (’73 MAT) makes — from donning retro Air Jordans in a game against Duke to uttering his latest “Roy-ism” to dancing in the locker... 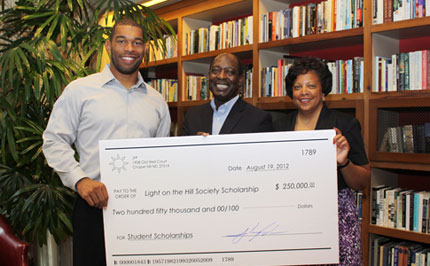 Peppers already had donated $100,000 to the fund in 2009. The scholarship program is a tribute to Carolina’s earliest African-American graduates and a vehicle for alumni and friends to support African-American freshmen who exhibit academic excellence and the potential to contribute while at UNC and after graduation.

In a statement issued Saturday by Peppers, he thanked University academic and athletic staff for their help and guidance while he charted a course for his life and expressed gratitude for the role the campus played in his growth and development. He also said he was “thinking of ways that I can use my experiences and resources” to help support students early in their college career.

“After considering the ways that I might be able to help young college students, I decided to continue my support of the Light on the Hill scholarship,” said Peppers, who came to Chapel Hill on Saturday to make the announcement. “I would like to endorse this particular fund and encourage other former UNC students who have found success to reach back and assist the efforts of current and future Tar Heels.”

At UNC, Peppers starred as a defensive end and won the Lombardi Award, given to the country’s top college lineman. He was a unanimous All-American in 2001. He also lettered in basketball at Carolina and helped the Tar Heels’ reach the 2000 Final Four.

His name came up last week with regard to the academic scandal involving the department of African and Afro-American studies after his academic transcript was found published on a UNC website. What originally was characterized by UNC officials as a “test transcript” — used to help students and advisers use a computer program that helps plot a student’s course of study — turned out to be Peppers’. Chancellor Holden Thorp ’86 said on Friday that he did not yet know how it came to be published.

Questions arose over whether the transcript, which shows a low-performing academic record for three years — a 1.824 grade point average — was more evidence of fraud in the department. Peppers was an AFAM major.

“This gift is indicative of the kind of man Julius Peppers has become,” said Richard “Stick” Williams ’75, chair of the Light on the Hill Society board. “I am very proud that he credits his experiences at Chapel Hill for helping to shape him. He has really thought deeply about his life, opportunities taken, opportunities lost, his legacy. With this generous gift he wants to help young people make good decisions during their college years.”

The scholarship is administered by the Light on the Hill Society board of directors and supported by the UNC General Alumni Association. Peppers’ agent, Carl Carey ’00 (PhD), who also was his academic adviser when Peppers was a student, is a member of the board.

Peppers was picked No. 2 overall in the 2002 NFL draft by the Carolina Panthers, where he played eight seasons. He is entering his third season with the Chicago Bears. He has been selected for seven Pro Bowls.